How secure will this be against brute-force attacks?

So it's basically just an AES-256-CBC encryption with a salt.

How easy would it be to crack this by brute force? (Assuming the attacker knows that we have aes-256-cbc with salt and that the original password is hashed.) For instance, how long time would it take these days, on "normal" hardware?

I don't know how you're adapting the digest of SHA-1 to meet the key requirement of AES-256 (stretching the 160 bit digest into a 256 bit key), but if you somehow have a way of doing that without seriously compromising key entropy, then you have a theoretical key space of $2^{256}$. That window is limited by the limitations on your encryption passphrase however. In an ideal case for decryption where the person cracking your cipher has your program and knows the limits on your passphrases, they don't have to test all $2^{256}$, only your possibilities.

Arguably, it is currently impossible to decrypt even in the above worst-case scenario. This is largely due to another factor: verification of success. Say you only had $200$ possibilities. Someone trying to decrypt the file needs a way to check if each of the $200$ attempted keys yielded accurate results. Given that they may not know the nature of the file, that seriously complicates the process.

You're good for a while.

Your example features an 8 character password. If I know I have to test all 8 character alphanumeric passwords, that's 62^8 tests, or only 218 trillion attempts. If a desktop machine can test 10 million passwords per second, it will have searched the space in about 21 million seconds (252 days).

But who is attacking? What is their motivation? If it's a national security organization, their idea of a normal password cracker is different than yours. A criminal organization wanting to steal millions of dollars from a stock brokerage or a bank would certainly invest $100,000 in cracking it quicker. They would likely farm such a task out to a botherder, who might assign 1,000 internet zombie machines to crunch away at the task, cracking it in a day or two.

It depends. If your password requirements are weak, it's probably not too difficult to brute force given your weak key derivation (SHA-1). OpenSSL already does key derivation for you (the -salt parameter is a part of that), but if you wish to do it yourself, you should use something like PBKDF2 with 100,000+ rounds and a randomly-generated (for each file, if possible; otherwise, once) salt.

If you do this and pass the key into the command line with -K, however, you will also need to take care of the IV requirements of CBC, which require generating a cryptographically random string of appropriate length, sending it along with the -iv flag, and storing it alongside the file.

This doesn't add anything. OpenSSL already provides a proprietary method of key derivation / key stretching. So you have added a single hash to protect the hash that is already performed.

OpenSSL's key derivation uses only one iteration by default. If you want to make the key derivation more secure, you should up the iteration count (or work factor). That is however not possible using the command line interface

You could either choose to patch OpenSSL or you could create your own program and configure PBKDF2 from that.

That all said, using a good password is going to help you much more than hashing a weak password and a large work factor. A really insecure password will stay insecure forever.

It all depends on your restriction of length of initial password. If your user is able to enter password of just 4 characters, then doing SHA1 etc is not going to add any entropy (in simple words the brute force space for the attacker is not going to increase). Assuming attacker can check One million password per second then below is a summary for your password lengths (password contains Alphanumeric and special characters) 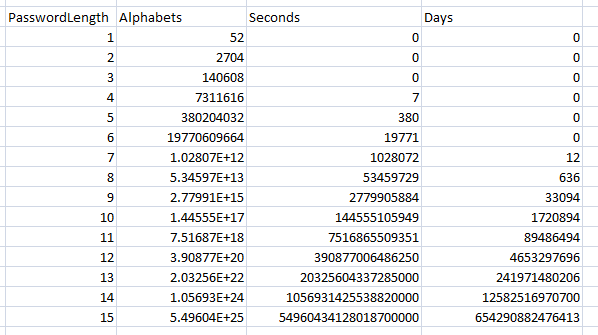 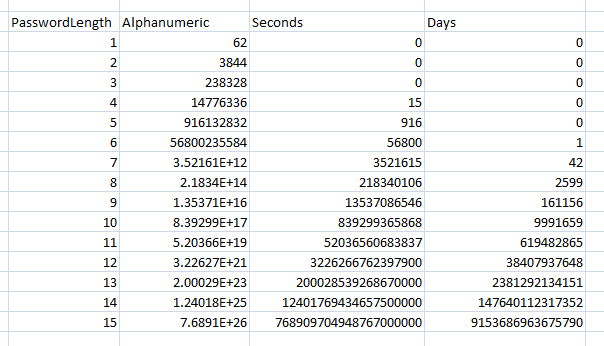 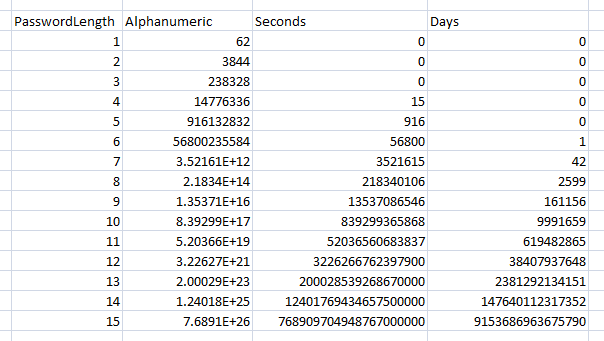 This give you much confidence that attacker cant brute force with 10 more characters. But remember attacker is always going to bypass such brute force effort by using some other means like dictionary base password guessing or some weakness in your implementation, or even he can recover the password if you store it somewhere. So there are always otherways :)

This is easily cracked if you encrypt Bitmap Picture with CBC mode cipher since the 128 bits data block will be the same on bitmap pixels.

Not the answer you're looking for? Browse other questions tagged encryption aes salt or ask your own question.

3
Are there public slow-but-strong algorithms out there that resist brute-force attacks better?
4
How to use salt when there is only one user
1
Importance of salt when deriving an encryption key
1
How much pre-hashing a password increase security against brute force attack?
3
Security of this scheme
1
How to brute force sqlcipher encrypted file with MD5 hash of a 7 bit key?
0
Some Questions about salts
3
What is the most secure way to check that a given masterkey is valid?
2
How to protect against brute force attacks in the case of a small dictionary?