Is there such a thing as perfect CPA security? 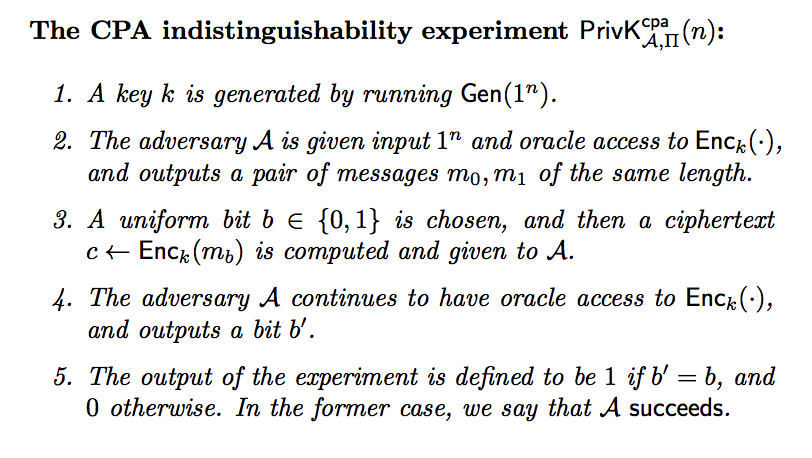 If we require that $$\operatorname{P}\left( \mathcal A \text{ succeeds} \right) = \frac{1}{2}$$ for any adversary $\mathcal A$ in order to call the scheme $\Pi$ perfectly CPA secure, can such a scheme exist?

It would seem like this definition cannot be met since the adversary can use the oracle access to compute $\text{Enc}_k(m_i)$ for $i=1,2$ as many times as necessary until one of them coincides with $c\leftarrow \text{Enc}_k(m_b)$, at which point $\mathcal A$ knows what $b$ is. Is my thinking correct?

The CPA indistinguishability experiment definition that you give is taken from Katz & Lindell's textbook. In my copy (2nd Ed.), it's on page 74.

It would seem like this definition cannot be met since the adversary can use the oracle access to compute $\text{Enc}_k(m_i)$ for $i=1,2$ as many times as necessary until one of them coincides with $c\leftarrow \text{Enc}_k(m_b)$, at which point $\mathcal A$ knows what $b$ is. Is my thinking correct?

One thing you're missing is that earlier the chapter stipulates that only probabilistic polynomial time (PPT) adversaries will be considered. Earlier in the chapter (pp. 49-50):

However, when it comes to the computational power of the adversary, we will from now on model the adversary as efficient and thus only consider adversarial strategies that can be implemented in probabilistic polynomial time.

So the first problem with your adversary is that you've not demonstrated that it is a PPT algorithm. Significantly, if the number of calls to the encryption oracle is an exponential function of one of the security parameters (as brute force guessing algorithms tend to be), then it's disqualified.

The second problem is that the encryption algorithm is also PPT (see Definition 3.7, p. 52), which means it's probabilistic—it's allowed to make random choices. This means that you can't assume it's the oracle is mathematical function—calling $\text{Enc}_k(m)$ multiple times with the same $m$ can (and should!) produce different results.

Your adversary almost works, but not quite. If we denote by $N$ the cardinality of the set from which $\mathrm{Enc}$ (uniformly) chooses its random tape, then each call of the oracle will have a $1/N$ probability of choosing the same random tape as the one chosen during the actual encryption, or in other words a $\frac{N-1}{N}$ probability of not choosing it. After $k$ tries, there is a $\frac{(N-1)^k}{N^k} > 0$ probability that a match has not been found, hence your adversary does not always halt.

If it were possible for the adversary to arbitrarily choose $\mathrm{Enc}$'s random tape during an oracle call, then it could try them all, which would ensure that a match is always found, but that is not the case.

Not the answer you're looking for? Browse other questions tagged chosen-plaintext-attack perfect-secrecy or ask your own question.

3
Proving that there is no scheme which would be perfectly CPA-secure
1
To which game-based security definition is Perfect Secrecy equivalent?

2
Why is an Encrypt-and-MAC scheme with deterministic MAC not IND-CPA secure?
1
Is my understanding of CPA indistinguishability experiment correct?
2
IND-CPA Security
11
CPA-security of a pseudorandom permutation encryption scheme
4
Perfect Secrecy for two distinct messages
9
Are there deterministic private-key encryption schemes that are CPA-secure?
3
Proving that there is no scheme which would be perfectly CPA-secure
1
Unforgeable CPA-secure private-key encryption scheme that is not CCA-secure
6
Is non-adaptive CPA strictly weaker than standard CPA security?
2
Question on the CPA-security proof of the CTR-Mode