Someone discover two pair privkey for one address

I have a question about bitcoin privkey: If you have TWO pair privkey(compressed and uncompressed) I wrote again TWO pair, yes i know, many person say - it is not possible, but...

And this works with many other address, can anyone can make algorithm for compute privkey from pubkey

Pubkey is the same for both pair

Clarifying what is what

And then there's the fact that an elliptic curve public key is different from a compressed/uncompressed Bitcoin public address.

Diving into your question

Pubkey is the same for both pair

is so low that I am pretty sure that

Which finally brings us to the core of your question:

can anyone can make algorithm for compute privkey from pubkey

If you then look at the fact Bitcoin doesn't use the elliptic curve public keys directly but instead Bitcoin addresses which are generated by additionally using RIPEMD-160 and SHA-256 hashes (think: one-way compression functions), you're talking about a scenario I regard to be nonexistent.

To be able to generate the private keys from public Bitcoin addresses, you would need to be able to revert cryptographically secure hashes back to their input — which is not possible for the two hash functions used. Also, a hash digest generally does not contain enough data to reconstruct its input from the digest — hence the name "digest".

Even if you would — by sheer magic — be able to reconstruct the input $x$ of an $\text{RIPEMD160}(\text{SHA256}(x))$ function, you'ld then have to break ECDSA (Elliptic Curve Digital Signature Algorithm) to reconstruct the private ECDSA key from the reconstructed $x$.

If that were possible, ECDSA would be broken and immediately rendered insecure… with according consequences to hundreds of use-cases out there. At the time of writing this answer, no such weakness is known.

For a more detailed view on how a Bitcoin address is generated from an elliptic curve public key, check this: 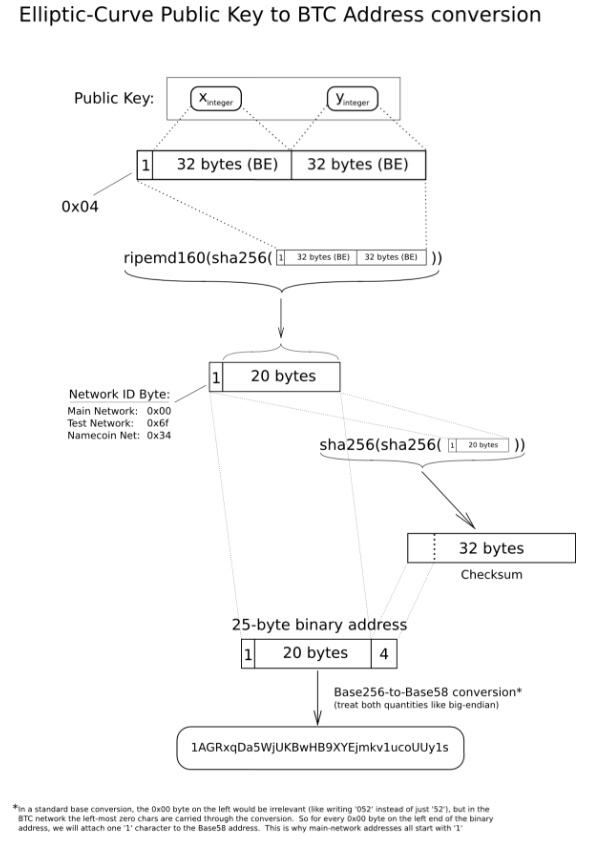 An explanation how you get an elliptic curve public key from a private key is more complex and would be too broad for an answer here. Yet, there are other Q&As at our site handling that, so take a look around to learn more about that. Same goes for how ECDSA works. And how SHA-256 and RIPEMD-160 work, and why it's infeasible to reconstruct the input from their output, is also handled in multiple Q&As at this site.

is infeasible for the reasons described above.

Not the answer you're looking for? Browse other questions tagged hash public-key dsa cryptocurrency or ask your own question.

2
Sane implementations of Bitcoin cryptography routines w.r.t. side-channel attacks
4
Using hash for one time pad key
9
Simple digital signature example that one could compute without a computer?
9
How to deal with collisions in Bitcoin addresses?
2
ECDSA pubkey recovery issue
9
Is there a guarantee that for each possible hash y there exists a number x such that with hash function H, H(x) = y?
2
Limiting how many key pairs someone can generate without compromising their keys
14
Is it safe to reuse a ECDSA nonce for two signatures if the public keys are different?