Can a ciphertext be decrypted to 2 meaningful messages?

Is it possible to achieve this?

Edit: Im asking for standard ciphers used in practice, not for theorical ones.

This is actually possible in practice because to us, human beings, a "meaningful message" can be a file.

Now, depending how we encrypt our files, we have more or less slack variables at hand to play around with the resulting ciphertexts.

Ange Albertini played a lot with file formats and he actually has a PoC where he encrypts given images into other files, even valid images... Or where he encrypts a JPG into a PNG if using AES and into a PDF if using 3DES... Or even worse! 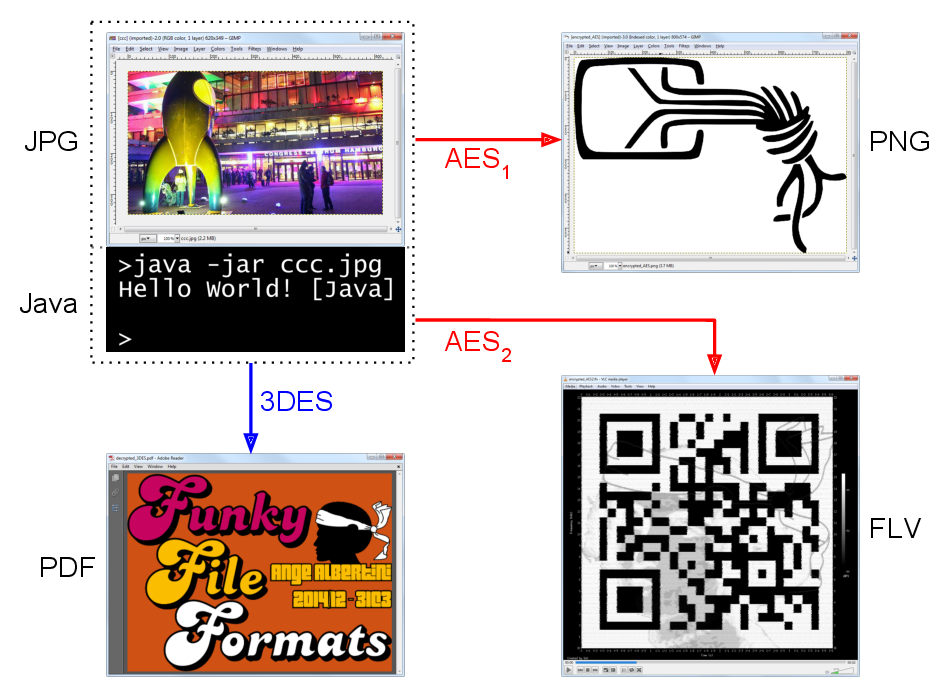 How comes? Well, this is mostly done by abusing the way the modes of operation work, as well as the way the file formats work.

With this two details you already have plenty of room to play around with the file formats in a way that would produce valid files when encrypted/decrypted!

Now, a question that was not addressed by Ange is whether this is secure... Well, as long as you are appending encrypted data or that you are not reusing your IVs, this does actually protects the content of your files (especially Ange's limited deniability example), as long as your secret key remain secret... (But it might be a problem in the case of CBC, depending on your use of the cipher, as it mandates most of the time the IVs to be unpredictable, unlike CTR where it suffices to have unique nonces.)

So, is it possible to do the same in the other direction, decrypting into two different files given different keys? Well, if you can have different IVs, then yes, it is possible using the same kind of tricks that Ange used.

In the end, is this related to the way the actual ciphers work? No, not at all. This is not a cryptographic property, but a consequence of the file formats' malleability.

Since a symmetric encryption is a reversible permutation determined by the key it is always possible to decrypt an encrypted message with another key. Whether the result is meaningful or not depends on the type of message one is using. If we are talking about English texts the answer is that it is rather unlikely. For binary messages the likelihood is higher. It depends on what proportion of possible bit combinations are meaningful messages.

3
Distinguish messages
1
Paillier Encryption: problems with double encryption
1
Determining if a ciphertext can be decrypted
0
Looking for a specific cryptosystem (encryption two times with two different keys and then decryption with another different key )
3
How can I get the message which was encrypted before (when decrypting a product cipher) ?
4
Create a ciphertext that decrypt to different plaintexts with different keys in RSA
1
Text cipher option that can decrypt the same ciphertext to two DIFFERENT and DESIRED outputs given DIFFERENT keys (and/or alphabet)
0
Is there an algorithm that gives a reasonable chance of decoding the entire ciphertext of this encryption scheme?