I was reading the paper $[1]$ and came across the scheme that I show below. While I understand the scheme well, I don't understand why they prepend a 0 to the block containing $r$ and a 1 to all other blocks. What is achieved by this? They never explain why they do it. Here is the scheme as presented in the paper: 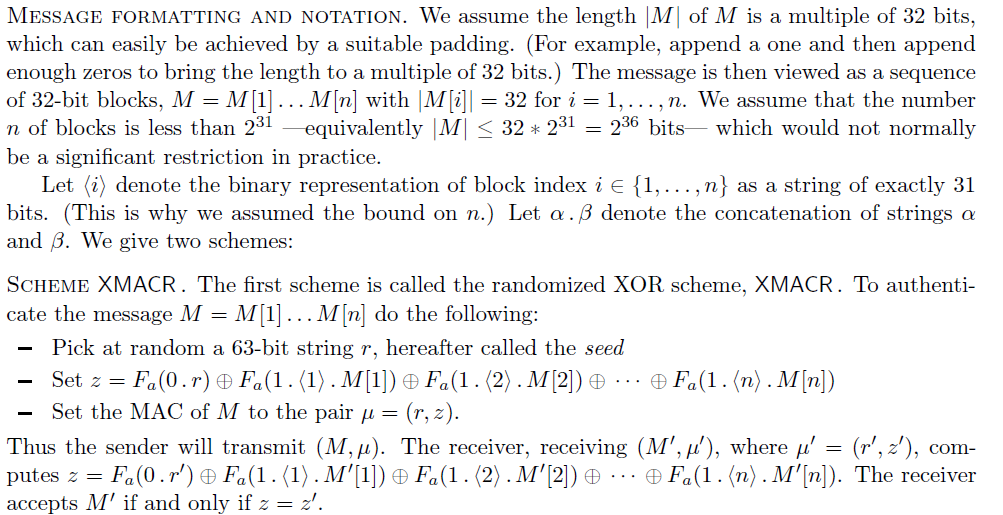 The short answer is: They prepend bits in that way because the scheme is not secure without them. While they might not explain it in English, their proof makes it clear where they use it.

The intuition is that prepending the bits prevents this sort of thing from happening. Specifically, this adversary found a way to force the verification algorithm to treat a previously used $r$ as a message, which can't happen with their domain separation strategy.

If that protection wasn't there you could use an attacker supplied $r$ to cancel out blocks and then with a pair $(r,F_a(r))$ you could forge tags. I haven't figured out how you could get that pair but it may be that the designers thought it would be giving too much freedom to the attacker.

It's a way of padding, so that the final chunk of data is always a multiple of the block size.

The reason why the pattern is 1 bit followed by 0 bits is to be able to find out exactly where the actual message ends and where the padding begins after you decrypt it: The message ends exactly before the first '1' bit when starting from the end of the message and going backwards. This padding method is frequently referred to as "ISO padding" (since it's described in ISO/IEC 9797-1 as padding method 2).

There are other ways to pad things, but this is relatively easy to implement and understand and that makes it frequently used. For more on padding check out http://en.wikipedia.org/wiki/Padding_(cryptography)

So now to explain: The reason is that they want the "string" they pass into Fa to be 64-bits long; r is exactly 63-bits by choice; M[i] is 32 bits, and i is at most 31 bits (also by definition), making their concatenation also 63 bits. So they need to pad with something to ensure that it's always 64-bits long.

As to why they do a 0 for the first block r and 1 for everything else (instead of say 1 and 0), after a very cursory reading of their paper I don't see any particular reason; it seems like an arbitrary choice. This doesn't mean that the padding itself is arbitrary. It serves a very important purpose, which they describe in their paper and it needs to be distinguishable from every other possible block.

Not the answer you're looking for? Browse other questions tagged authentication mac or ask your own question.