How were one-time pads and keys historically generated?

In the 20th century, it was common for various intelligence agencies and military organizations to use ciphering machines and one-time pads.

However, no source I've seen ever mentions the process of generating the keys and printouts for such use.

Your interesting questions deserve to be answered more thoroughly, but here goes:

The German additive generator of wheels and switches had weaknesses that were brilliantly exploited by American analysts: the phases, cycles, potential overlaps, and limits of the keys became apparent after an exhaustive analysis of captured GEE one-time pads. By March 1, 1945, the U.S. was breaking GEE traffic because the German machine did not create truly random numbers--the Americans soon made a mirror machine based on key periodicity, other weaknesses, etc.

The released document (PDF) says that the GEE keys

…could be predicted in full upon partial recovery through cribs and superimposition to give a new kind of overlap.

Breaking GEE allowed the U.S. access into German diplomatic traffic at the end of the war, especially their dealings with Japan. (See the intriguing reference to uranium in one pre-August 6, 1945 transmission.)

Interestingly, the document says that the Germans could have easily defeated cryptanalysis by changing the set-up of the 240 wheels in the machine, but they never did! The Germans produced enormous amounts of key material without altering the basic set-up of the device. This led to "ample homogeneous material" being created.

I think in the early days, WW1ish time, they were made by ladies randomly typing at typewriters. If a pad's page only contains 250 numbers, that can be fairly easily be bashed out on a manual keyboard. If different individuals produce different pages, that should even out unconscious patterns. I've read this somewhere but can't find a reference. But if you try it yourself, you'll see it's easy. And how can you disprove the randomness of 250 characters that were typed randomly on purpose? You can't as historical archives show.

Later they had electro-mechanical randomising devices relying on timing a switch's contact bounce which is fairly random, and produced numbers at 35 bits/s. The following is an extract:- 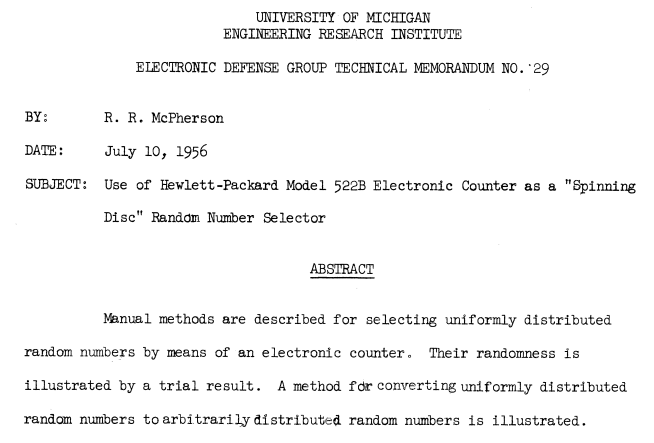 and the following is the Hewlett-Packard 522B counter instrument. You can see the random numbers on the neon display:- 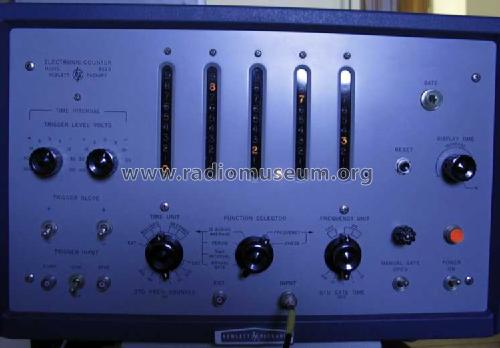 Later during the SIGSALY days, vacuum tube diodes were used to create electrical noise which was digitised. The key material was then distributed on a phonographic record. Users could talk for 12 minutes per record.

And whist the British Post Office is not the NSA, there's ERNIE which is a Premium Bond picker-outer machine. He's moved on now to solid state diodes photon counting, but ERNIE 1 (1956) did it with these valves:-

V1 (extreme left) is the noisy valve. Interestingly, we still use the same circuit today. We just swap the vacuum tubes for transistors.

I'm not aware of any security breaches of a OPT other than the breaking of the GEE German Diplomatic code during WW2. All of the documented instances like (Venona) relied upon duplicated key material, not poor entropy from the typist. The proof of this is that no OTPs prior to the pad duplication mistake in 1942 have been decrypted.

Not the answer you're looking for? Browse other questions tagged one-time-pad classical-cipher history or ask your own question.

33
Why do some people believe that humans are "bad at" generating random numbers/characters like this?
3
Household sources of secure randomness?
4
How was the 5 digit random number in the VIC cipher generated?

4
How are one-time pads distributed?
3
One Time Pads and reuse of the decrypted message?
10
Historic Authentication Schemes Before Computers
1
Clarification of Proof: Proving perfect secrecy for One Time Pads
17
Are one-time pads crackable in theory?
7
One Time Pads and "Bit Flip" Attacks
3
Are one time pads still secure when using randomly generated words as the pad?
18
Crypto AG (Switzerland) - Which algorithms were used and how did the backdoors work?