at rest encrypton question from someone who knows nothing

this forum is way above me and the members here are far, far smarter than I am, so this probaby isn't the place to ask such a simple question, but whatever.

All I wanted to ask is for at rest encryption, like something on your cloud account, I like to encrypt my files. I either use Serpent 256 or AES 256. The program I use is SSE File Encryptor.

As long as you have a very good password, your files should be secure right? And is there a program I should be using rather than SSE File Encryptor? (It's free, hence me using it)

Thanks and I apologize for such a lame question.

I don't really know anything about this particular program. The problem is

is really under specified. Which mode of operation? Where does the IV/Nonce come from? How do they authenticate the ciphertexts? These are all important questions.

To find out we might try to look at their "specifications". The problem is: They do not answer all of those questions and the answers we get do not inspire a lot of confidence. 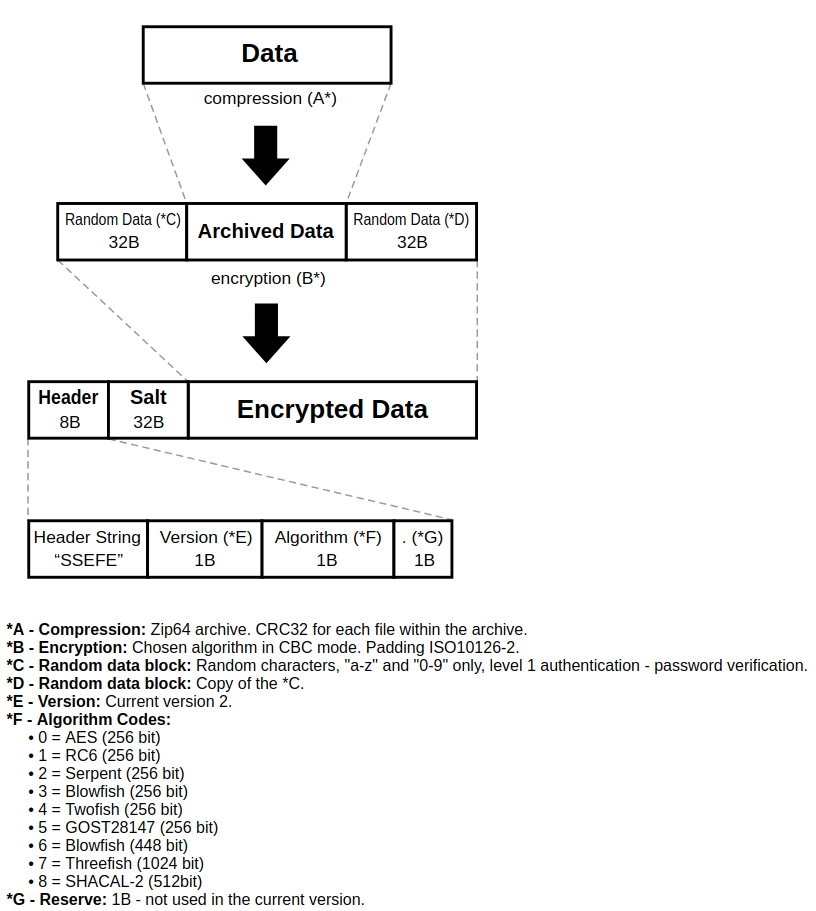 It starts with the fact that the first step is compression of the data. At least from a theoretical standpoint, that's a big nono. Unless the files are repadded to a fixed length after compression (which would make it pointless) compressing the plaintext before encryption breaks any indististinguishability-based security notion for encryption, such as CPA or CCA security. This is because the size of the resulting ciphertext now leaks information about the file's content rather than just about the size.

It then adds unexplained 32 byte blocks before and after the plaintext before encrypting. This is rather weird, however together with the specification that they use CBC mode, a non-authenticated mode of operation, and do not specify the existence of a MAC anywhere leads me to the conclusion that they were trying to construct some kind of homebrew ad-hoc authentication mechanism. Probably comparing the decrypted first and last block after decryption. This does not offer any kind of real authentication. You can easily change parts of a CBC ciphertext without affecting the first and last block. (I'm sure they're going to argue that everything is fine because decompression might fail if I blindly change parts of the file. In general that's bollocks and there is no formal argument to support this! This means that the ciphertexts are most likely not authenticated at all which means files in storage can be modified without you noticing when you decrypt.

Finally, they do not specify where the IV for the CBC-mode comes from. However this is crucial information, since the IV for CBC mode needs to be unpredictable, otherwise CBC-mode is completely broken. The fact that they do not realize that this would be an important part of the specification does not bode well.

Not the answer you're looking for? Browse other questions tagged encryption aes implementation serpent or ask your own question.

34
Why is CBC with predictable IV considered insecure against chosen-plaintext attack?
26
Why should I use Authenticated Encryption instead of just encryption?
6
How does compression before encryption leak info about the input?

9
Will varying plaintext compensate for a fixed initialisation vector?
1
Best practices (if any) to add metadata to encrypted files
2
What is required to decrypt an encrypted file?
3
Are all encryption tools made equal?
0
Encrypt UDP packet with time-generated encryption key
0
Encrypt a big file in blocks with AES-GCM: how many nonce do we need?