I read this wiki article and saw this formula for random password's information entropy. Also the wiki article mention that the symbol count for non case sensitive is 36. Is there a way I can calculate the password space with this information. 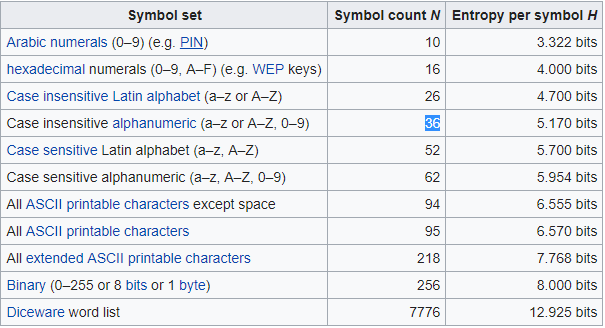 To translate that to the password space - the number of possible passwords - you simply can perform $2^{48}$ which means that there are 281,474,976,710,656 possible passwords. A little known trick to get an idea of the number of decimal digits is to multiply by 3 and then divide by 10 and round up: so $\large\lceil\normalsize{48 * 3 \over {10}}\large\rceil\normalsize = 15$, i.e. above number contains 15 digits. A more direct method is to simply perform exponentiation with the password size: $8^{16}$ will give you the same large number. However, I use the trick above to perform such calculations without calculator.

Note that protection against brute force should require key stretching by e.g. using a password hash. For such kind of passwords additional protection (such as account locking) should be implemented. The system needs to deal with low entropy passwords.

It's tempting to use the H log formula that you've included at the bottom of your question. That only applies to independently and identically distributed (IID) characters. That's what a key derivation function provides, and which you such probably be considering. A human password is like "SECRET" and "JamesBond1" as I use. Those characters are not remotely IID.

Some numbers to create a context:-

But a password is not a key. The Second Edition of the 20-volume Oxford English Dictionary contains full entries for 171,476 words in current use, and 47,156 obsolete words. That's around 220,000 words. Even if we chose say a single word randomly, that's only ~18 bits. Combinations or words may increase this, but the fact that some of those are much longer than eight characters also reduces this. 18 bits = 262,144 and is only $ \approx \frac{1}{1,000,000} $ of the size an equivalent length IID key space would be. See, it's getting hard.

Shakespeare wrote at about 1.7 bits /character, so his eight character laptop password would have only been 13.4 bits, giving a potential space of ~11,000. That's $ \approx \frac{1}{20,000,000}$ of IID space. This estimate is almost rubbish, but who can do better and it highlights the hard issue.

Passwords are generally made of words that we know. Those words follow strict rules (if you can spell). And randomly chosen letters tend to be towards the centre of the keyboard. Humans are very bad at generating randomness, which is why we no longer simply use typists to create one time pads. The most scientific estimates we have are detailed in NIST Special Publication 800-63, Electronic Authentication Guideline, Appendix A. Quoting:-

Adding up, you'd have an eight character password entropy of 18 bits, and a space of 262,144. Surprisingly identical to my own cockamamie estimate. That publication is obsolete now, and the current version doesn't feature any form of entropy assessment.

There is also NIST 800-90B Recommendation for the Entropy Sources Used for Random Bit Generation. There are formulae there that attempt to calculate the entropy of random non IID sequences, but are unsuitable for strings as short as eight characters. And there is strong evidence from How to interpret the entropy results for a NIST test file? and NIST 800-90B /Non-IID track - min-entropy result > 8 for 8-bit symbol that the formulae are unsound.

Without having to read between the lines, NIST says it's hard too:

Not the answer you're looking for? Browse other questions tagged encryption keys passwords key-size password-hashing or ask your own question.

6
Is my password entropy calculation correct?
3
How to calculate entropy of a combined key
1
Protecting a short password
4
gpg --gen-random quality level: is higher “better”?
2
How secure is Shamir's Secret Sharing for password sharing when attacker has t-1 shares?
3
Does AugPake not require key stretching?
1
storing salt in app
1
Encrypt a file in a way that decryption requires every recipient's cooperation
0
How to calculate the entropy for a fixed length random passwords which has restrictions on the type of characters used