Can a Feistel network have more than two halves, widening the block width?

Just to help form this question, this is a Feistel network:- 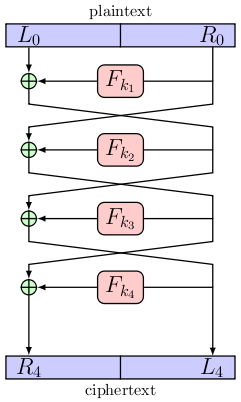 Why does the generic architecture have to have two halves? We already have asymmetry in some variants. As I understand it, the principal security comes from a secure permutation within the round function. All that happens outside of the round function is simple xor and swapping halves.

Could it have more than two halves then? Say five like the bread? Or perhaps it has to be an even number of plaits /halves, so say four? Or ten? Yes it would mean more rounds to ensure good mixing of halves and be secure, but that's doable. So for example, with six halves of 64 bits each, would you have a 384 bit cipher? Is there some intrinsic reason why this wouldn't work?

There are designs called generalised unbalanced feistel networks which do exactly this.

See the paper by Schneier and Kelsey here. The CAST cipher, an AES competition entry was an early example.

The article on cryptowiki gives a brief summary here

Here is an example: 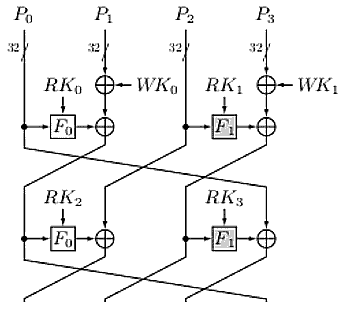