I am looking at Wikepedia Galois Counter Mode article. I see this diagram 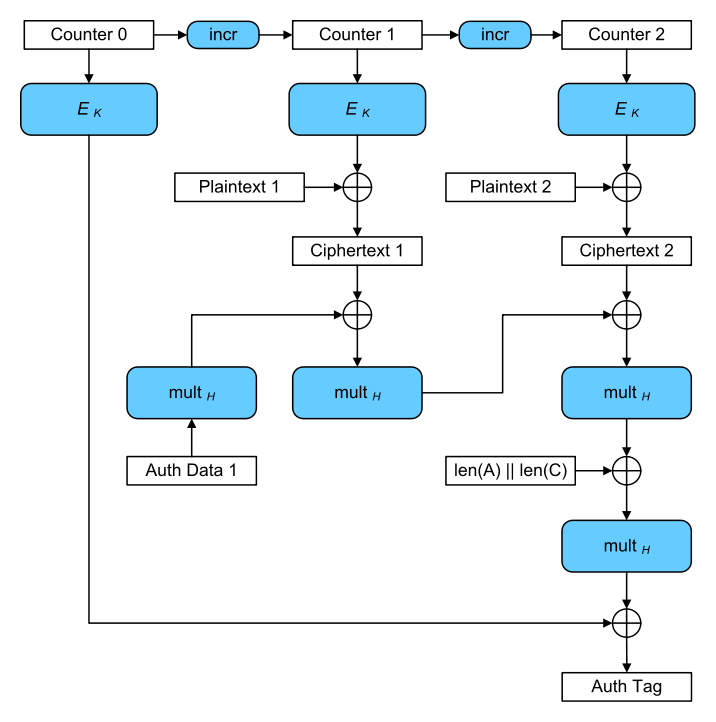 I am trying to figure out where the IV works its way in. Is it used to initialize the counter? If so, how does a sequence of 12 bytes (96 bits)initialize a counter on a 32 bit machine?

The diagram shows the gist of the algorithm, but not everything in it.

The bulk of the encryption in GCM uses AES in CTR mode. "CTR mode" means that "successive" values of a counter are encrypted with the block function (the AES properly said) in order to yield a key-dependent pseudorandom stream which is combined (bitwise XOR) with the data to encrypt or decrypt. Each counter value thus has the size of a full block, which is 128 bits. Note that there is no requirement for the notion of "successive values" to match any given arithmetic model, in order to achieve security; we only need that the "successive values" are distinct. Of course, for encryption and decryption to work, sender and recipient must agree on the initial value and how to "increment" it in order to obtain the successive values, and that is defined in GCM.

The specification for GCM is NIST SP800-38D. In that document, we see the following:

In GCM, the AES block function is used for exactly three things:

The details of GCM have been made such that, if the IV has length exactly 12 bytes, then all these values are guaranteed to be distinct to each other; the security of GCM depends on it. An important consequence is that if you use the AES/GCM key for anything else, then all security guarantees evaporate like dew in the morning sun.

It shall be noted that the use of the last four bytes as wrapping counter is not a universal convention. That is, it is defined that way in GCM and all GCM implementation follow it (otherwise they would not interoperate). However, other schemes that use CTR mode may have different conventions. In EAX and CCM, the full 16-byte block is considered to be the encoding of a complete 128-bit integer.

Computers are not limited to what can fit in a register, in exactly the same way that you have only ten fingers, but can still perform operations on numbers that contain several digits. On a 32-bit computer, you would use four 32-bit registers to hold the complete 128-bit value. See for instance how it is done in BearSSL implementation; the gist of the increment operation is as follows:

The four 32-bit words are cc0, cc1, cc2 and cc3 (of type uint32_t, i.e. exactly 32 bits each). These weird expressions compute the carry propagation with branchless, constant-time code; a simpler (but not constant-time) implementation would look like this:

However, usually the IV is 96 bits / 12 bytes, so in that case the initial counter value $J_0$ is simply the IV, followed by 3 bytes valued zero and a byte valued 1, but increased with 1 for the CTR mode encryption (so make that last byte a byte valued 2).

The initial counter before it is increased is used to encrypt the output of the $\operatorname{GHASH}$ value to calculate the authentication tag as you can see in the picture.

So it's kind of tricky as the initial counter value (Counter 0) in that picture is FFFFFFFFFFFFFFFFFFFFFFFF00000001 instead of all-zero if the IV is, for instance all bytes with value 0xFF. Sometimes a key check value is used for a key which consists of the encryption of an all zero block of bytes, so it is kind of beneficial to security if it is defined this way, starting at 1 instead of 0. Otherwise an IV set to all zero bytes may leak part of the $\operatorname{GHASH}$ value.

Security warning: because of above only $2^{32} - 2$ blocks should be encrypted for a given key. Furthermore it is highly recommended to use a 12 byte IV, security issues have been found if the length of the IV is anything other than 96 bits.

Not the answer you're looking for? Browse other questions tagged gcm aes-gcm or ask your own question.

37
Ciphertext and tag size and IV transmission with AES in GCM mode
6
Is this a typo/error in the Galois/Counter mode specification or have I misunderstood?
1
GCM cipher M0 tables : semantic questions on how to implement GCM
1
how does AES GCM in SSH work?
4
How to handle the extra 12451 elements in Sophie-Germain Counter Mode?
4
What are the actual merits of Galois/Counter Mode?
0
Authentication in Lattice PQC candidates
0
How to produce Auth Data and tag in GCM? Does MAC appended CTR mode encrypted text weaker than GCM?