Why don't block ciphers consist of a simple XOR operation with key like Stream ciphers?

For stream ciphers, this is fine, since the keystream can be made arbitrarily long. (Of course, the keystream generator itself must involve something more than just XOR.) But in a block cipher, we want to be able to encrypt many blocks with the same (relatively short) key. If the encryption process consisted of just XORing the key with the block, this would become insecure as soon as we tried to encrypt more than one block with the same key.

Of course, we could consider having some kind of a key expansion process that generated an endless stream of "block keys" from a single master key, and then just XORing each block of data with a different block key. But this would really just be a stream cipher operating on blocks of data, not a block cipher.

A stream cipher consists of more than just a single XOR operation. They first have to spend time generating the key stream from the key and nonce/seed. They actually use many of the same operations and take about the same amount of time as a block cipher does to do so.

For example, Salsa20 is a stream cipher that uses addition, rotation, and XOR to generate the key stream. 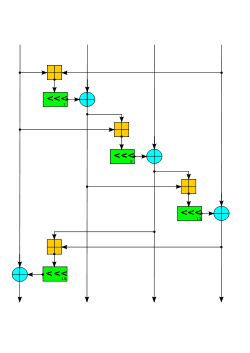 After the key stream is generated, it is combined with the message via XOR.

The stream cipher is only secure if the key stream is unpredictable. The complexity and time goes into making the output unpredictable.

Is a construction of a block cipher defined as just Xor-ing a block of bytes with a block of key bytes (removing all permutations and other operations) not secure?

Unless your messages are the output of a random number generator and have 8-bits per byte of entropy, then they are susceptible to a known plaintext attack. Any meaningful message will not have 8-bits/byte of entropy, and so you have to assume that the adversary already knows the plaintext messages when designing a cipher.

Additionally, assume that you have two messages $m_1$ and $m_2$ that differ by only a single bit. When you XOR the key into them, the only difference in the resultant ciphertexts is at the place where the messages differed by one bit. A block cipher should produce a random permutation of message blocks, and this is clearly non-random behavior. A block cipher needs to spend time creating diffusion, where flipping a single input bit flips approximately half of the output bits.

Because stream and block ciphers are not in fact comparable types of object. They're practical approximations to two different types of ideal object:

$2^n!$ is a vastly larger number than $2^n$. It follows that the probability that a randomly selected $n$-bit permutation will have the same effect on its inputs as the application of any of the $2^n$ one-time pads of length $n$ is therefore very unlikely. And this means you can't build a reasonable block cipher by using the OTP strategy of XORing to the input; XORing with an OTP only allows you to permute inputs in $2^n$ different ways.

One piece of practical advice: in spite of many introductory cryptography materials' description of block ciphers as "encrypting messages one block at a time," try not to think of block ciphers as message encryption algorithms at all. Think of them more as a basic building block that tries to behave in a very specific, well-defined manner, which cryptographers then reuse to build practical encryption algorithms out of.

Not the answer you're looking for? Browse other questions tagged block-cipher algorithm-design stream-cipher or ask your own question.