How to evaluate chi squared result?

I've been recently working on a (supposedly) TRNG. I'm still at the beginning of the project, so it is certainly not cryptographically secure yet, for now I'm just playing around. In fact, I've already discussed the project and the chi square results here in question: Random number generator issue.

At this early stage I'm using ent to see if there is any gross issue, later I'll move to a more accurate test suite.

One of the ent measured parameters draw my attention: the chi-squared. After doing some research I've understood that this value basically says how much, in a set of values, their frequencies match with the theoretical expected frequency. $$\chi^2=\sum_{i=1}^n\frac{(o_i-e_i)^2}{e_i}$$ where $o_i$ is the actual frequency and $e_i$ is the theoretical frequency.

And that's fine, but how do I understand which would be my optimal value? For my particular case (values ranging from 0 to 255, uniform distribution) I'm using 254.3 as a reference "optimal value" from ent's manual. (I could be wrong on this, ent manual explicitly states only that for true randomness i should expect my percentage value to be between 10 and 90%, which is centered to 50%, which gives a value of 254.3)

Let's say everything is perfect, I'd have $o_i$ which is equal to $e_i$, so the difference would be 0 for every $i$, they should add up to 0 and my optimal chi-squared would be 0.

But according to ent my optimal chi-squared is the above mentioned 254.3.

Testing the frequency of bytes produced by an ideal (uniform) random generator per question's method with $1200$ samples or more gives a $\chi^2$ that varies typically by few dozens around the average, $255$. It should be below $254.334$ for 50% of experiments, and the most likely values those closest to $253$.

For a good uniform random sequence of bytes, and "enough" samples, the distribution of $\chi^2$ computed as in the question has a well-studied distribution: the $\chi^2$ distribution with $2^8-1=255$ degrees of freedom, with this Probability Density Function: 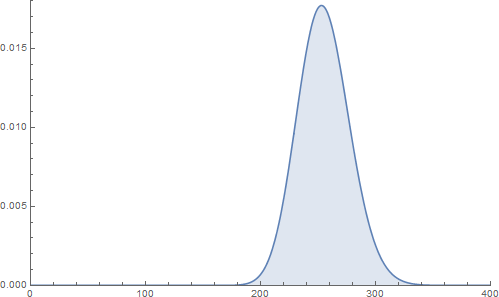 The standard deviation is $\sigma=\sqrt{510}\approx22.58$. Because the PDF is close to a normal, the 68–95–99.7 rule applies: that gives the probability (in percent) to be one, two and three $\sigma$ from the mean. Again that's with "enough" samples. A rule of thumb tells that about $5$ samples per expected value (thus like $1200$ samples) starts to be enough when reasoning at up to $2\sigma$. More sample usually help (I wish I knew how to more rigorously choose the minimum number of samples). 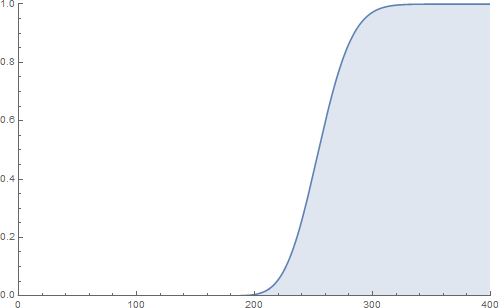 That tells the expected proportion of experiments (for a uniform random sequence) where the computed $\chi^2$ is less than a certain value.

In particular, a generator that consistently gives low $\chi^2$ is not random!

When we generalize to different tests with a random variable taking one out of $n\ge2$ different outcomes with expected frequencies $e_i$ and $\displaystyle1=\sum e_i$, and the number of samples is at least about $5/\min(e_i)$ (enough for a minimum of $5$ expected samples for each value), then the distribution of $\chi^2$ is the $\chi^2$ distribution with $k=n-1$ degree(s) of liberty.

The shape of the Probability Density Function vary with $k$. 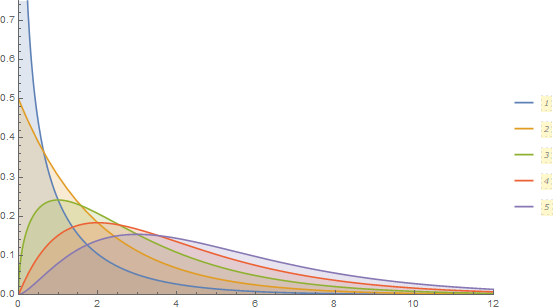 The shape of the Cumulative Density Function vary with $k$: 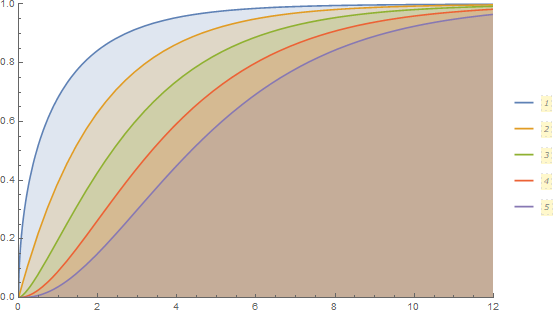 This is a standard technique taught to children early in their initiation into the satanic rituals of Dungeons and Dragons.

This is an instance of a slightly more advanced technique called rejection sampling. It is a popular technique among teenagers seeking mates under 20, and while it is not guaranteed to complete in finite time, the average number of trials this instance takes to complete is less than two, and the probability of success after $n$ trials is exponential in $n$, though in cases of high rejection rates it occasionally does lead some of the teenagers away from normal society into the aforementioned satanic rituals.

This last procedure may appear to be a bit of a head-scratcher. But I assure you that these all have the same distribution—in the frequentist sense that the expected fraction of each outcome in an iterated experiment is always 1/20, and in the Bayesian sense that from the information I have given you about how I produce a single outcome, your state of knowledge weighs each option with equal probability 1/20.

Now consider a variant of the third procedure, where instead of flipping a coin, we do:

This is not a procedure to sample an integer in {1, 2, 3, ..., 20} uniformly at random—it is strongly biased toward giving 20. (Try it! Unless your name is Raphael Weldon, however, I suggest you write a computer program to simulate it.)

Note that steps C3/C4 are the same as steps D3/D4. These steps are part of what is called a $\chi^2$ test. We can use this to try distinguish a black box containing uniform gremlins who perform steps C1 and C2, reporting 0 for each heads and 1 for each tails, from a black box containing biased gremlins who perform steps D1 and D2, reporting 0 for each 6 and 1 for each non-6, as follows:

How do we assess how well this test distinguishes the two hypothesis of uniform vs. biased gremlins? We compute or estimate:

A traditional statistidigitator might prestidigitate this in statistics jargon as follows:

We are trying to find whether the gremlins seem to be biased. If they are, we will report an effect and get a publication for our CV in the highest-impact journal whose editors don't look too closely at our ideas about gremlins.

Suppose you write this $\chi^2$ test down as a computer program, and run it on a black box containing not gremlins flipping coins but rather your TRNG hardware. How do you interpret the outcome of the test?

An orthodox frequentist analyst would just use this test as a criterion for accepting or rejecting papers in their journal, so that they don't get criticized for more than a 5% rate of spurious alarms raised about biased gremlins in the population, until a replication crisis arises in your field owing to the devious phenomenon of unwitting $p$-value hackers in the garden of forking paths. An orthodox Bayesian analyst might further ask you to quantify in your prior state of knowledge the probabilities that your TRNG hardware behaves like uniform or biased gremlins, and will tell you what probabilities those options should have in your posterior state of knowledge.

None of this can tell you that your TRNG hardware is uniform. Critically, all we can do is apply tests that probably distinguish different models for how the box works. As the saying goes, all models are wrong, but some models are useful. In this case, the model of gremlins is wrong because, despite what your mother may have told you to make you clean your room, gremlins don't actually exist.

Exercise. Consider the box of flip-flopping gremlins that do the following:

Conclusion. So what do you do?

First, there's no ‘optimal $\chi^2$ value’. There's a distribution of test statistics, like $\chi^2$, from tests like the above procedure. There's decisions you can make based on the outcomes of the test, which have distributions of consequences in each model of the world, some of which are better than others. If you design your test so that it reports biased gremlins with 99% probability when you are given uniform gremlins, your test is not really very useful.

Second, the $\chi^2$ test doesn't mean much here. In a sense it is about the dumbest test you can perform, because it ignores relevant information. For a physical TRNG, you should study the physics of the device as much as you can, and formulate hypotheses not about biased gremlins playing Dungeons and Dragons but about plausible defects in the design and manufacture of your physical TRNG. (Can it ever get stuck in an alternating state? Will a $\chi^2$ test detect that?) For a PRNG with a uniform random key, you should at the very least figure the PRNG algorithm itself into your test!

Finally, there is no finally. The world is a complex place. There's always more to understand about it, and new models that can change your way of thinking. This may be one of them, even if I haven't quantified any prior probabilities or likelihoods about it!

Unfortunately, randomness is never optimal. It wouldn't be random then.

You don't normally consider the chi value itself. You transform it to a probability p based on the chi distribution and the number of degrees of freedom (255 in a byte's case). The p is then expected to be uniformly distributed between 0 and 1. Herein lies the problem. So one value doesn't really mean anything. A p of 0.01 is perfectly acceptable with a single run. If it's 0.01 over many runs, then your data isn't as expected. You should get all sorts of values up to 1. It's common then to perform a Kolmogorov–Smirnov (KS) test on the ps. You can use R, Python or code it yourself. I use Java's commons.math.

A note. If your chi = 0, your generator is broken as you never ever get a uniform distribution of bytes. Never. Interestingly, the chi for 2.5 billion decimal $ \pi $ digits is 12 which gives a p of ~0.2. Similarly, there is no such thing as an optimal chi value for IID bytes. That would be too easy. But also consider that it would be too easy for an attacker too if they knew exactly the distribution of bytes in a cipher. So what makes it hard for you to confirm randomness, is exactly the same thing that keeps a cipher secure. That's why they say that you can't mathematically prove randomness. You have to use the "duck" test.

The best way to visualise randomness is with the following random walk over 22 trillion $ \pi $ digits. Consider what the bias and chi values might be for the contents of the two boxes. They'd be wildly different, but both are perfectly correct as $ \pi $ is perfectly random. Your 254.3 value simple means that, meh, it's exactly 50/50 that your particular sequence is random. One value like that has little statistical significance. 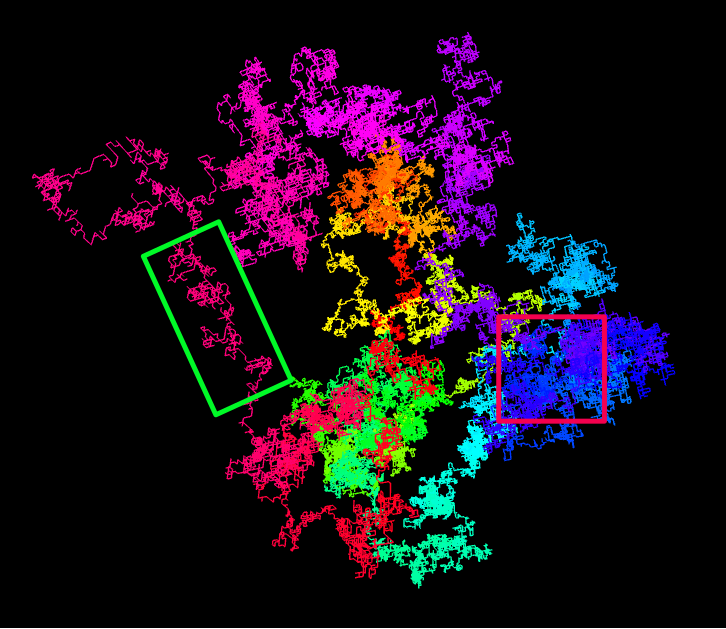 Normal distributions or those based on a larger range are exactly the same method, with different numbers of degrees of freedom, but. Have a look here. But of course a TRNG doesn't output different distributions natively. All randomness extraction techniques output uniformly distributed bytes. And you can't have a normal distribution for discrete data like quantisized RNG bytes anyway. That would be a Binomial distribution with p $ \neq $ 0.5.

7
Random number generator issue
3
Verifying randomness and uniqueness of TRNG output
2
Why should one model an entropy source in order to build a TRNG?
2
Randomness measure of a sequence over a finite set

2
Random Number Generator based on AES CTR
3
What's causing the poor randomness in this program: the LCG, or the program logic itself?
4
How do you interpret the p-values from the Dieharder testsuite to evaluate an RNG?
4
What problems with "random" data would cause this result from Ent?
7
Diode vs quantum computer
0
RSA-KEM: minimal number of random bits
4
What is proper use of a True Random Number Generator?
1
Origin of the Chi-Squared test statistic for serial test (two bit test)
1
Any famous approach for analyzing the randomness of data?