How to interpret the entropy results for a NIST test file?

There is test data derived from pi that is supplied by NIST for validating their entropy measurement formulae listed in NIST's Recommendation for the Entropy Sources Used for Random Bit Generation. The data is of the following hex format (one varying bit per byte):-

Simple deduction implies that the true entropy of such a pi file is ~1 bit/byte. Neither NIST measure was close. Why are these three measures wildly different?

and to determine whether this is actually an IID file instead:-

DIY compression tests with fp8.exe and paq8px_v112.exe create a ~143000 byte file (as expected from hypothesis that pi is random).

First: Entropy is a property of a random variable in a physical process or a state of knowledge with more than one possible outcome, not a property of a deterministic function or a fixed known value. If you treat a fixed known value as a random variable with a trivial probability distribution with only one possible outcome, then its entropy is precisely zero. In this sense, the entropy of the binary expansion of $\pi$ is zero: from that description anyone can guess them with 100% probability of success.

Similarly, IID, or independent and identically distributed, is a property of several random variables in a physical process or state of knowledge.

Now suppose you are presented with a black box that spits bits at you when you turn a crank on it. Here are two scenarios involving the black box:

Most of information theory and coding theory is dedicated to the study of Shannon entropy in scenario (1), because there's big money in compressing as many pixels onto discs and fiber optic links as possible to have big swooping action scenes in blockbuster movies, and because the physical world is full of black boxes like the electron orbits of hydrogen atoms that fat-fingered apes in Switzerland are only barely figuring out.

Most of cryptography is concerned with maximizing the min-entropy in scenario (2), and not with black boxes but with specific algorithms for mixing bits together. But there are centuries of mathematical tools built for scenario (1) which serve as a proxy for (2) because the Shannon entropy is an upper bound on the min-entropy.

Any putative ‘entropy testing’ tool really works like the following:*

Here are a few stochastic processes that the tools might be programmed to assume as models for how the black box works:

For each of these processes, there are various standard techniques for estimating parameters or posteriors, computing the entropy of the output, computing the conditional entropy of one output given another, etc.

Suppose you have an entropy estimation tool with the following single hypothesis family in its modeling assumptions:

The coin-flipping gremlin could generate the binary expansion of $\pi$, with probability decreasing exponentially in the number of coin tosses. When the coin-flipping gremlin makes fair coin flips with $p = 1/2$, its output has 1 bit of entropy per bit of output. One possible outcome of this gremlin is the binary expansion of $\pi$—but the ‘entropy of a fixed outcome’ (always exactly zero) is not the entropy of the process.

If you fed this tool a black box with a gremlin that always spits out the deterministic alternating sequence 0, 1, 0, 1, 0, 1, etc., it would always report exactly 1 bit of entropy per bit of output, even though this model of black box with a deterministic alternating gremlin inside—which is not in the hypothesis space of the tool—has zero entropy.

On the other hand, if the tool also considered the hidden Markov hypothesis

then for a box with the alternating gremlin, it would probably report an entropy near zero based on an empirical estimate of the transition probabilities.

If you fed this tool a black box with a gremlin that always spits out the binary expansion of $\pi$—also outside its modeling assumptions, and also zero entropy—it would report near 1 bit of entropy per bit of output because the ratio of one bits to zero bits in any finite truncation of the binary expansion of $\pi$ that anyone has examined is pretty close to 1:1, and the Markov model is not likely to help much either.

Most of these tools do not contain in their hypothesis spaces the zero-entropy deterministic process that is a gremlin dutifully computing the binary expansion of $\pi$. Physicists tend not to find gremlins like that when they peer at hydrogen atoms under magnifying glasses, so it's not really useful to include them in general-purpose tools. If you did include that modeling assumption, the tool could tell you that your sample matches the $\pi$-gremlin model exactly, $\Pr[X = \operatorname{trunc}_{1000}(\pi) \mathrel| \text{box yields binary expansion of $\pi$}] = 1$ where $X$ is the first 1000 bits of the black box.‡

Similarly, when applied to a sample that you know was produced by cryptography, such as $\operatorname{MD5}(0) \mathbin\Vert \operatorname{MD5}(1) \mathbin\Vert \cdots$, these tools are stupid in the precise sense that they don't know you used cryptography, so they exclude calculations involving MD5 from their possible hypothesis space, and if they had a next-bit guesser, it is unlikely to function like MD5 without being programmed explicitly to be so.

So what's the entropy of a black box containing a gremlin dutifully computing the binary expansion of $\pi$? Zero! Want to save costs on telegrams? Send your colleague a single telegram telling them this, and you don't have to send them a single extra bit; they can guess it for themselves.

* Advanced ones may even do Bayesian model selection to combine all the distribution families, but traditional statistidigitators of yestercentury tend to abhor a cohesive Bayesian view of the world and prefer littering your terminal with incomprehensible jargon and numbers for you to interpret yourself. In fact, many statistics tools don't even articulate their modeling assumptions but rather blindly use standardized tests developed by respectable statistidigitators, which nobody ever got fired for buying. In contrast, the Bayesian rebels of yestercentury persistently asked annoying questions about priors that you never know how to answer so they stopped getting invited back to dinner parties.

† Certain advanced Bayesians might choose $B(1/2,1/2)$, or live on the unsampleable edge of the improper $B(0,0)$. Even more advanced ones might choose $B(\alpha, \beta)$ with a hyperprior on $\alpha$ and $\beta$, and if taken to extremes, stand on the backs of hyperturtles all the way down, which they dryly call ‘hierarchical modeling’ instead of listening to my suggestion because they started avoiding me after I dropped too many turtles on their heads.

To put it simply, $\pi$ is not random, since it is a single object. Not only that, it is not even proved whether it is normal to even one base $b.$

Essentially a number is said to be simply normal to base $b$ if its base$-b$ expansion has each digit appearing with average frequency tending to $b^{-1}.$ Clearly no rational number can be normal.

A normal number is an irrational number for which any finite pattern of numbers occurs with the expected limiting frequency in the expansion in a given base. It is known that almost all real numbers are normal, but there are massive difficulties with exhibiting normal numbers, just like there were difficulties with designing codes achieving channel capacity though Shannon's proof of achievability dates back to 1949.

Going back to $\pi,$ experiments indicate that its digits are close to uniformly distibuted to all bases that have been checked, but this ignores second order dependence effects [which would have exponential complexity to check], and entropy of a random stream captures such properties, and presumably the tests have been designed to capture such effects, albeit with different assumptions for each test.

The tests do not work effectively on any real world correlated or non uniform entropy data. These are the findings of John Kelsey, Kerry A. McKay and Meltem Sönmez Turan, Predictive Models for Min-Entropy Estimation, and Joseph D. Hart, Yuta Terashima, Atsushi Uchida, Gerald B. Baumgartner, Thomas E. Murphy and Rajarshi Roy, Recommendations and illustrations for the evaluation of photonic random number generators. They produce the following summaries, showing the massive under estimations the tests produce:- 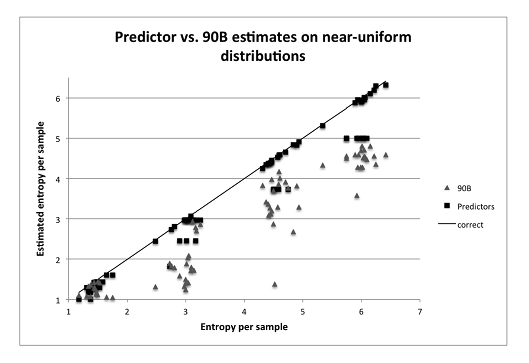 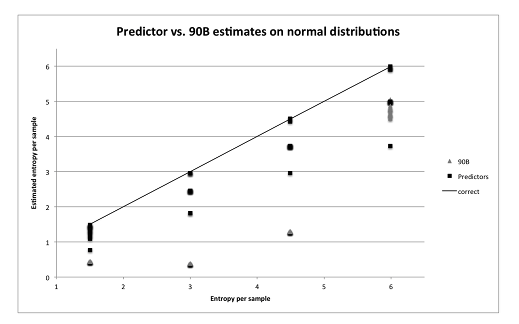 and from my own testing, a chart confirming a similar magnitude of errors:- 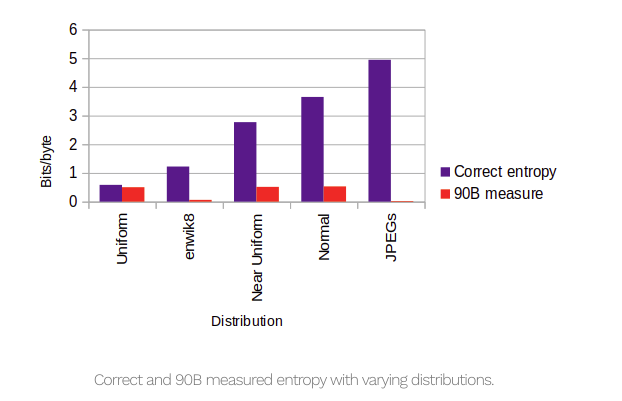 In short, the more the raw entropy deviates from IID (as is common in the real word), the greater the errors 90B produce. This climaxes in a 215 fold error for the entropy measure of a JPEG file. It is not surprising then that no one can find any examples of 90B being applied in the wild, as demonstrated in Any concrete examples of the use of NIST Special Publication 800-90B?

I'm excluding the Shuangyi Zhu, Yuan Ma, Tianyu Chen, Jingqiang Lin and Jiwu Jing Analysis and Improvement of Entropy Estimators in NIST SP 800-90B for Non-IID Entropy Sources paper as they use a Markov model for simulation data which seems inappropriate to a critique of said model. However, they effectively reach the same conclusions (just less so).

7
Differences between methods of hardware random number generators
6
Hardware RNG Bias
5
Noisiest RF band for random number generation
3
Verifying randomness and uniqueness of TRNG output
2
Why should one model an entropy source in order to build a TRNG?
6
NIST 800-90B /Non-IID track - min-entropy result > 8 for 8-bit symbol
0
Is a cryptographic key of size $N$ equivalent to $N$ bits of entropy?
1
How can Bob quickly generate thousands of letters randomly while strongly mitigating the risk of compromise?
2
NIST randomness test p values
2
How do I calculate a password space if the password only has eight alphabetic characters (not case sensitive)
See more linked questions