Solve System of Equations including XOR and Modular Addition 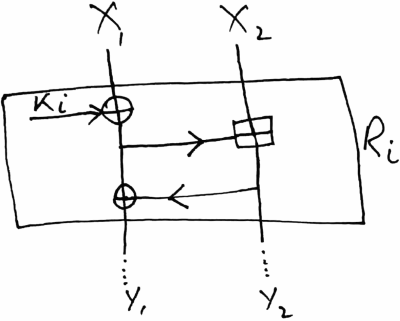 Ok, this would appear to be homework, so I won't give the full answer; I'll get you started.

First thing to do (with this attack approach) is to write out the full equations of the system, as in:

Now, this approach takes apart this two round cipher quite nicely; however it doesn't scale very well; adding a third round to this toy cipher will break the relations this depends on. On the other hand, I suppose it might be a start in learning how to think about how to attack a cipher, although you will need to find other ways to attack less trivial ciphers. fgrieu's suggestion about looking at the lower-order bits first is a more general approach that'll work in cases where this won't.

4
Solve a Modular Exponentiation
3
In what sense addition modulo $n$ ($n>2$) isn't linear in the field $\mathbb{F}_2$?
1
Mixing xor with modular addition
6
Mixing x into permutation through XOR vs. modular addition
3
Solving a system of equations using both arithmetic and bitwise operations
2
How to solve polynomial modular equation to create a correct decryption algorithm
1
Modular equation system
1
Modular Addition in RC5 is linear or not?