Does the double-hash H(H(x)) have greater collision probability than H(x)?

Well... we need a precise $P_c$ definition. Perhaps the problem here is also the choice of a good probability definition (see notes below).

Answer's application: the answer is important in the context of checksums used for digital preservation integrity of public files.

Imagine the checksum (the hash digest $H(x)$) of a PDF article of PubMed Central or arxiv.org... And that we need to ensure the integrity, with no "PDF atack" or minimizing it, in nowadays and in a far future, ~20 years.

If the answer is "YES there are a little increase", the recommendation will be "please don't use double-hashing as standard for checksum for PMC or arxivOrg".

The general collision probability is defined as

Given $k$ randomly generated $x$ values, where each $x$ is a non-negative integer less than $N$, what is the probability that at least two of them are equal?

If there are no error on my interpretations, I need other probability definition.

This kind of probability seems better to express the problem.

Another metric, instead a probability. Perhaps using Bloom filter theory as reference. A kind of efficiency-benchmark of two Bloom filters, one with $H$ other with $H\circ H$.

I'm not sure what the question here is, but obviously applying the hash function twice can never decrease the number/probability of collision as all collisions in the first invocation are maintained.

However if H is collision free( a permutation as opposed to a random function) doubling will not cause any more collision it will remain collision free. So we see the number of collision does not strictly increase.

For a PRF, the number of collision does clearly increase, this is one reason why when we iteratively hash passwords in for key derivation we mix in the input again every round and not simply hash calculate $H^n(salt || pass)$

If you look at the structure of a function you will see several cycles and threads(trees) leading into these cycles: 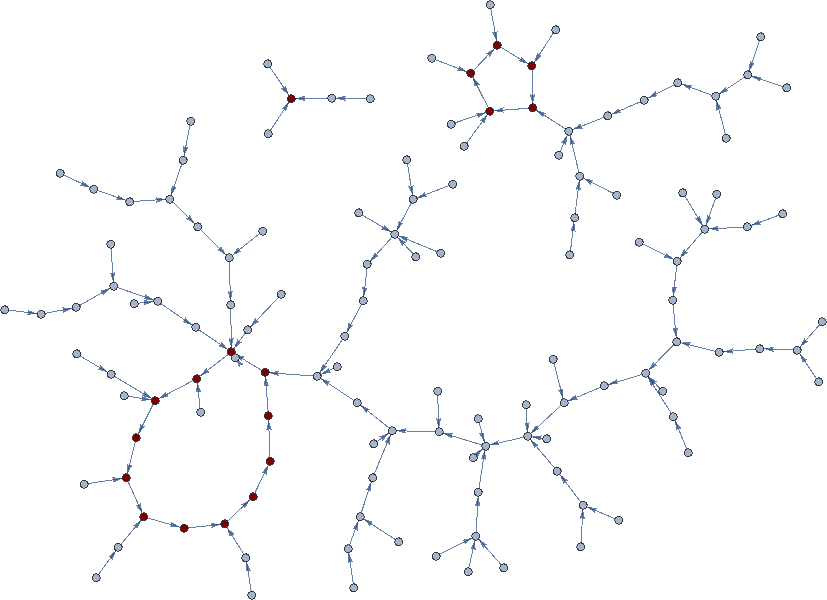 The cycles do not generate more collisions when doubled. Each thread meeting a cycle contributes one collision, If All the threads are of length 1 no more collisions are added when applying twice in any other case the number of collisions increases.

Using the @MeirMaor answer as starting point, there are good clues and illustration.

Using also the concepts of "bad hash function" (instead "good" ones like SHA3) and the "empyrical metric for collision rates" concept of this other question/answer.

Suppose $H$ as a black box — and the two connected boxes, $H \circ H$, for our purposes will also be a black box.

So, we need to check it by experiments and some statistical analysis of the experimental results.

Suppose also some "metric" as defined here... There are a sample $S$ where some number of collisions $c>0$ arrives,
$Pr_c[H]=\overline{c}/|S|$
and we do same experiment many times with sample sets with same size $|S|$, so we have an averaged $\overline{c}$.

In that context the main differences between $H$ and $H \circ H$ and valid hypothesis are:

Representing the first hashing as a set of points (no matter if there was or not a collision, as hypothesis-1), and the second hashing a transition from a point to other point in the same space. 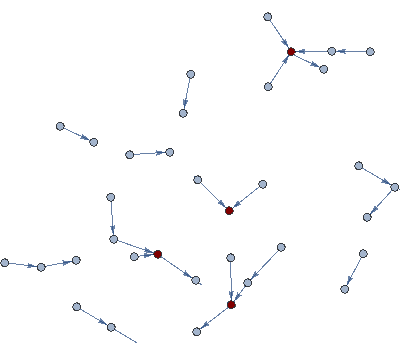 (the illustration is exaggerating, the very most frequent is node-arc-node)

As showed by the illustration, a good metric is the simple counting of collisions $\overline{r}$ in the second hashing (red dots),
$Pr_r[H]=\overline{r}/|S|$
and ignoring any collision of the first:

We conclude that the answer to the question is afirmative when $|S|<<|U|$ and $H$ is a "bad hash". That is, doubling "bad hashes" will always increase the collision rate probability.

PS: as @SqueamishOssifrage remembered here, to avoid the "nothing to say" we can study simplified versions of hash families,

... we structure the hash family to iterate some internal scrambling function for a variable number of rounds, and study a progression of numbers of rounds...

The reduced-round versions of "good hashes", like BLAKE or SHA3, can be imagined as "bad hash" in the above method.

As reduced-round versions have the same behaviour, accepting the induction, the answer to the question will be afirmative also for "good hashes" (!).

Rigour and other considerations

Semantic: the point about "collision probability" versus "collision resistance" cannot be emphasized enough... See comments (or please edit here, it is a Wiki!).

Not the answer you're looking for? Browse other questions tagged hash collision-resistance multiple-encryption or ask your own question.

24
“Weaknesses” in SHA-256d?
5
Is double hashing collision resistant?
4
Is there are a metric based on collisions to compare bad hash functions?
2
Would SHA-256(SHA-256(x)) produce collisions?
0
The collision rate probability decreases when using compression?

0
How to figure out the size of the output of a cryptographic checksum function
5
Is double hashing collision resistant?
1
Hashing - Digital Signing and Trivial Stretching
4
SipHash's (non-)collision resistance
4
Hash function used to find duplicate data, at what point is the risk of a chance match sufficient to switch to a stronger hash or bytewise verifying?
2
Is CRC32 birthday attack independent of input?
0
The collision rate probability decreases when using compression?
4
Is there are a metric based on collisions to compare bad hash functions?
8
What is the probability to produce a collision under two different hash functions?
0
Is it Ok in practice to rely only on the first 64 bits of a scrypt hash in this scenario?