Introductory Chemistry course, non-science majors. I am trying to explain entropy without using the word randomness. Example: a deck of 52 cards has multiple states of card order. That we may like a particular order, say suit order, does not mean suit order has less entropy than does any other particular order. To reduce the entropy of a deck of cards one would have to reduce the number of cards. So a deck of 51 cards has less entropy, less possible arrangements, than a deck of 52.

Any comments will be gratefully studied.

Unfortunately, order and random are two ends of a scale. And where you are on that scale is called entropy. If you're asking on a cryptography forum, we have to look at this from an information angle.

Thermodynamic entropy from an information perspective

If all the balls are at rest because the stuff is cold, they are very ordered. It is easy to describe their positions and thus the state of the material.

If the stuff is hot and all the balls are flying around everywhere (randomly), it's very difficult to totally describe the state of the gas molecules. You'd have to write down all of the current 3D positions of them and their respective velocity vectors. That's a lot of writing and thus lots of entropy.

Entropy from a poker and information perspective

Consider the two decks. It's very easy to describe this one:-

It's simply C,S,H,D,1-10,J,Q,K in code I just made up. You might be able to shorten it. This illustrates that an unsorted deck doesn't have a lot of entropy. 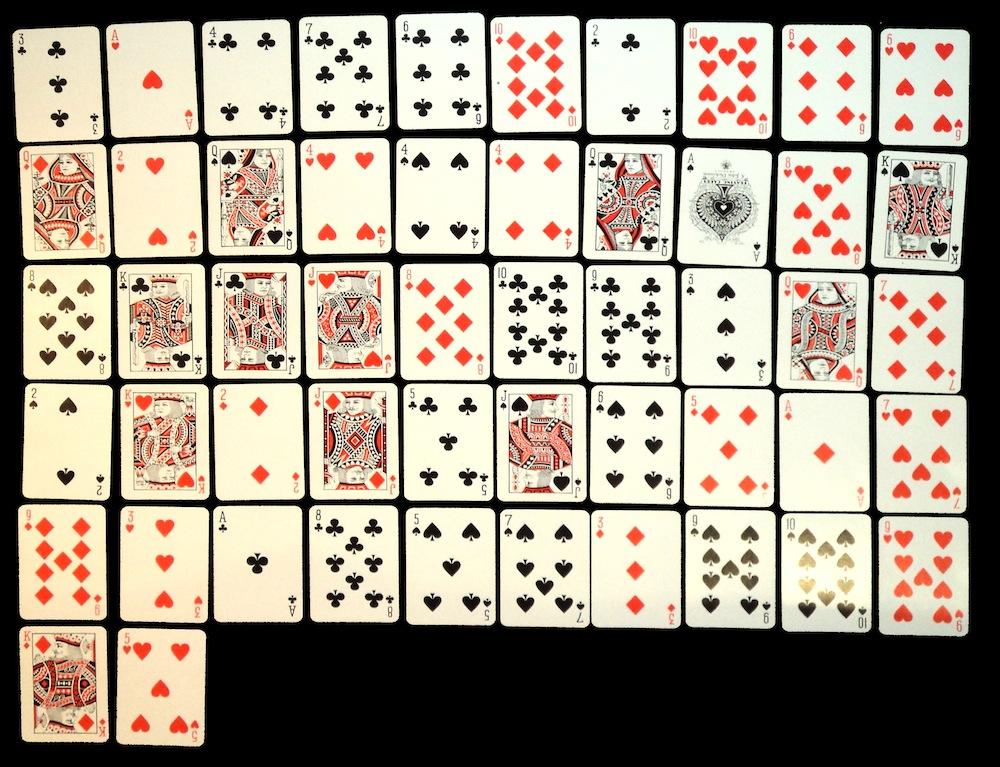 You'd have to write down each card individually, there's no other way unless you can find some sort of mathematical relationship between each card. If this is a fully random shuffle, the state contains $ log_2(52!) $ bits, or about 226 bits of binary information. It cannot be completely described with less.

To answer your question of removing cards - not necessarily. You could just slightly order the cards, forming relationships between them. Say all Diamonds are ordered as new. That would reduce the entropy whilst keeping the same number of cards.

Entropy = information necessary to describe a system or state.

In cryptography, if you know the information, entropy = 0. So cryptographic entropy is the enumerated amount of uncertainty. And we measure that in bits.

4
Entropy calculation
8
If a SHA256 hash with high entropy is then hashed with one made from low entropy, is the resulting hash higher/same/lower entropy?
5
Consuming of entropy
12
Relation between entropy and min-entropy
2
Registration Code Entropy
2
Can adding bad entropy to good entropy, make a system insecure?
5
Can a deck of cards be used as a practical source of cryptographic randomness?
6
Entropy preservation through cryptographic hash function
5
What are the key difference between Shannon entropy and Guessing Entropy?