To estimate the time for brute-force attack we need to compute keyspace size divided by hash rate, where the hash rate (hash/second) varies depending on the computer's capabilities.

The website https://bench.cr.yp.to/results-hash.html shows the hash rate for different computers. Can you explain the following two confusing phenomena?

The hash rate decreases as the message size increases.

What's quoted by the benchmark decreases with the message size. But it is not a "hash rate", at least in hashes per unit of time on a certain computer as thought by the OP. The unit is cycles per byte, thus higher values mean proportionally more cycles spent, more time spent, and less hashes performed (with all of many other more important things being equal).

Assume computer(s) used to their full computing power for hashing, with a total of $u$ CPU(s), each with $n$ core(s) running a frequency $f$ (in Hertz), for total time $t$ (in seconds), to hash $m$ messages each $b$-byte, with each hash produced requiring $c$ cycles of one execution thread of one core of one CPU. It holds that $$u\cdot n\cdot f\cdot t=m\cdot c$$ Derivation: Left side is the number of cycles across all $u\cdot n$ cores, with $f\cdot t$ cycles for each core given frequency and time spent. Right side is the number of cycles $m\cdot c$ necessary to hash the messages, given how many messages there are, and how many cycles are required for each hash. They are equal due to the assumed "used to their full computing power", which can be closely met when $m\gg u\cdot n$ by splitting the messages evenly among the cores.
What the linked benchmark quotes is $c/b$ in cycles per byte, where cycles are those actually used by one thread running sequential code computing the hash. This quantity $c/b$ depends a lot on the algorithm, the CPU architecture, and the quality of the code (including fitness to the CPU, compiler..); on the value of $b$, especially when low (see below), which is why $c/b$ is given for several values of $b$; and seldom on the rest.
Note: Thread(s) running on a core have to share that core's $f\cdot t$ cycles. My understanding of the benchmarks quoted is that the number of threads per core is considered part of the CPU architecture; if that could be adjusted, e.g. to 1 or 2 at boot time, there would be separate benchmarks or/and the $c/b$ quoted would be the highest achieved.
Note: The benchmarks quoted, and the present answer, stick to fixed hash output size, e.g. 32-byte. SHAKE128 has variable-size output, and this could be an extra parameter.

Overall $c/b$ mostly lowers as $b$ increases (converging to some constant), but with initially noticeable sawtooth jumps. 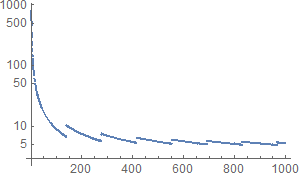 In an earlier question and comment to another, the OP mentions wanting to hash 40-bit messages and wondering to what degree that's vulnerable to brute force search of the message. Let's evaluate how much time the hashing (which dominates the effort) would require to cover the whole message space.

That search is easily feasible for an individual with a single computer. Further, a rainbow table would allow to make that computation only once, then invert any hash of a 40-bit message in seconds with e.g. a mobile phone.

The task is so easy that using CPU(s) is adequate (they are easiest to program). For larger attacks, after an initial coding effort, GPUs would be more effective on speed, or/and cost and energy (their superior performance comes from $n$ being many hundreds for each GPU). FPGAs and ultimately ASICs are even superior (they have potential to decrease both $c$ and additional investment per added hashing capacity, by exactly tailoring the circuitry to the task). That's how the aggregate of bitcoin miners gets a hash rate over $2^{82}$ SHA-256 hashes per day (May 2018, per that source reporting SHA256d hashes comprising two SHA-256).

After noting that hash rate is in cycles/byte, that observation amounts to: in a comparison, a core of a CPU with a higher digit following "Core i" in its Intel marketing designation happens to have the desirable property of requiring less clock cycles than the other one.

The values of $b$, $u$, $n$ and $f$ have more essential influence on hashing performance of a computer, which is $m/t=u\cdot n\cdot f/c$ hashes per second, with $c$ proportional to $b$ for large $b$.

Summary from the linked webpage:

Note that the "hashrate" is given in cycles per byte. This is because the "speed" of a hash is mostly linear in the amount of bytes; i.e., twice the amount of data takes twice the time. This is not true for short messages, where the setup time (initialization) of the hash function takes a more significant time.

You can see that when going from the long messages to smaller messages; the amount of cycles needed per byte goes up, since the initialization time gets divided by a smaller amount of bytes.

The cpb actually measure the time it takes per byte for the hash function. For the i3, this value is higher. This is not because it's "an i3" compared "an i7". It is because we're talking about a newer i7 versus an older i3 (seventh generation versus second generation). Indeed, the cpb value tries to measure the CPU architecture, not the tier, price, or clock. This makes comparisons between different CPUs and architectures possible.

Not the answer you're looking for? Browse other questions tagged hash brute-force-attack sha-3 or ask your own question.