Why is this voting system not secure?

Why not have each person simply treated as a counterparty to an off-the-record chat?

This scheme has the following properties:

Is there a flaw I missed? Why can’t we do voting like this?

Unfortunately, most of the reasons that e-voting is not popular have nothing to do with the integrity of the underlying mathematics. This makes the question slight moot on a cryptography forum, but the following un-cryptographic answer still entirely relevant. Unless you solve the following (non exhaustive) problems:-

Before the deluge of up votes, please consider that some cryptography is fine academically on a black board, but it often has to operate in the real political and social world. A broader view has to be taken of cryptography and it's role in society.

Regarding voter anonymity in parts #1 and #3, and comments. The following is the back of the current UK Parliamentary Election ballot paper. You may spot the unique bar and QR codes. The bar code is over 70mm long so it's not really a secret. It's not a problem as long as the voting remains paper based. 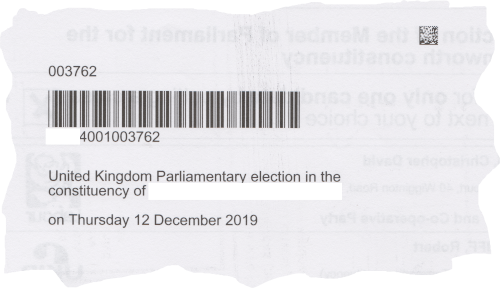 Not the answer you're looking for? Browse other questions tagged provable-security voting key-distribution or ask your own question.

10
Can a device prove the identity of its own code?
3
During electronic voting, how does one hide the choice from Voting device?

0
Voting system validation
6
An electronic voting system
12
Are there reasonably secure online voting implementations e.g. for student council elections?
7
E-voting: public tallying vs. vote selling
2
Anonymity of Paillier cryptosystem in e-voting system
4
What is chain voting?
47
How is the Swiss post e-voting system supposed to work, and how was it wrong?