What's happens if we use the weakest S-BOX for AES?

I'm in research of generating Dynamic Secret S-BOX for AES based on 2 Keys (Encryption Key and *I Called S-BOX key). If (worst scenario) I randomly generate the worst S-BOX in an encryption. What would happen? How much it affect to the security of the encryption? I need a reference about this issue. Thanks

See: How can one construct the weakest S-box ever?
and How do I choose the best 3*3 s-boxes?

I believe that user Hend's question is not "how to design the worst possible S-box" but about "having generated an S-box randomly how do we know it is bad, how is that measured?".

A construction of S-boxes that was a trifle, insignificant, a minimis non curat would simply encode during half the rounds and decode during the other half, producing output equal to the input. If the number of rounds were odd the algorithm could leave the output in a state that was equivalent to a single round.

Obviously such poor design is trivial to discover. Where the problem lies is "when presented with an S-box construction that appears complex how do we disprove that". That is the question that I touch upon with this answer.

There are different cryptanalysis techniques and different ways to measure security. Some are published and some are secret. It's not particularly useful to measure an algorithm's security by a published method if a secret method exists for easily cracking the code.

For example: If it were though that there were only 10 ways to approach the cryptanalysis, the first 9 taking a little over a month each to execute but without any certainty of success and the 10th method providing absolute certainty of success but taking a year to produce the result, it makes sense to try the first 9 methods; you don't know which one will be successful but the worst case is it would take as long as simply applying only the 10th algorithm alone.

Similarly, if there were an 11th method, unknown to almost all cryptanalysists, one can not say that any S-box construction is opaque; that it does not reveal itself, and most importantly the original input. This answer can not speculate on what we don't know and will be limited to published measurements of complexity.

Some of the measurements are resistance to:

In "An improved AES S-box and its performance analysis" by Jie Cui, Hong Zhong, Wei Yang they provide the formula for calculating the above metrics, and offer a list of papers they referenced; unfortunately the first four that I searched for are paywall only. The referenced papers are probably not necessary to understand their paper or this answer.

In their paper they offer this table on page 2301: 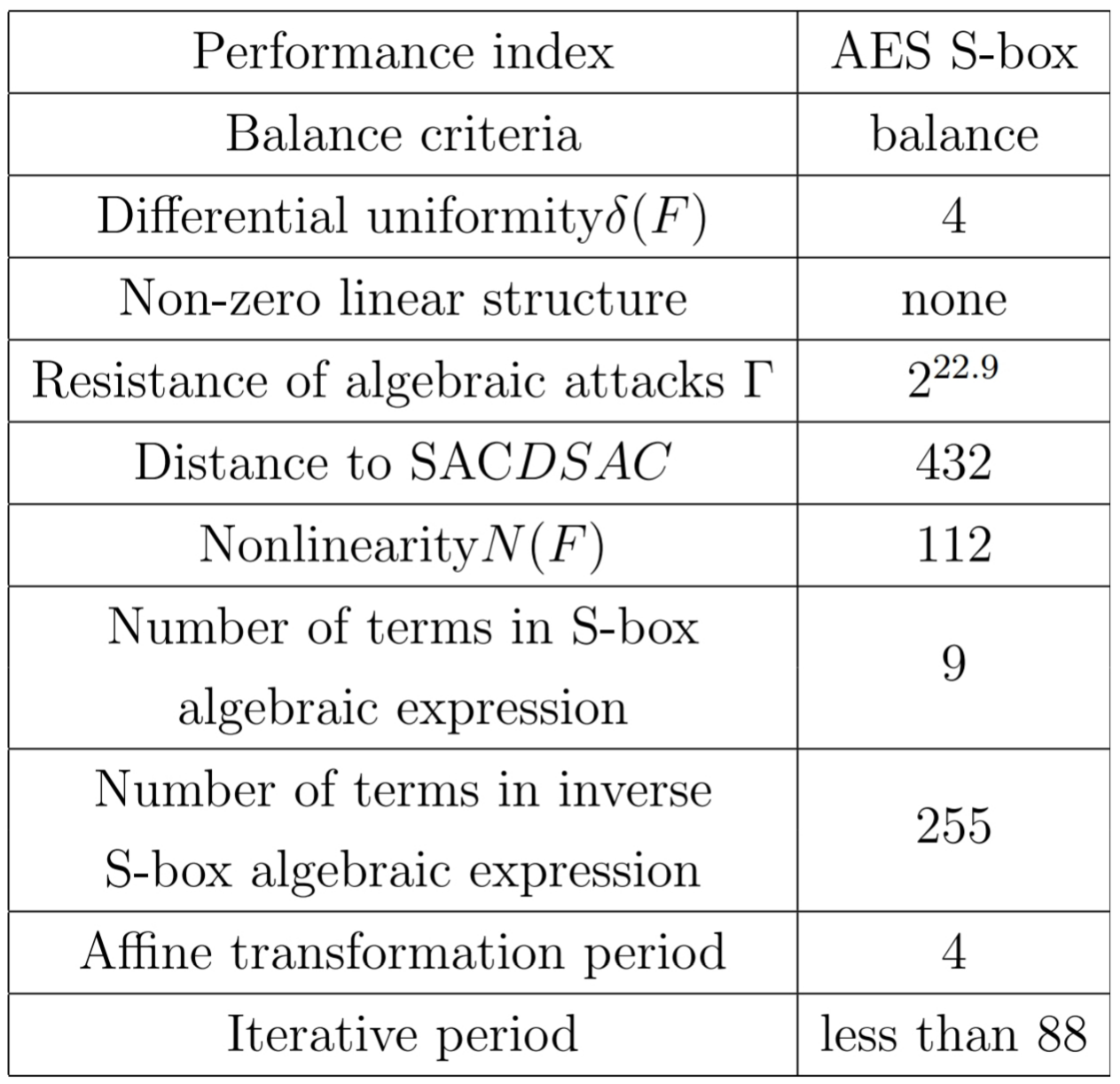 $[3]$ "Essential algebraic structure within the AES" by S. Murphy and M. J. B. Robshaw, Proc. of the 22nd Annual International Cryptology Conference on Advances in Cryptology, London, pp.1-16, 2002.

As you can see the weakest, even stronger S-boxes, are suspicious. Belief that no one anywhere has a means to break the algorithm is probably misplaced. Some S-boxes would be more susceptible to one kind of an attack over another, so there's not one particularly strong or weak one without improvements to the original algorithm. The authors offer an improved version and their analysis of that, in addition to the original.

In the thesis "The Design of S-boxes" (direct .PDF link) (2010), by Jennifer Miuling Cheung and the paper "The Structured Design of Cryptographically Good S-Boxes" (1990) by Carlisle M. Adams and Stafford E Tavares, J. Cryptology. 3. 27-41. 10.1007/BF00203967 and "Modification in Designing of Substitution Technique Using 4x32 S-Box in Data Encryption Standard" (direct .PDF link, or 2nd source), (2018), by Sumit Chaudhary, N. K. Joshi, and Foram Suthar - the general consensus has improved over the years but is currently:

Five design factors that must be meet for Boolean functions to construct a cryptographically good S-box:

The newest criteria is balance, essentially a test of the output compared to a true random number.

The worst case S box would be linear. Making the entire cipher linear and breaking it would be trivial.

Wouldn't the worst S-box just return whatever was input? Then you'd just have the keys to contend with, which a plaintext of all zeros would return.

5
Keeping IV secret for AES CFB mode
1
What do I use as the encryption key and initialization vector in AES cfb128
2
Can I use the output from a DRBG directly as K for AES, or do I need to use a key generator algorithm?
2
Best practises to generate IV for AES-CTR in this scenario
2
Encrypting decimal values with AES
5
Security of the AES with a Secret S-box
2
Cryptanalysis of a feedback shift reigister with an S-box
1
Exploitability of AES in CBC Mode For Recovery of Plain Text