Is sharing the modulus for multiple RSA key pairs secure?

In the public-key system RSA scheme, each user holds beyond a public modulus $m$ a public exponent, $e$, and a private exponent, $d$.

Is this safe for Bob?

I had a similar problem, and it took me a long time to figure out all the math, as some of the proofs can be rather terse. So, I took it upon myself to write a full explanation of how to factor N, without all the symbols and relying on a bit less prior knowledge.

This is an application of the shared modulus attack explained by Boneh in his analysis of RSA attacks.

i.e. computing the square root of one. Now, note that $p\,|\,N$ and $q\,|\,N$. Since the zero product property holds in modular arithmetic when the modulus is prime, it is true that:

This has a solution $y = 1$, which is trivial. The solution where both remainders are $-1$ is also trivial ($y = N - 1$), and is also not useful. However, now consider the following case:

We also know that any root that is non-trivial (i.e. is not 1 or -1) must come from one of the two non-trivial cases we looked at because we know that the solutions to these equations are unique. This means that the above logic works for any non-trivial root we may find.

The second is much simpler:

In other words, the algorithm can be stated as:

The attack relies on the fact that you can easily generate numbers that are congruent to one modulo $N$. Additionally, it is easy to take the square root of these numbers by dividing the exponent by two. There is a chance that taking this square root yields a non-trivial square root of one modulo $N$, which allows you to easily compute a factor of $N$ by using the euclidean algorithm. This is a probabilistic algorithm, in that it relies on the solution being non-trivial. If no non-trivial solution is found, the algorithm needs to start over with a new $x$.

The chance of obtaining a non-trivial solution is an important consideration when using this algorithm. So to determine this probability, consider an approach which picks random $x$ modulo $N$. $x^e$ for some exponent $e$, then, is also random. Also note that, for any given modulus $m$, the set of integers are evenly distributed modulo $m$ among the set of positive integers less than $m$; i.e: $$P(x^e \equiv 1 \bmod{m}) = P(x^e \equiv m-1 \equiv -1 \bmod{m})$$ The proof for fact 1 requires the solution of a system of two equations, each of which is “picked” from two possible equations. There are four possible systems of equations, and each is equally likely because of the equal distribution of numbers mod $m$. Therefore, the probability that the $x$ satisfies any one of these system is $\frac 1 4 = 25\%$. Since two of these systems yield non-trivial solutions, the probability of a non-trivial solution given a random $x$ is $50\%$. This probability is improved by continuing to calculate square roots in the case that $\sqrt{x^e} \equiv 1 \bmod{m}$. However, since this number is related to the previous number in the sequence, one can no longer make a strict randomness argument that the next term in the sequence also has a $50\%$ chance of being non-trivial. You can say, though, that: $$P(\exists \, \text{non-trivial solution in $s$}) \geq 50\%$$ for the definition of $s$ given in the algorithm description above. Therefore, the generation of a constant, finite number of sequences from random values of $x$ can provide an arbitrarily high probability of yielding a non-trivial solution.

Here, then, is code (in python) that performs the above partial factorization:

This code will generate terms of the sequence $s$ until it finds a nontrivial square root of one modulo $N$:

In the worst case, this computes $x^k$ using the square-and-multiply method, which is $O((\lg N)^3)$. As stated earlier, the probability of the function returning a value (vice ‘None’), is at least $50\%$ for random $x$.

Finally, here is some code to actually factor the modulus, given a valid RSA key:

Finally, here is an example of running this algorithm to factor an RSA modulus:

This runs quite quickly, and demonstrates the algorithm does correctly factor N. Note that the order of the factors changes from run to run, depending on which root is found first. The order of the two factors does not matter, though, so this is algorithm is sufficient for the purposes of attacking a shared modulus cryptosystem.

To return to the original problem, if Bob shares his first private key, and all his keys share a modulus, then Mallory can factor the modulus using this algorithm. Once the modulus is factored, she can compute $\phi(N)=(p-1)(q-1)$. With knowledge of $\phi(N)$, computing the modular multiplicative inverse of the other public keys (i.e. the corresponding private keys) is a simple application of the extended euclidean algorithm.

No, it isn't safe. Knowing the private exponent $d$ (and a corresponding public key) allows factoring the modulus $m$, and this allows retrieving all other private exponents (given the public ones).

Bob should generate a new modulus, this is not that expensive. Also, Bob should revoke his old public key, if it is registered anywhere.

The answer of @robert-mason is good but rather large.

Here is the algorithm and the proof just after. 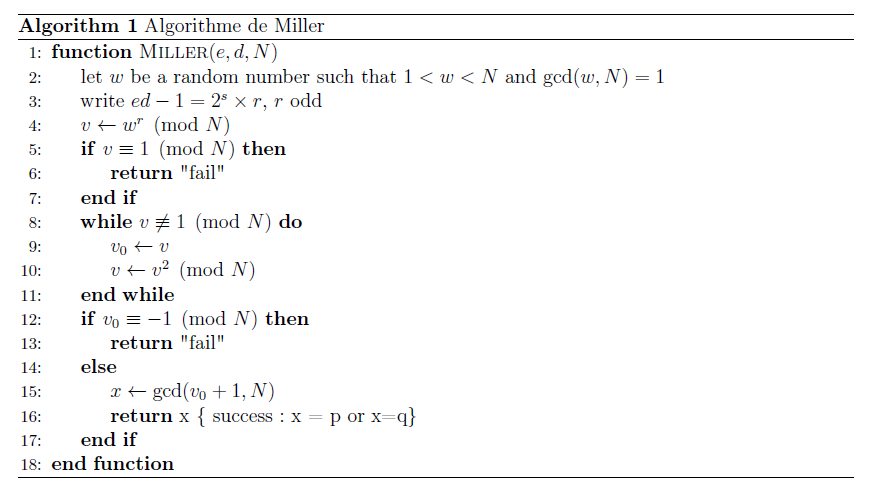 Source of the proof here (at the end of part 1).

4
Is there an asymmetric encryption algorithm where the public key cannot be derived from the private key
5
Factor RSA modulus given many valid encryption decryption exponent pairs?
2
Shared modulus attack on RSA
1
How many p and q pairs are there in a 1024 bit modulus?
-1
about rsa decryption with given n,e,2d+phi(n)
0
Is it possible to correct the exponent of an RSA public key if it has been altered?

3
Is symmetric key encrypted with server's public key secure
9
uniqueness of the RSA public modulus
0
Prime modulus for RSA and sharing a secret?
3
Common Modulus Attack in RSA
1
Using RSA keys for Broadcast Encryption?
2
RSA with shared modulus multiple primes
1
Exploit RSA , given some information about n
1
How to exchange a secret through untrusted server in two steps?
1
Why is a smaller value preferred for the public key in RSA?