Does AES encrypting /dev/zero and feeding output to AES again increase entropy of the ciphertext?

to AES again. What this does is take a passphrase out of urandom and encrypt the output of /dev/zero - so taking 1 passphrase and an endless number of zeros, which outputs random numbers. this way AES is used as a random number generator. This line can be used to fill up a file on a disk with random numbers. It's way faster than dd'ing /dev/urandom to a file. One can also substitute "file" with /dev/null, just to see how fast the system is encrypting and writing to null.

So I wonder what happens if I would feed the output of that line to AES again. **Would the output change in a way?

As I think it should not change anything — the randomness of the output should be exactly the same, shouldn't it? Is there a practical way to measure the entropy of the output?** I think no, as it should be good enough to not have any statistical anomalies, so there's no way of measuring an increased/decreased entropy - or am I missing/confusing something?

Counter intuitively though, and in the general case, simply pulling a stream from /dev/urandom would have a greater entropy than your OpenSSL line. You don't need to re-encrypt with another AES. The randomness of your scheme depends on the 128 bits of entropy marshalled by the dd command for use as a key. So no matter how long file is, it will only ever be one of $2^{128}$ possible sequences. It will always have 128 bits of unknown entropy. You don't have to measure it.

To paint/post a picture, the current Linux random number generator looks like:- 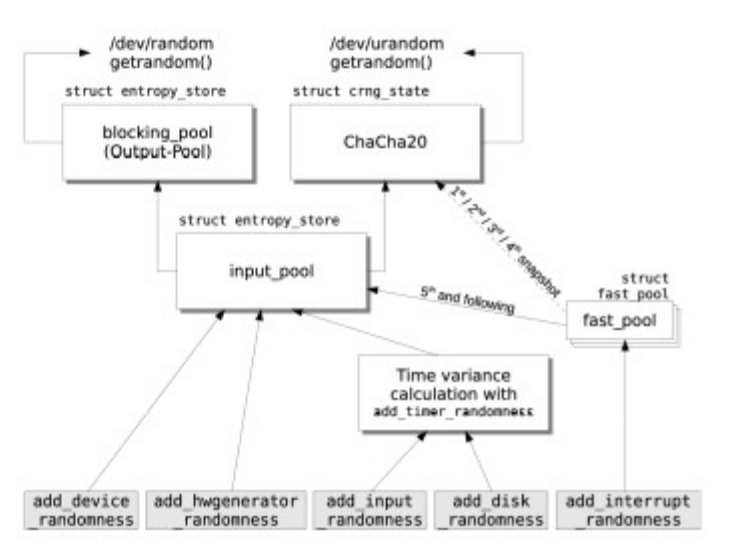 with /dev/urandom sitting there in the top right. (/dev/urandom is the output of the ChaCha20 cipher which is analogous to the AES bit in your scheme.)

However, the ChaCha20 cipher is often reseeded from entropy pools (in the centre and right). (Un)fortunately, you've picked what is probably the most complex random number generator in the world to ask your question about. It's a little difficult to determine the exact reseed rate, but the existence of a reseed function means that any long sequence will have triggered reseed events. That's partly why it's so much slower, but also due to a non optimised ChaCha implementation. Thus such a sequence will have $n \times 256$ bits of unknown entropy, where $n$ is the number of reseed events.

So I suppose you could loosely say that /dev/urandom is more random than your OpenSSL scheme. Unless you have a nuclear arsenal in your shed, I don't think that it makes a tangible difference though.

Now your question is if you would replace the /dev/null with the input file, using a new block of 128 bytes taken from /dev/urandom as password. Well, the good news is that it will add another amount of randomness to the original stream. How much entropy that entails depends on the internal characteristics of the used /dev/urandom implementation. Of course, if you would use the original password then you would cancel out the operation and produce a file with all zeros.

Using CTR to create a fast PRNG is a good idea that is used quite a lot. But remember that although it is very fast, it doesn't reseed. Using /dev/urandom is a bad idea if you want to have as much entropy as possible though. For this kind of use /dev/random is a better choice.

Using a bad password generation mechanism such as the default OpenSSL one will however bring back the maximum amount of entropy to 128 bit max due to MD5 being used to derive the key. If you consider that you could have up to 128 bytes of entropy, that's quite a shame. You would be better off using the -K option which allows for hexadecimal encoded keys instead. In that case you retrieve 32 bytes of randomness and use the full 256 bits of that directly for AES-CTR.

So if you want to increase the possible entropy, try and use this:

and use it on any number of zeros. Note that on some systems this may deplete the entropy pool if you perform a lot of these commands.

Here -K is used to replace the password with a 256 bit key, which is supplied in hexadecimals using the dd if=/dev/random bs=32 count=1 2>/dev/null | od -v -An -tx1 | tr -d ' \n') command, where od creates hexadecimals including spaces and newlines, which are removed using the tr command. The IV can be kept to all zero as the key will differ for each command anyway.

Final note: writing random data to an intermediate file is usually not a good idea. You are much better off programming this. In case you require OpenSSL then you could use C or any wrapper library for your choice of language that gives you enough functionality.

Not the answer you're looking for? Browse other questions tagged aes randomness entropy or ask your own question.

2
CSPRNG's (ELI5) What's the purpose of multiple seeds/ regenerating sources of entropy (i.e. /dev/random)?
5
PRNG determinism?
4
How many bits of entropy can I expect from /dev/urandom in iOS?
2
Is it okay to include relative time for true random number generation?
3
Usage and limitations of sponge functions for PRNG
0
Is it a cryptographic risk to share the same encrypted data over and over again?
2
Why does it make sense to use min-entropy for measuring cryptographic random data?
1
Dieharder How can I make my input file suitable for Dieharder?