Regarding the Non-Overlapping Template test, this test normally gives us a bunch of p-values (148 values). I would like to ask that how do we interpret those values into a single p-value for presenting in an academic report. I have seen many papers illustrate as only a single p-value. For example, 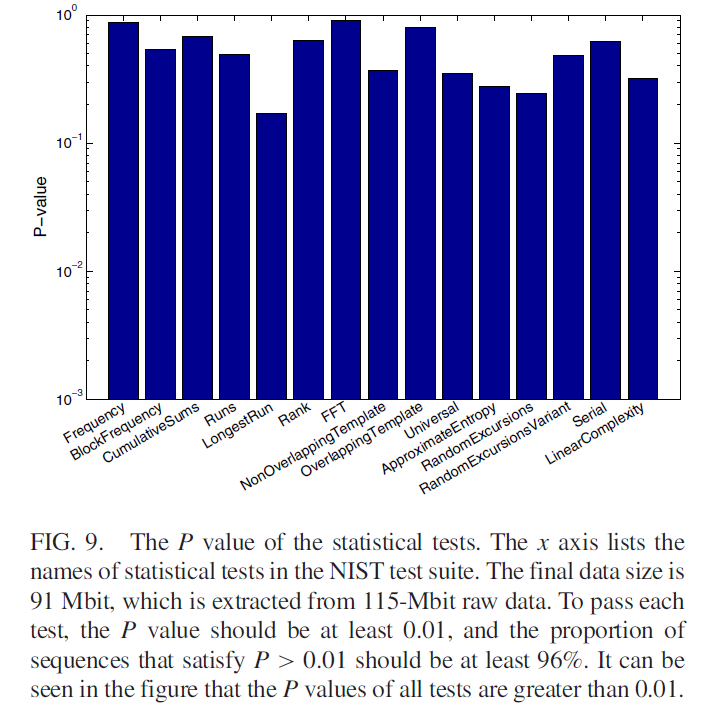 In this work the p-value of Non-Overlapping Template test is shown as a single value. I have tried using fisher method to combine all of the p-values but by it's characteristic, the p-value after a combination drops exponentially. Is there any simple way to interpret ?

Thank you in advance.

There are other methods too for combining a collection of $n$ values $\{p_i\}_{i=1}^n$ into a single test statistic with a known distribution:

Why should you prefer one of these over the others? They all give rise to statistical tests that have any prescribed false alarm rate you want, so they must all be good, right? Well, there's an elephant in the room.

Why raise an alarm when you roll a 1, rather than, say, a 7, on your d20—i.e., why do we care about $p < 0.05$? What's really interesting is the alternative hypotheses. The null hypothesis is that the device is working correctly as intended (and perhaps that working correctly means a perfect uniform distribution). But the test is valuable insofar as it raises alarms at a substantially higher rate for plausible deviations from the null hypothesis—for instance, a significantly higher number of one bits than zero bits, which can happen in samples under the null hypothesis but only with low probability. What plausible deviations might there be?

Study the physics or engineering of the system—don't just discard them as waste byproducts of the process that led you to a good NIST test result.

What matters for security is showing that the smartest, best-funded physicists in the world can't do better than a certain advantage at predicting what the outcome is, and that if the device fails in some way then you will detect that failure and stop relying on it.

The $p$-values of NIST statistical tests on samples you took during development? These are more like the waste byproducts of a process that led you to a good hardware RNG.

As you're dealing with randomness, the test results have randomness within them too. So combinatoric tests have to be statistically based. I've never seen Fisher used for this in the common randomness tests. By definition, $p$ is uniformally distributed 0 to 1 for the null hypothesis, ie. data is properly random. A common technique is for a Kolmogorov–Smirnov (KS) test against the expected uniform distribution. The test then outputs a single $p$ value for uniformity and thus data randomness. Hope for $p > 0.01$.

I only ever generate enough data for Diehard testing, but you see this approach used therein. For example, the 3D Spheres test consolidates 20 $p$ values into one:-

You can also see it being used in the following NIST results snippet taken from a NIST random excursion results Q & A which is talking about their interpretation:-

You should be able to adapt this technique to the 148 values of your NIST Template test if the program didn't produced them already. Spreadsheets and standard programming libraries can help.

2
Conditioning Component in Entropy Source
-2
How to interpret the entropy results for a NIST test file?
2
NIST random excursion results

17
Why did NIST remove The Lempel-Ziv Compression test from the Statistical Test Suite?
5
Interpretation of the results of NIST (p)NRG suite
6
Are my random numbers really "bad" or is that a statistical effect which "must" happen from time to time?
2
Interpretation of certain results of NIST Test Suite
1
Why does mt19937 fail the universal test in NIST SP 800-22?
3
Why does the NIST Runs Test include a Frequency Test?
1
Does Endianness matter in NIST SP800-22 test?