Improving efficiency of an “encryption” algorithm based on a chaotic map

I've implemented an "encryption" algorithm that uses the deterministic chaos of an extended logistic map:

The data is first chunked into $256\cdot64$ bits which I visualise as "squares". The initial values of $x,y,r$ are determined per-chunk by sampling bytes in a SHA-256 hashed key-data pair mixed with a hash of the index of the data chunk. I then map $x,y$ values from the range of the unit square to specific bits in the chunk and flip those bits iteratively, $(256\cdot64)^2$ times per chunk. 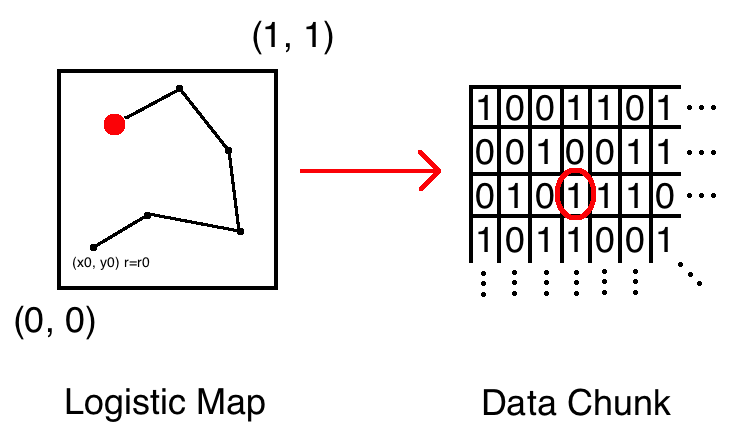 I am now looking to increase the performance of this algorithm, and I had an idea to apply some kind of chaotic "surface" to each chunk, sensitive to initial values. I would then only need to compute the value of this surface once per bit with a single function to spread the chaos over each chunk.

Having browsed Wikipedia's list of chaotic maps, I couldn't really seem to find anything that fit what I had in mind. Are there any known functions that might yield a good result?

Edit: After suggestions that chaos theory isn't possible to make secure, I wanted to find out whether other algorithms exist that use chaos theory. Apparently there is a large quantity of literature on this topic, especially focused on image encryption. Could someone explain the main sources of insecurity in a chaos theory based encryption algorithm?

If you already use a proper cryptographic primitive such as SHA, why would you use the "almost snake oil" chaotic encryption mechanism?

Thus they offer no security advantage over traditional cryptosystems.

Not the answer you're looking for? Browse other questions tagged algorithm-design or ask your own question.