Note: IV+1 is used for generating cipherText and the first IV is saved for encrypting the generated hash at later point of time when cipherText is generated.

am I doing any mistake?

This question is asked to ensure the above relation of AES-GCM with AES-CTR is correct and help others to understand AES-GCM in a simple and convincing way.

AES-GCM,or more generally GCM is a mode of operation for a symmetric block cipher. It stands for Galois/Counter Mode. It provides Authenticated Encryption, guaranteeing both confidentiality (data secrecy) and integrity (data authenticity).

Confidentiality is provided by the Counter Mode: roughly a counter is encrypted and the output is xored with the plaintext. If more than one block has to be encrypted, the counter is incremented.

To be secure, GCM requires that the counter is used only once (See here for details Nonce reuse vulnerability). It is usually generated as the concatenantion of a NONCE and an actual counter (e.g.: $NONCE || 0...0)$. 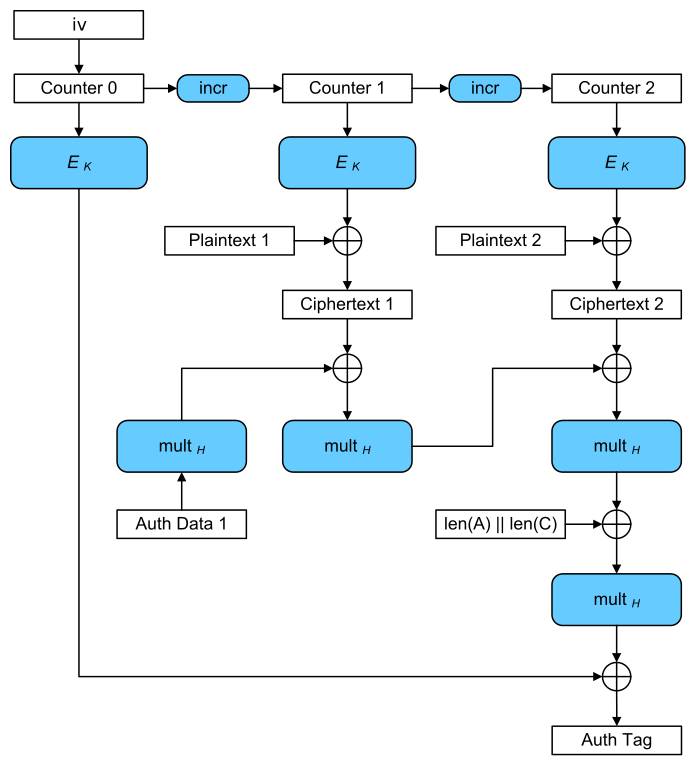 From a confidentiality point of view they are the same. Indeed, AES-GCM is defined as AES-CTR + GMAC as authentication code.

The difference is that AES-CTR does not provide integrity protection and an AuthTag has to be added (could be HMAC, or CBC-MAC for example); on the other side the AES-GCM provides both protection (confidentiality and integrity).

Not the answer you're looking for? Browse other questions tagged aes aes-gcm or ask your own question.

2
Can AES in CCM or GCM counter mode interoperate with AES in “plain” counter mode (CTR)?
8
What are the constraints on using GCM with a tag size of 96 and 128 bits?
2
How is decryption done in AES CTR mode?
4
How does the GCM encryption limit affect TLS connections?
4
How to choose the size of the IV in AES-GCM?
0
AES in CTR mode, with a single key, and an IV derived from the plaintext
9
Can a zero nonce be safely used with AES-GCM if the key is random and never used again?