Trying to write a C program that implements the DES standard (FIPS 46-3). I am unsure about how the standard should be interpreted when computing the various permutations specified in the document, with regard to the external data that is loaded in the algorithm.

For example, the IP (Initial Permutation) takes the 64 bits of input and arranges them so that the result has bit 58 of the input as its first bit, bit 50 as its second bit, and so on.

Assuming (is this correct?) that "first bit" of output means MSB, the problem still remains with what is meant by "bit 58" of input. Where do we start counting?

For example, if the input is read from a file in a buffer (C array) of 8 bytes, where is the 58th bit to be found: in buffer[0] or in buffer[7]? Both seem plausible: in buffer[0] (because logically is the last in the row, assuming it was read first) and in buffer[7] (assuming we believe we are reading an integer starting with its MSB).

What is the community consensus about this issue?

All standard literature on DES, including FIPS 46-3, number data bits starting from 1 for the most significant bit of the first word in reading order, incrementing by 1 as we go to lower-order bit, and moving to the next word after each multiple of the word size in bit. Here word can be 8-bit (for data and key), 32-bit (state formed by L/R), 28-bit (internal key formed by C/D).

The DES Standard is an interoperability standard describing compatibility with the hardware implementation found in IBM's patent.

The initial permutation describes taking 8 input bytes bit ordered 1 to 8 with 1 having the greatest binary weight and providing an initial LR Block comprised of even and odd input byte bits.

Note that in the programming language C for instance, bits in a char of byte size would be labelled 7 down to 0 and not 1 to 8 as here.

The inverse initial permutation does the obverse while also including the output block reordering to RL. Note the IP-1 table appears rotated 90 degrees clockwise here.

From a hardware perspective you can load 8 successive bytes in the Left and Right registers by shifting them in serially where the two 32 bit registers are comprised of four 8 bit shift registers. (For the simplest DES implementation these registers also parallel load.)

Permuted Choice 1 does something similar for the key which is loaded into the 28 bit C and D blocks. 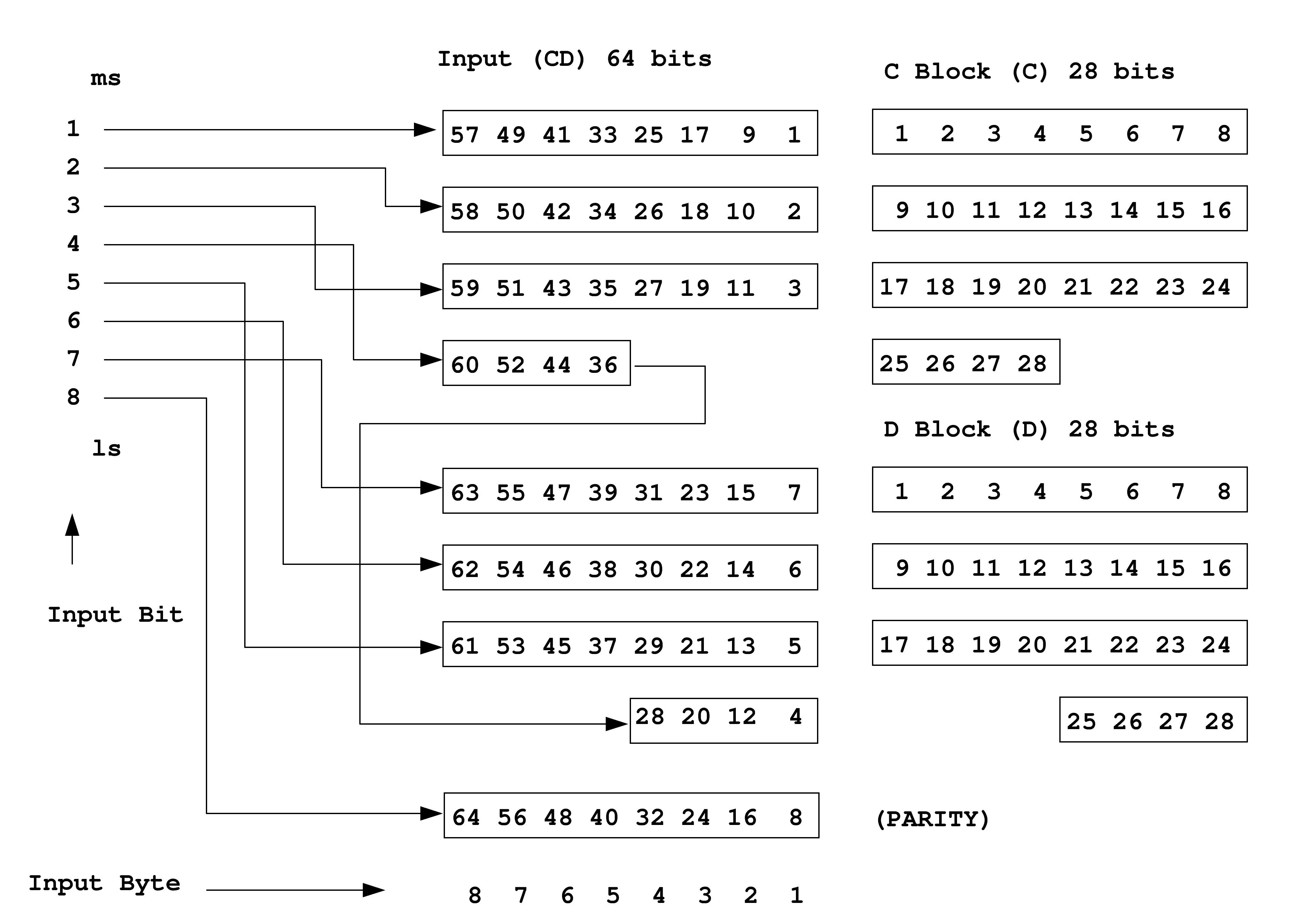 Where we again get 8 wires to describe the permutation using 7 input byte bits. The PC-1 table is re-aligned to an 8 successive input bytes here. Note that input byte bit 4 is shifted into the concatenated last 4 bits of both C and D blocks.

For your question on the initial permutation, "...where is the 58th bit to be found: in buffer[0] or in buffer[7]?" the answer would be buffer[7], corresponding to the 8th input byte in sequence assuming buffer is an array of char values.

3
How was PC2 designed?
2
64 DES full example with all the stages