But it depends on what you mean by good. If pretty lousy by modern standards is your idea of good enough, and you want to use it on your little brother, then this cipher may exceed expectations. Sorge's cipher was powerful in its day. However, it is not a one-time pad; that is, it never offered perfect security. The Sorge cipher is not a modern cipher, and almost no one would ever use it because it depends on the obfuscation of the key, and security by obfuscation is anathema to modern cryptography.

What is the Sorge Cipher?

In The Codebreakers (Macmillan, 1967, p. 650), David Kahn points out that the Sorge cipher was regarded as unbreakable, a triumph of cryptography. It was a mainstay of Soviet espionage during their days of stunning successes. Richard Sorge has been described as the best spy who ever lived, his work impeccable. No one that we know of ever broke it while it was being used. Kahn says, "it remained hermetically sealed against cryptanalysis."

It brought the old Nihilist substitution to a peak of perfection. It merged the straddling checkerboard with the one-time key.

The innovation of the Sorge cipher was to assign the highest-frequency letters of the English alphabet (yes, communications were in English) to single numerals in the straddling checkerboard. The phrase "a sin to er(r)" gives us the seven most commonly used English letters: A, E, I, N, O, R, S. Matching these to single digits helped flatten the distribution of letters and shorten the messages, which made radio transmission faster and thus safer.

The Sorge cipher's straddling checkerboard was not partly alphabetical, as seen in the example above. It was made with a keyword in such a way as to muddle the order of the letters.

Clausen [Sorge's radio operator] used SUBWAY. The encipherer wrote this out, followed by the rest of the alphabet in rows beneath it, with a full stop and a letter-number switch sign at the end. Then the digits 0 to 7 were assigned to ASINTOER as they occurred vertically in columns from left to right. Finally the two-digit groups from 80 to 99 were assigned to the remaining letters and symbols, also vertically: 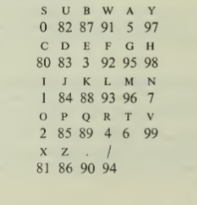 Which results in this checkerboard (Kahn, p. 651):

Which gives this fractionation to the plaintext (Where is 106 Division):

The key was chosen "randomly" in Moscow from a book about railroad construction in Luxembourg in 1931. Where one started in the tables of statistics had already been agreed upon. Non-carrying addition produced the ciphertext.

There are many obscure books. Every book on our planet has not been scanned yet. Would such a key provide "good" security? Probably not, and its strength is certainly nowhere near perfect or anything resembling the strength of modern encryption. This cipher method depends on obscurity, which is a critical mistake.

Not the answer you're looking for? Browse other questions tagged classical-cipher or ask your own question.

8
Is a book cipher provably secure?
23
What is the most secure hand cipher?
8
Toy cipher -- does it have a name?
5
Why does ROT13 provide no cryptographic security?
4
security of Felix cipher
2
Security of permutation cipher
2
Does the transposition cipher have a network application?
1
Does there exist a Cipher / Hash identification tool?
4
How was the 5 digit random number in the VIC cipher generated?
16
Which is the simplest cryptographic algorithm which is close to commercial-level security?