Why is it better to add and double points on an elliptic curve using projective space?

I have looked over many solutions of which only explain the addition of two points $P$ and $Q$ as the following:

We find the line between the points, find the point of intersection on the curve and finally reflect it over the x axis. 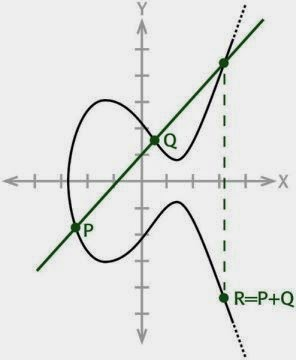 The textbook I have been given says that for adding two points P and Q we use the group operation $P\bigoplus Q=O*(P*Q)$ where $O$ is a "point at infinity" $[0,1,0].$ We first find the slope of the line between the points and then we plug it in to the following equations:

This textbook has confused me beyond belief.

To my understanding, a projective plane essentially is a plane that is parallel to another plane that lies flat on the x,y axis. This plane is perpendicular to the z axis (points satisfy $z=1$), it contains affine points of the original plane and the point at infinity $O$. If one were to construct a 3 dimensional line crossing the origin it would eventually pass through the coordinates $[x_z,y_z,z]$, so the point $(1,2)$ would be found on the projective curve as $[1,2,1]$.

Is there any specific reason why we want to express points of the elliptic curve in projective space? Does it make adding two points or doubling a point easier?How might I explain to someone why I chose to represent it using projective space if they were to ask me why not just use the algorithm shown in the picture?

Is there any specific reason why we want to express points of the elliptic curve in projective space? Does it make adding two points or doubling a point easier?

Because it is a lot more efficient.

If you take a look at the operations involved in performing an elliptic curve operation on a prime curve, they are:

It turns out that modular addition and subtraction is fast, modular multiplication is somewhat slower, and modular inverse is dreadfully slow.

And, if we do everything using affine coordinates, it turns out that we need to do a modular inversion for every point addition or doubling.

In contrast, if we do things using projective coordinates, it turns out that we don't need to compute any inverses at all (we do increase the number of modular additions and multiplications we need, however the time involved there is much less than doing a single modular inversion, and so it is a win).

Now, at the end, we'll need to convert back to affine coordinates; that involves a single modular inversion; however when we do a point multiplication, that means that we replaced several hundred modular inversions with just one - a definite win.