How to make a hypothesis test for a simple statistical test for a certain RNG?

I'm self-studying about hypothesis test in the context of RNGs. I'm building a hypothesis test from scratch. I'm taking the simplest statistical test I can think of: how many $1$s are there in the sequence sample? My null hypothesis is that the RNG is uniform, so I expect the average number of $1$s to be close to $n/2$, where $n$ is the size of the sample.

I believe (or I guess) the sample averages should follow a normal distribution. To implement the hypothesis test, I will have to know the variance, though.

What should I do here? Should I look at a good RNG and come up with a variance relative to my simple statistical test? This makes sense to me. A good RNG will likely present averages close to $n/2$, specially if $n$ is large. I could then empirically determine the variance this way.

The number of one bits in a sequence of iid Bernoulli trials won't be normal: it will be binomial. But you have the right intuition that, as the number of bits grows, the binomial distribution converges to a normal distribution—specifically, for fixed $p$, as $n \to \infty$, $$\operatorname{Binom}(n, p) \to \mathcal N\bigl(np, np(1 - p)\bigr),$$ or, more precisely and with less abuse of notation, if $X_n \sim \operatorname{Binom}(n, p)$, then $(X_n - np)/\sqrt{np(1 - p)} \to Z$ where $Z \sim \mathcal N(0, 1)$ is a standard normal. This is a standard theorem of probability theory, the de Moivre–Laplace theorem; see, e.g., Feller, Vol. I, Ch. VII, ‘The Normal Approximation to the Binomial Distribution’, for an introduction.

That said, once you have decided on your test statistic and cutoff for a prescribed false alarm rate (‘statistical significance’), your job is not done: you should also have alternative hypotheses for the bugs you might have in your software, or physical defects you might have in your hardware. For instance, will you detect deterministic alternating 0/1 bits?

The hypothesis test is valuable only insofar as it distinguishes plausible nonuniform distributions from uniform ones. After all, if all you want is a hypothesis test with statistical significance 0.05 like any good little psychology journal, you could ignore the data altogether, roll a d20, and raise an alarm if you rolled a 1.

If you just count bits and apply a test for goodness-of-fit in terms of the ratio of zeros to ones with significance level 0.05, and stop there, you've only made an entertaining way to implement a d20 in software.

Surprisingly, you've picked a toughie even though it is meant to be the simplest of the randomness tests. The easiest technique is the feely touchy approach in the ent test (explained here). You simply count them up and get a mean. The average of the means should be exactly 0.5 in the long run. See what you get and how you feel about it...

A longer technique is to say a bit generator is a coin tossing machine. You can then go to Wikipedia and look at Checking whether a coin is fair. You end up with a beta probability density function morphing into factorials, such as:- 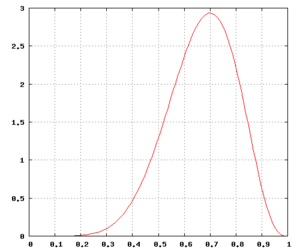 for getting 7 heads and 3 tails( read ones and zeros). That's all a lot more complex, but there is a worked example that will guide you to a numerical probability.

Another version is the official NIST Frequency (Monobits) Test of NIST 800-22, A Statistical Test Suite for Random and Pseudorandom Number Generators for Cryptographic Applications, Sections 2.1 & 3.1. They have both theory and a toy example.

It's not common to use $\sigma^2$ in randomness testing per se. Knowing that (for samples) $\sigma^2= 400 $ (one of my TRNGs) is more useful for entropy source health testing than general RNG verification. If you do get through to a p probability, it's typical to consider the hypothesis threshold as 0.01. Or NIST does any way.

Not the answer you're looking for? Browse other questions tagged random-number-generator pseudo-random-generator statistical-test or ask your own question.

5
Is any decent RNG acceptable as a stream cipher?
19
What stops the Multiply-With-Carry RNG from being a Cryptographically Secure PRNG?
5
Randomness test question from FIPS 140-1 and comparison with 140-2
2
Is the RC4 keystream random or not?
13
Estimated entropy per bit given P-value of a statistical test, and number of bits tested?
5
Is there are a metric based on collisions to compare bad hash functions?
1
Extracting Randomness from a Poisson Distribution