Why algorithmic symmetry is important in hardware implementation?

In AES, the encryption and decryption functions ordered in a symmetric way, I mean the same order of functions are used inside the round structure of both encryption and decryption (subbytes, shiftrows, mixcolumn, addroundkey) (see The Design of Rijndael List 3.8 page 49) but how does it actually make the algorithm better in hardware implementation?

Symmetry is something that is inherent in the design of SPN ciphers. It doesn't explicitly make the layout of the cipher smaller, but it definitely helps. You also see this in AES-NI where you can pipeline AES so each round is an instruction as you can just put latches on the boundaries. For Feistel Ciphers, or Simon at least, I just run the ciphers as asynchronous circuits because they do not integrate as well on a per-round into a traditionally synchronous processors (even if they are much smaller in layout).

In hardware, symmetry is generally desired so that your wires stick on the same layers. You have a stack of metal, and you generally run Metal 1 (M1) one direction and Metal 2 (M2) in the other direction. You just pick a direction for the data to "flow" On smaller processes with metal patterning, you find that you are forced in direction, also M1A and M1B need to go to M2 to make connections.

This "flow" is what helps AES implement nicer in hardware because of the nature of 8 in to 8 out bits of the S-Box and MixColumns.

The layout of an XOR in 14nm SOI looks like the following: 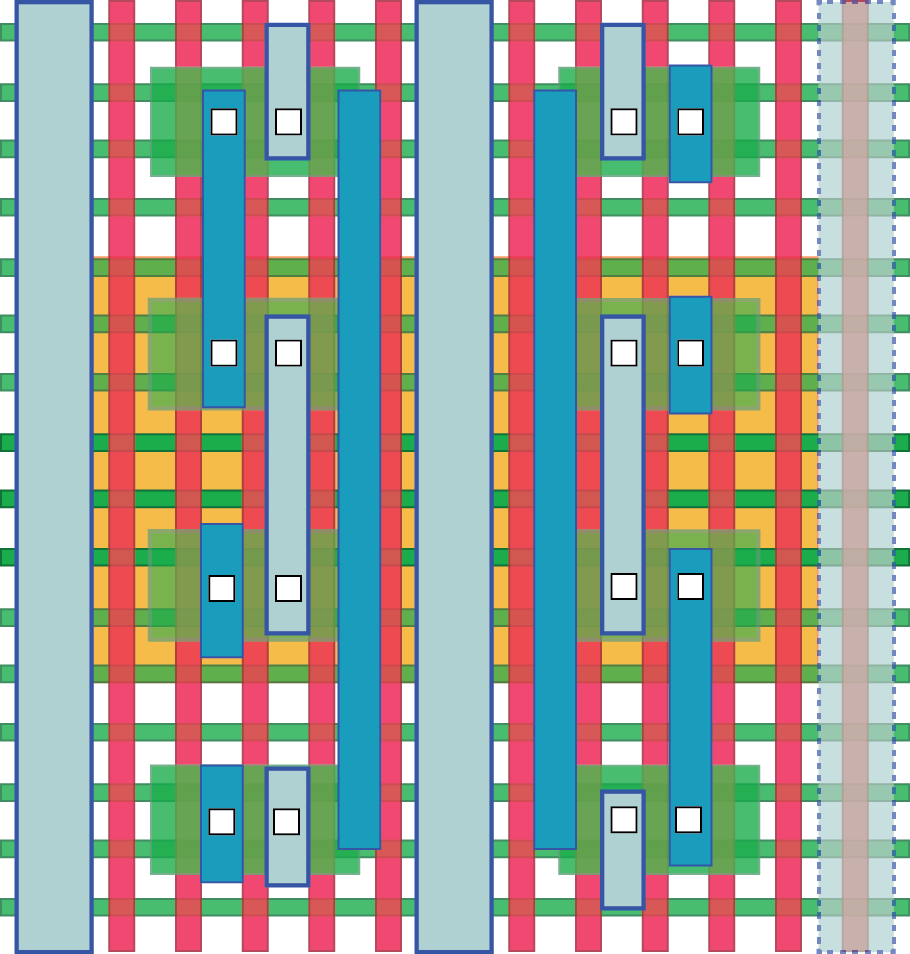 The two different colours of blue are the metal 1 lines for the tile (M1A is light blue, M1B is dark blue). I use this same layout for all of my cells, so I have the data flow from the top of the tile down. I interrupt the M1A lines to go to M2A, and M2B (they are thicker because of M3 via rules in case I go M1->M2->M3)

1
Using IV buffer after altered inside a Rijndael CBC Encryption/Decryption process as IV for next message?
2
Some questions about encrypting (AES) a file with password
5
Understanding the definition of HGD
5
Help with breaking AES reduced to 2 rounds
1
Reversible Decryption in Symmetric Key Algorithms
12
How do I detect a failed AES-256 decryption programmatically?
1
Proof that the cardinality of the cipher text set is greater than or equal to the cardinality of the plaintext set for a symmetric cryptosystem