What is TPMFail attack and what are the countermeasures?

Trusted Platform Module (TPM) is designed as a hardware-based root of trust to protect cryptographic keys even against system based adversaries.

Although Intel's firmware based fTPM has FIPS 140-2 and STMicroelectronics hardware-based TPM has Common Criteria EAL 4+ certifications, recently in an attack TPM-FAIL: TPM meets Timing and Lattice Attacks by Moghimi et al., They demonstrated that an attacker can recover server's private authentication key even by remotely.

In short, TPMFail attack is black-box timing analysis of TPM 2.0 devices deployed on computers. The TPMfail team is able to extract the private authentication key of TPMS's 256-bit private keys for ECDSA and ECSchnorr signatures, even over networks. This attack successful since there was secret dependent execution in TPMs that causes the timing attacks. To mitigate this attack, a firmware update needed for Intel fTPM and hardware replacement for STMicroelectronics TPM is needed.

How do the attacks work?

The attack is performed in three phases

On the below figure it is Intel fTPM's timing histogram. On the right a nonce depended software implementation. Comparing the figures leads to the information that Intel used a 4-bit fixed window during Fixed Window Scalar Multiplication.

In the left figure, there are 4 regions, the fastest one has nonces with 12 most significant windows are zero, next has 8, next has 4, and the slowest region has none.

They used The Hidden Number problem lattice attacks. They used BKZ algorithm over the Sage. This attack recovers ECDSA nonces and private keys as long as the nonces are short. Since nonces are selected randomly half of them have zero in MSB, a quarter of them have two zeroes in MSB, etc. The side-channel will help to select the shorter nonces to apply the lattice-based attack.

The key recovery with attack models 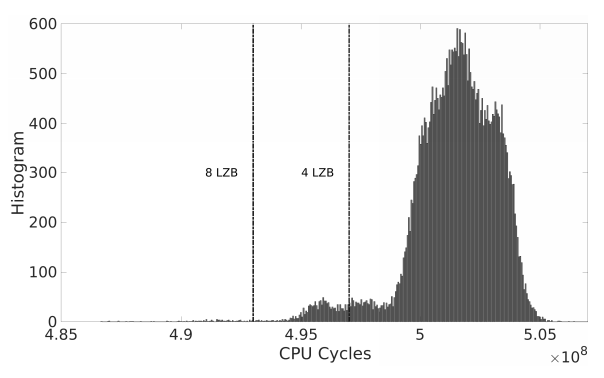 They used this remote attack against StrongSwang, an open-source IPsec VPN implementation that is supported by modern OSes, including Linux and Microsoft Windows.

What are the countermeasures.

TPMs have previously suffered from vulnerabilities due to weak key generation. However, It is widely believed that the execution of cryptographic algorithms is secure even against system adversaries.

*Thanks to commentors. See :Why EdDSA held up better than ECDSA against Minerva. Minerva is also a smilar work on smart cards.

TPM-Fail is a new demonstration of the well-known lattice-based attack of Howgrave-Graham and Smart on DLOG-based signature schemes such as Elgamal, Schnorr, and DSA that exploits partial information about per-signature secrets. TPM-Fail specifically applies the attack with timing side channels from the cryptogrpahy decelerators in TPMs. The attack had previously been applied to timing side channels in OpenSSL over the internet in 2011. A similar lattice-based attack called Minerva was just recently—days before TPM-Fail went public—reported on the same signature schemes in a collection of smart cards and cryptography libraries, apparently independently.

Here's a simplified presentation of how TPM-Fail works on Schnorr signatures, the simplest case.

Schnorr signatures. To make a Schnorr signature on a message $m$ with secret scalar $a$ in a group generated by a generator $G$ of order $n$, the signer picks a per-signature secret $k \in \mathbb Z/n\mathbb Z$ uniformly at random, computes

The crux of the attack is that the time taken by this computation on the target devices depends on the position of the most significant bit in the per-signature secret $k$—which turns out to be enough information to recover the long-term secret scalar $a$ after a modest number of signatures!

for some $x_2, \dotsc, x_d$. We can then view the linear system as the matrix equation

The matrix $A$ serves as a basis generating the lattice $\{x A \in \mathbb Z^d : x \in \mathbb Z^d\}$. Because we selected the $k_i$ to have shorter than usual bit-lengths by the timing side channel, we can conclude that the distance of the lattice vector $x A$ from the vector $v$ is bounded by what would be an improbably small bound for a uniform random system:

With any of various lattice algorithms like Babai's to approximate solutions to the closest vector problem, we can use $A$ and $v$ find a candidate vector $w$ on the lattice but close to $v$. With any luck—because there are unlikely to be very many lattice vectors this close to $v$—$w$ will be exactly the $x A$ we seek, so we can read off the $k_i$ from $w - t$ and recover $a \equiv h_1^{-1} (k_1 - s_1) \pmod n$.

The cost, of course, grows rapidly with $d$, and the success probability depends on $d$ and on how much smaller the bit-lengths $b$ are than $\lceil\lg n\rceil$; Howgrave-Graham and Smart originally applied it to any knowledge of the top 8 bits of 160-bit signatures with 30 signatures, but were unable to apply it to only the top 4 bits of any number of signatures they tried. TPMFail and Minerva extended the number of signatures into the thousands.

There are many more practical details worked out in the TPM-Fail and Minerva attacks:

Not the answer you're looking for? Browse other questions tagged dsa side-channel-attack schnorr-signature tpm or ask your own question.

7
How to avoid side channel attacks when handling large numbers?
3
Does a cryptographic oracle have to be a server?
4
Synthetic Jitter to Combat Timing Attacks
1
Is it theoretically possible to create an unbreakable cipher?
1
DSA - can $k$ be 1?
1
How to pick up random number within range using pseudo-random number sequence

2
Which platforms are most vulnerable to Simple Power Analyse Attack
2
Sane implementations of Bitcoin cryptography routines w.r.t. side-channel attacks
8
Are there any symptoms of a side channel attack on the target chip?
4
What are the fastest attacks on ECDLP?
7
What quality of randomness is needed for randomized side channel countermeasures?
0
Stream slicing operation in block cipher and side-channel attack
1
Side channel attack - execution time depends on the size of the key
5
What is the Lord of the Ring(s): Side Channel Attack and What are the results
2
What is reaction attack?