Is there a method to encrypt relations in between values of a cyclic value set and generate values out of this set with pseudo RNG? (all at user PC)

All this is computed at the users PC. He has access to all variables. Given two random values genereated by the RNG the user should not know how to compute the second out of the first (= how often $f$ need to be applied).

Question: Is there any cryptographic method which has such conditions?

$\bullet$ There need to be an efficient way to (pseudo) randomly generate values $v_0$ (*not all values in $S$ need to be generated by the RNG but at least $N^{2/3}$)
$\bullet$ (*The RNG dont need to be uniform distributed among those $N$ values (but it can). It's fine if no probability of one value is much higher than 1000 times than any of a subset containing 80% of all values.)

$\bullet$Using unknown methods:
A random cyclic permutation (with cycle size N) with function $f$ which generates the next value in that cycle and the RNG could be a random number between 1 and $N$.

$\bullet$Too easy to compute:
The discrete logarithm in $\mathbb{Z}/N\mathbb{Z}$ with prime $N$ and a primitive root $g$ as generator with $f(v)=v⋅g$. The RNG would just give a random value between $1$ and $N−1$. If now the user gets two such random values he does not know how to compute one out of the other (how often multiply with $g$) even if he knows all internal variables. But it can be solved in about $O(\sqrt{N})$ steps. For small numbers that would be too fast to compute. I'm looking for something similar but with $O(N)$ (or bigger). 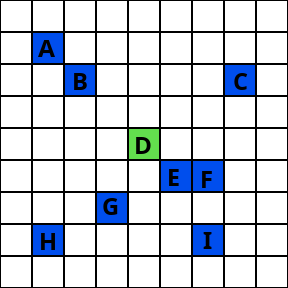 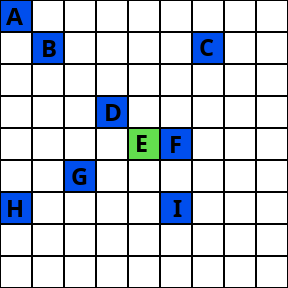 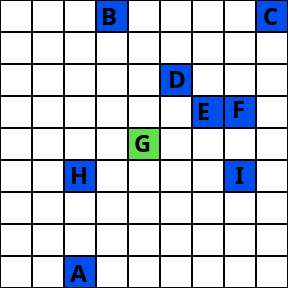 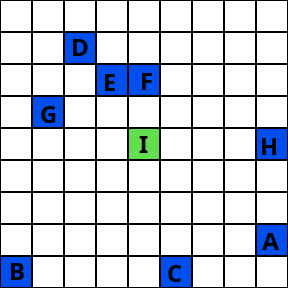 This can lead to multiple values at same position but values which are close in cycle also share almost equal other values. Values at the other end of the cycle still share more than half of the values. This property is not needed, equal values all the time would be better.

If now given only two random values e.g. D and G it should be as hard as possible to derive the position of G starting at D.

Besides the 'next' function $f$ also the inverse can exists. Except just a single function also a function for each dimension can exists. If that's the case only the adjacent square gets computed. It need to be independent of the order of function execution and there should exist no (easy) way to reduce a given value to its dimension values. Else finding the way between two random values would be too easy.

If evaluating $f$ uses computer time $t$, a brute force attack takes on average time $Nt/2$. To have this larger than $T=36\cdot10^6$ seconds, with $N\approx10^{12}$, we need $t>72\cdot10^{-6}$, that is some hundred thousands CPU instructions. Artificialy slowing down the implementation of $f$ in the program won't help. $f$ must be inherently slow so that it is slow for the attacker; and controllably slow so that we can tune the compromize between security and speed of the user program.

I aim only at a reduced version of the security requirement: Given two random values produced by the RNG, a guess of the number of steps of $f$ to go from one to the other, if made with much less than $T$ seconds of compute time, has low probability to be exact. Towards that:

Note: there are time/memory trade-offs possible for evaluation of $c$ faster than the trivial:

and the program should use these, in order to increase $\alpha$ inasmuch as functionally tolerable, maximizing the cost of a brute force attack.

6
Random Number Generation with a Entropy pool versus Seed
6
help with cryptanalysis of a sponge permutation
2
Leaking information when a value is blinded
4
Any speed up methods for finding the index of a random value produced by the Inversive congruential generator?