Why is a prime number used in ECDSA?

So I need to write a piece for school about ECDSA and how it is secure. Now I thought I had a simple question, however, I can't seem to find an answer anywhere:

Why does the p in the formula need to be a prime number?

Now I understand how you can only have modular inverses of prime numbers, and I thought maybe that had something to do with it, but I can't see how though.

This is the site where I found the formula from the ECDSA algorithm: https://andrea.corbellini.name/2015/05/23/elliptic-curve-cryptography-finite-fields-and-discrete-logarithms/ 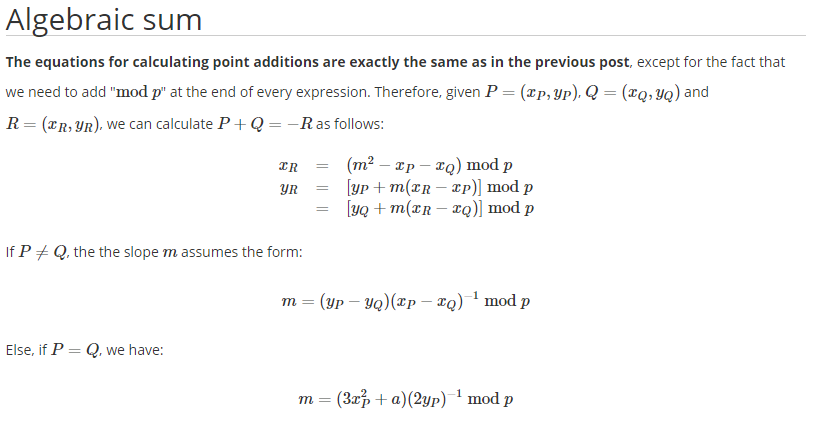 Why does $p$ need to be a prime number?

That's necessary for arithmetic modulo $p$ to be a field. For non-prime modulo, we only get a ring.

That's important because we want to compute modular multiplicative inverses, and need a field for that to work consistently.

you can only have modular inverses of prime numbers

More precisely: all integers from $1$ to one less than the modulus have a multiplicative modular inverse if and only if the modulus is prime.

Note: for different (security) reasons, the number $n$ of points on the curve (including the neutral, also known as the point at infinity) needs to be a prime too (as it is in ECDSA), or at least to have a large prime factor.

Not the answer you're looking for? Browse other questions tagged elliptic-curves dsa prime-numbers or ask your own question.