I've started looking into differential privacy from scratch following "The Algorithmic Foundations of Differential Privacy" by Dwork and Roth (freely available online). The mathematical notation is however somewhat confusing. On page 16, they define Probability simplex and Randomized algorithm as: 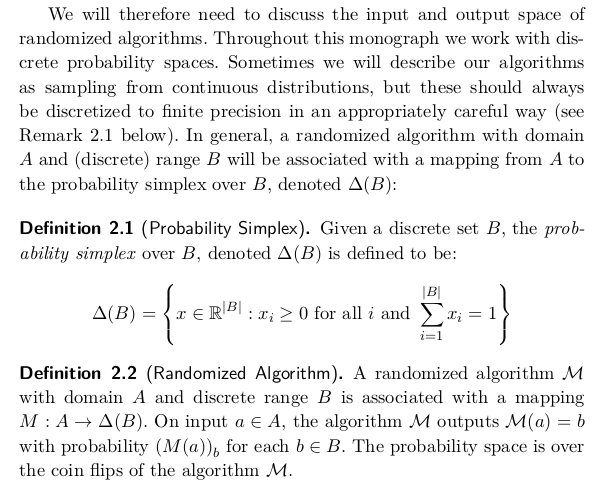 Is it correct that $\Delta(B)$ is a simple categorical probability distribution over $B$? Or is is something else?

A randomized algorithm $\mathcal{M}$ with domain $A$ and discrete range $B$ is associated with a mapping $M : A \rightarrow \Delta(B)$

This notation is confusing: $(M (a))_b$ - why they index with lower-cased $b$ and what does it mean?

The probability space is over the coin flips of the algorithm $\mathcal{M}$.

Flipping a coin sounds funny in a formal definition (why not simply say "a Bernoulli distribution with $\theta = 0.5$"?). Nevertheless, the last sentence doesn't make much sense to me: what is "the probability space"?

I've looked up several other sources but they use different notation and don't even bother with these "first principles". So any explanation is much welcome.

I had the same problem when I was understanding this because it's not so intuitive. I will answer here in case future people had the same trouble.

I made an example to stabilize these definitions:

Not the answer you're looking for? Browse other questions tagged differential-privacy or ask your own question.