I was reading this paper about elliptic curves and I saw this graphic: 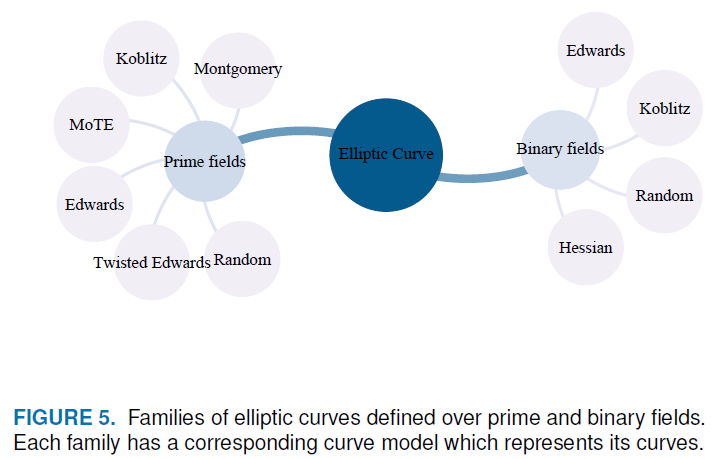 This paper is pretty new (november 2018) and I was wondering, whether these are all known ecc-families or not. The key point is, that I don't see Weierstraß curves. Can someone explain to me, why Weierstraß-Curves are not included? Are there other curve-families that are not included. If true, which?

There is an infinite number of elliptic curves, but a small number that is used in elliptic curve cryptography (ECC), and these special curves have names. Apparently there are no hard and fast rules for how the names are chosen, but there are patterns. IETF has published a report on the list of alternate elliptic curve representations recently. You can refer to the IETF report here. Following are some of the reference elliptic curve families. A few of them are missing in the diagram.

Elliptic Curves were originally written in Weierstrass form. Edwards elliptic curves have their own advantages: addition, doubling and tripling can be done faster on Edwards curves than on curves given by a Weierstrass equation. This is because the addition law on Edwards curves does not have exceptions, while the addition on Weierstrass curves distinguishes several special cases. The Montgomery curve is suggested for application in elliptic curve cryptography because arithmetic in this curve representation is faster and needs less memory than arithmetic in standard Weierstrass form.

Please find an insightful article on the names of some the prominent elliptic curves used in cryptography.