Some questions on building permutations from boolean functions

I've seen multiple examples of boolean functions being used as a permutation. 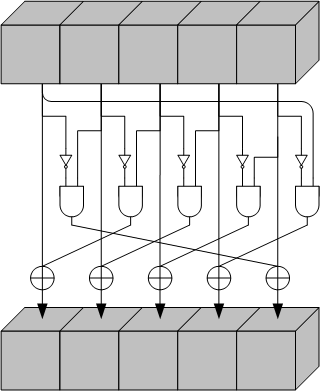 The first question would be, what is the rationale (or proof) why this is a permutation?

The second, related one: What are the properties, the boolean function has to satisfy that it results in a permutation?

And now regarding the inverse of such a permutation.

Are there any generic methods/algorithms to find the inverse of such a construction?

Also, what are the major contributing factors for the complexity of the inverse (number of variables, algebraic degree etc.)?

The general algebraic question is multifaceted and can be quite complicated. Some depend on vector space, some on extension field properties.

As mentioned in the comments checking the property can be simpler.

Nyberg’s articles mentioned there are

both easily locatable on google scholar.

I will use $a_i$ as input and $A_i$ as output variables as in the edited question.

Note that the sets $J_i,J_j$ where $J_i=\{i,i+2\}$ are disjoint except when $j=i+2$ or $i=j+2.$ So there is no ambiguity for determining the inverse unless we are in this special case, thus the inverse exists except in this special case. But even in this case the patterns $(a_i,a_{i+2},a_{i+4})$ which result in bitflips are unambiguous.

So a unique inverse mapping exists.

The $\chi$ function is defined and analyzed in Joan Daemen Ph.D. Thesis

Chapter 6: Shift-Invariant Transformations (SIT) is where the theory is mentioned. I'll provide a glimpse of it (lots of definitions and results).

The properties of SIT that make them useful;

SITs are very related to finite cellular automata which focus on long-term structure and pattern over time this work concentrate on the short term aspects of invertibility and local propagation and correlation properties.

Definition 6.1: A transformation $\phi: \mathcal{A} \to \mathcal{A}$ is shift-invariant if

Then it defined the local maps where the image only depends on some of the inputs.

Where $\nu$ defines the neighborhood, see 6.3 Local Maps. This theorem doesn't provide a construction of the inverse explicitly.

Section 6.6 Nonlinear transformations with finite $\nu$ is where the action is started.

Here the local map is specified by a set of patterns, called the complementing landscapes (CL). The value of a component is complemented if its neighborhood takes on one of these patterns. A landscape is a pattern consisting of symbols $1, 0$, and $\textbf{-}$ denoting “don’t care,” positioned relative to an origin, denoted by $∗$. In this context, the all-zero state will be denoted by $0^*$ and the all-one state by $1^*$.

The inverse of $\chi$ is talked in local and global invertibility sections that require a deeper in theory. A nice read to learn if you want.

So, As I said in the comments, either one can look for all possible permutations to see the desired property, or look in the theory as Daemen, did. They used this theory years later in the Sponge construction where $\chi$ is the only non-linear part of the SHA-3.

As my first question has been answered in detail in the answers of kodlu and kelalaka, I wanted to share the results I gathered on my second question since posting:

What are the properties, the boolean function has to satisfy that it results in a permutation?

During lots of additional reading I discovered, that this seems to be a well (but not widely) known property. For example stated and proven in Vectorial Boolean Functions for Cryptography chapter 2.3.1 as Proposition 2:

with the additional fact from chapter 2.3:

So, an (n, n)-function is a permutation, if and only if it is balanced according to the above definition.

By the way, this property is also stated, less obviously, in Cipher and Hash Function Design Strategies based on linear and differential cryptanalysis, 1995 Theorem 5.1

This also means, checking this property for the general case for larger functions, e.g. 64bit wide (n=64), is not feasible as it would require checking balancedness for 2^64 - 1 different combinations (for 2^64 possible inputs each). So some tricks or shortcuts will likely be required.

Not the answer you're looking for? Browse other questions tagged group-theory permutation keccak or ask your own question.

5
Get permutations from password
1
Permutations coming from RSA
4
What is the expected number of different sequences of bits in the collection that contains $2^{800}$ elements?
3
Practical OWP of the set of $k$-bit bitstrings for low $k$
5
Using Keccak permutation as a block cipher
2
Implementation details of the π step of the Keccak round function
1
Simplifying the description of the Keccak padding rules
1
Permutation of first $k$ prime powers as a one-way function?