So the min-entropy estimation for the source that produced random.dat is 7.88 bits of information per byte.

However, this page calls it USELESS. I'm unable to reproduce the claims made this page --- none of my NIST SP 800-90B programs show even similar output as those displayed by this page. The output above is an example. Am I running a totally different version of the programs?

As the author of that page I feel that some clarification is necessary:-

Am I running a totally different version of the programs?

Yes. You're running the IID test. You need to run ea_non_iid. What you've run assumes that the data sample is IID within a p=0.01 certainty. It then calculates the min. entropy of the dataset using the maximum probability ($H_\infty$). That's easy.

ea_non_iid attempts to measure $H_\infty$ of correlated data. That's hard. The reason 90B is pretty useless (and never used) is that code assumes uniformly distributed data. Well to be honest, no one really knows what the authors were thinking. [Insert appropriate conspiracy theory, but I draw your attention to Federal Information Security Modernization Act (FISMA) of 2014, 44 U.S.C. § 3551 et seq., which is referenced on page 3 of 90B].

Other than a few laboratory binary entropy sources, most generate some form of non uniform distribution. You can get really weird ones depending on how the source is sampled and packed into bytes. That site has examples, and this is another one from a current project's source:- 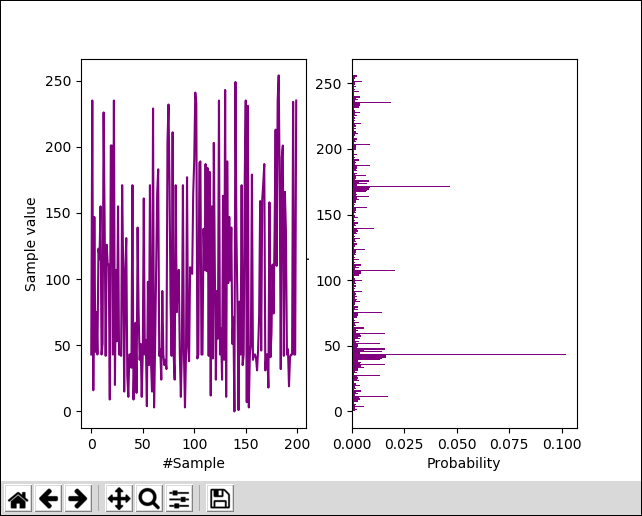 The site also says to not trust anything on that site. Do your own research and have a look at:-

This is an extract:- 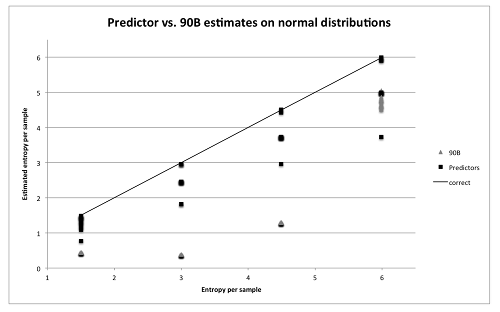 You can see that in some cases $H_\infty$ is underestimated sixfold. Their various predictors are not very good. From experience and research I trust the LZ78Y compression predictor the most, but still. This is consistent with my own testing as shown.

John Kelsey is one of the 90B authors and so he criticises himself!

The page says right near the top:

The NIST SP 800-90B tests+ only apply (and only when they’re behaving) to uniformly distributed data sets. The kind that you hardly ever get sampling real world, physical entropy sources.

Uniformly distributed, in the context of bit sequences, means behavior like an idealized coin toss:

This is indeed the flavor of randomness that most cryptographic software expects to be given. The entropy of such a uniform random bit string is equal to its length—i.e., it gives you the maximum entropy possible for its size.

But physical noise sources tend to be normally distributed, or as more popularly known, "bell curves" where there is a mean value that the likeliest, 68% fall within one standard deviation of the mean, and so on. The page you link is in a site about a physical device to produce random noise that evidently makes no claim that its output is uniformly distributed. So indeed, tests for uniform distribution would not be proper for evaluating the entropy of its output.

Note that in practice, to use such a non-uniform device in a cryptographic typical application, some sort of conditioning or randomness extraction would be performed to synthesize its raw output into processed output indistinguishable from uniform randomness. This might well happen implicitly if you, for example, use its output to feed an operating system random generator entropy pool.

So I'd say that this page's labeling of the SP-800-90B tests as "useless" is hyperbolic and unhelpful. It really just means that they're not designed to evaluate non-uniform random noise sources, but says it in a way that is likely to mislead people to think that the tests are somehow flawed.

6
NIST 800-90B /Non-IID track - min-entropy result > 8 for 8-bit symbol
4
Use of scrambler LFSR for randomness extraction of semi-random source
1
What adequate tools are available for estimating entropy?
2
How much randomness to reasonably "launder" a compromised TRNG?