How can we prove that no DES key makes encryption the identity function?

That proposition is false for 2DES (EE), even restricted to one key, because twice applying encryption with the all-zero key (and the Final Swap built into the Final Permutation) yields identity.

For the same reason, the proposition would be enough to prove that DES is not closed under function composition, hence not a group [but Keith W. Campbell and Michael J. Wiener's DES is not a group in proceedings of Crypto 1992 (free access) also proves other facts. See a more extended bibliography there].

Variants of the question:

Inspired by this question.

Update: towards a solution, I have thought of

Update2: the brute force approach might have been carried as early as 1999, when:

The EFF DES cracker first solved a challenge posed more than a year ago by world-renowned cryptographer and AT&T; Labs research scientist, Matt Blaze. The "Blaze Challenge" was designed to only be solvable by "brute force" cryptanalysis of DES. Mr. Blaze challenged the world to find matching pairs of plaintext and ciphertext numbers, consisting of nothing but repeated digits. Blaze himself was unaware of any such pairs until the EFF DES Cracker revealed the first known pair. It found that a hexadecimal key of 0E 32 92 32 EA 6D 0D 73 turns a plaintext of 8787878787878787 into the ciphertext 0000000000000000.

That's nearly enough to prove the question's proposition. What's missing is that the key found is the only solution of the Blaze challenge with all-zero ciphertext, or making an exhaustive list of those that do and ruling each out from being counterexample to the proposition.

To throw something, here are simple proofs for 2-4 rounds, applicable to almost any Feistel Network. Some notation: $F_i$ denotes $i$-th Feistel round without swaps, $f_i$ denotes the Feistel function at $i$-th round, $S$ denotes the swap.

Since the initial permutation IP and the final permutation FP are inverses of each other, we can strip them away: for any bijection $P$: $$P^{-1} \circ G \circ P = Id ~~~\Leftrightarrow~~~ G = Id.$$ We will use this trick later. 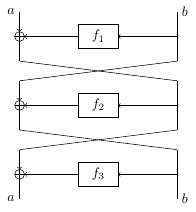 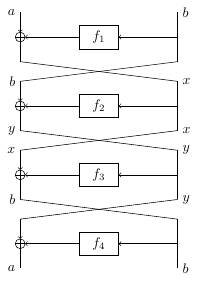