How secure is the encryption with OTP and an OneRNG?

I bought an HWRND last week. What do you think, how secure is the encryption with that and the OTP? (http://www.moonbaseotago.com/onerng/theory.html).

I suggest not very. And unfortunately that's a combination of user error (sorry) and poor analysis from the OneRNG project.

The use case for OneRNG is this:- 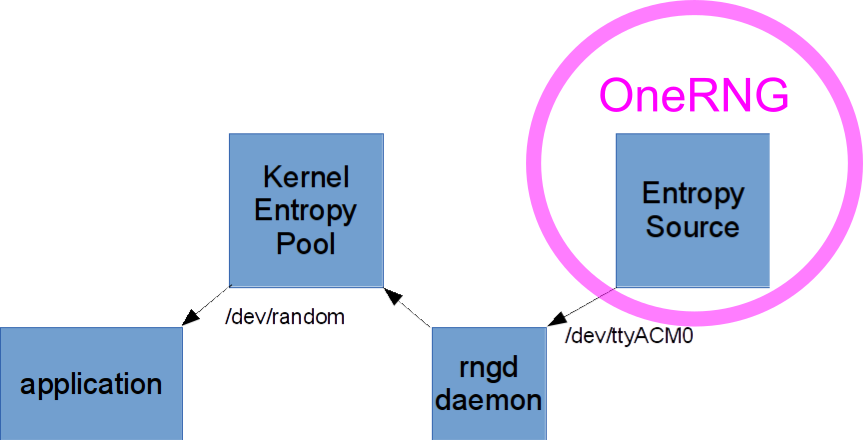 The device has been analysed solely as an entropy source, and not a fully fledged TRNG. So it is intended to be used to 'top up' Linux's entropy pool via the rngd daemon. Directly from the site:-

Remember we are not trying to make, nor claim to produce, crytptographically perfect random numbers, our goal is to produce entropy for seeding system RNGs such as the one in the linux kernel's /dev/random.

So that kinda works in theory, but:-

At what rate does OneRNG top up? There is no pertinent cryptographic analysis of the entropy stream from the device operating in cmd1 0 0 1 Raw avalanche noise mode. We can't tell if avalanche has been achieved as there is no probability mass function of the raw samples. We do know that this mode has failed ent, and ent displays the wrong type of entropy by default (not $H_{\infty}$) anyway. Not catastrophic, but $H_{\infty}$ is needed, not Shannon's version of it.

Just using CRC-16 as a whitener over raw samples creates a pseudo random number generator with an indeterminate internal entropy rate. NIST's 800-90b restart test would be appropriate here as the cyclic redundancy check starts off from predetermined initialisation values.

If you want to use a true OTP for complete secrecy like your life depended on it, this is not an appropriate device as it's not a TRNG.

Personal bug bear:- If you're going to sell TRNGs, get an oscilloscope.

Not the answer you're looking for? Browse other questions tagged encryption one-time-pad file-encryption or ask your own question.

1
How to decode an OTP message?
7
Is there a companion algorithm for OTP to ensure integrity and/or authentication?
5
Is there a practical security difference between OTP with letters and OTP with numbers?
3
How vulnerable is one-time pad (OTP) encryption, if the OTP is used twice, with a random substitution scheme
0
CPA on theoretical OTP with CBC mode
0
Using the OTP and RSA compared to only using the OTP itself
4
When does multiple OTP encryption become insecure if new keys are permuted? ​
2
OTP with fixed plaintext
1
Why use an OTP if you already have a secure channel
1
Stream cipher vs OTP, with /dev/urandom and secure key exchange