Enigma ring settings - is the relative location of the turnover all that matters?

I understand that the ring setting of an Enigma rotor changes the alignment between the internal wiring and the letters on the ring. For example, in the diagram below, rotor I has ring setting 2 (B), which causes current entering at position A (the center) to flow through the wiring from Z to J (internal positions) which corresponds to A -> K based on the visible indices on the rotor.

However, we could achieve the same result with ring setting 1 by using Z as the top character, which would cause current to flow from Z->J (internal positions) corresponding to Z->J on the visible indices.

This leads me to believe that the only real impact the ring setting has on the encryption is that it changes the location of the notch (that steps the next rotor) relative to the internal wiring. For plain texts that are long enough to step at least one rotor this will result in a substitution that cannot be recovered by permuting the rotor starting positions alone.

Is there anything else I'm missing? 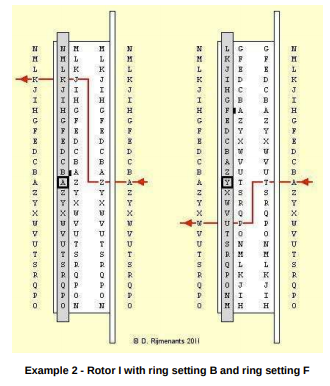 Cryptanalytically the effect is that if the message indicator or "window position" of the machine is known but the Ringstellug is not, then nothing is revealed about the "wheel position" or "rod position" as it was referred to at Bletchley Park. There were instances when such information was known, but it was not always easy to bring to bear on the cryptanalysis. A notable exception was the Herivelismus exploitation of human error that noted that common message indicators were often correlated with Ringstellung settings. This was a very useful step in separating out one part of Enigma settings and solving for it separately early on in the war.

Not the answer you're looking for? Browse other questions tagged substitution-cipher enigma or ask your own question.

4
Could the Enigma algorithm be classified as a Feistel network?
8
How does the ring settings of enigma change wiring tables?
2
How exactly is an enigma simulation software supposed to encrypt alphabets?
3
Is it right that the Bomba can halt, but give you a different settings other than the one Germans really used for encryption using an Enigma?
2
What's different between ground setting and ring set in the Enigma machine?
4
Why are the indicator drums of a Bombe machine labelled from A to Z clockwise?
0
Is my Enigma inspired cipher any good?
3
Enigma machine Encryption steps