Differences between Extractors and Privacy Amplification for Quantum Random Generators 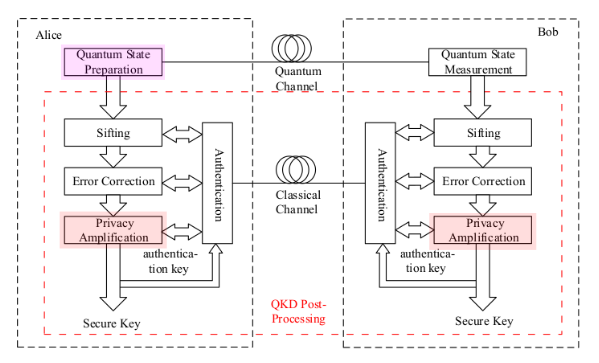 Essentially privacy amplification (pink bits above) in QKDNs aims to allow two parties, Alice and Bob, to distil a secure final key from a partially secure bit string. The degree of security (bits) is governed by the Leftover Hash Lemma (LHL), which also can be applied to simple random number generation for regulating the output bias.

The purple rectangle is where true random numbers are generated within a QKDN. Clearly within a QRNG that would be the end of the story. A randomness extractor may or may not be incorporated into the output stage of the QRNG as they're not always needed. If you did need a randomness extractor, they're used to alter the probability mass function of the quantized signal into an almost perfectly uniform distribution.

6
Long-term data protection, storage of old encrypted traffic and quantum cryptocalipse
6
Formal relationship between encryption and random number generators?
4
Small Quantum Signatures - Reality check needed
2
Best way to use a block Cipher as RNG
7
Differences between methods of hardware random number generators
2
If we don't trust current PQ algorithms enough to use them on their own why should we trust them for a hybrid?
1
Dieharder How can I make my input file suitable for Dieharder?