Must a line hitting two points on the elliptic curve over a finite field hit another point by continuation?

The Arstechnica article title as "A (relatively easy to understand) primer on elliptic curve cryptography" claims this;

In fact, you can still play the billiards game on this curve and dot points together. The equation for a line on the curve still has the same properties. Moreover, the dot operation can be efficiently computed. You can visualize the line between two points as a line that wraps around at the borders until it hits a point. It's like, in our bizarro billiards game, when a ball hits the edge of the board (the max) and then is magically transported to the opposite side of the table and continues on its path until reaching a point, kind of like the game

and provides an animation (It is a GIF see on the page, can't link here).

And I've made a similar test that achieved the same; 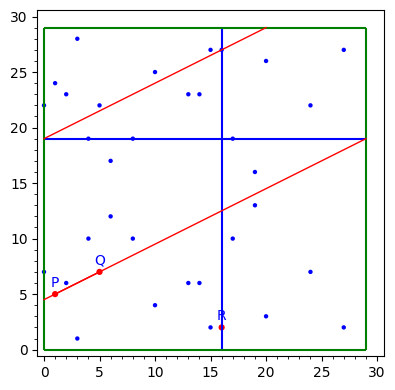 I've followed the same step, draw a line passing through $P$ and $Q$, and continue from the opposite edge when an edge is hit!

The green lines are the borders+1 of the possible elements, the blue lines have used for (visual) check the continuation.

If the claim on the Arstechnica is theoretically correct then what is the theory? 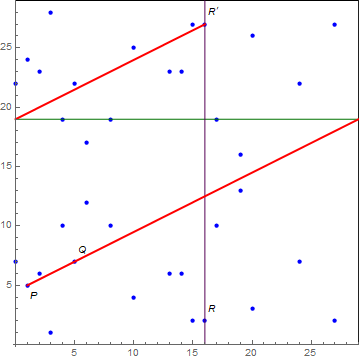 After drawing the red line for a displacement of $d$ along the $x$ axis starting from $P$, and accounting for the wraparound on the sides, the pen drawing the red line has coordinates $\begin{align}x&=(x_P+d)&\bmod p\tag{3}\label{fgr3}\\ y&=\left(y_P+d\,\frac{y_Q-y_P}{x_Q-x_P}\right)&\bmod p\tag{4}\label{fgr4} \end{align}$ with the computations in $\mathbb R$. Justification: What's on the left of the $\bmod$ operator³ in $\eqref{fgr3}$ and $\eqref{fgr4}$ is the position of the pen having moven by $d$ along the $x$ axis if we did not wraparound on black edges. The $\bmod$ operators capture the effects of the wraparound.

The points on the red line with both coordinates an integer (including but not limited to any point of the curve) thus have a corresponding $d$ an integer, and verify $(y-y_P)(x_Q-x_P)\equiv(x-x_P)(y_Q-y_P)\pmod p\tag{5}\label{fgr5}$ And any $(x,y)$ matching this equation would be on the red line if we kept drawing it indefinitely; $P$ would be reached when $d=p\,(x_Q-x_P)$ (or earlier).

It follows that our graphical search procedure for $R'$ hits a point of the curve (and thus terminates), and yields a point $R'$ which coordinates $(x,y)$ involves integers that verify $\eqref{fgr1}$ and $\eqref{fgr5}$. But we have not shown yet that $R$ obtained from $R'$ is the expected point (we have not ruled out that $R'=P$ or some other unwanted point of the curve).

An intuitive argument is that when we remove the $\bmod p$ from equations, and work in the field $\mathbb R$ instead of $\mathbb F_p$, $\eqref{fgr5}$ becomes the equation of the line going thru $P$ and $Q$ in the Euclidean plane (with coordinates in $\mathbb R$). Our graphical procedure that draws the red line and finds a third point on the curve that the line intersects is thus a mere translation⁴ in field $\mathbb F_p$ of the graphical construction of point addition on the curve with the same equation in the field $\mathbb R$, and must thus "work", in the sense of yielding a commutative group law on the set of curve points and neutral.

Proof sketch, which mostly⁴ parallels a possible demonstration of the point addition formulas for the same equation in the field $\mathbb R$:

¹ This special case subdivides into

⁴ The only operational difference is that for the Elliptic Curve in the field $\mathbb R$ we must draw the red line in both directions, when that's optional here because we're in a finite set and the line ultimately wraparounds back to $P$.

An elliptic curve has degree 3. A line has degree 1. No curve contains an irreducible component of the other. (Each curve is actually irreducible and has only one component.) Bezout's theorem says the number of intersections of the 2 curves, counting multiplicities, is the product their degrees, which is 3.