Is a PBKDF2-derived master key easier cracked if very many Data Protection Keys are derived from it?

Here is Figure 3 from this document: 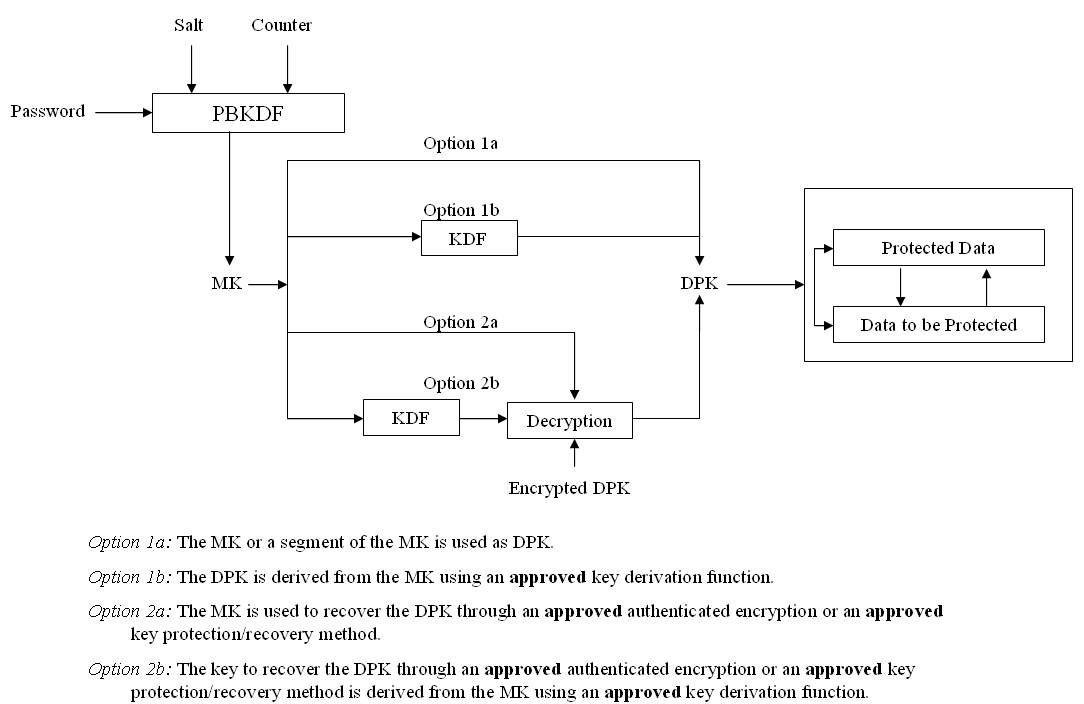 I am using the Option 1b: Generate Master Key (MK) first, and the get Data Protection Key(DPK) for file encryption.

I have 3 questions about this scheme:

Answering your three questions in order:

"If I have a lot (more than $2^{32}$) of files to be encrypted, each file is encrypted using newly generated DPK. Will it somehow cause the MK to be easily found? or easier to find?"

It's not going to make it harder. But no, as long as the KDF you're using lives up to its security claims, in practice it should not be feasible to construct the master key from the derived keys even if you have a lot of them.

If you want to be sure, check the standards and/or white papers defining your KDF and see if the security claims come with any restrictions like "assuming that at most $2^{64}$ bits of key material are derived from a single master key".

"The document does not specify which KDF to be used when generating DPK. Can I use back the PBKDF2 again?"

In practice, yes, you could use PBKDF2 also for the second-stage KDF. Since your input has already been key-stretched by the first application of PBKDF2, I'd suggest using an iteration count of 1 for the second stage to improve performance. In fact, I'd recommend doing this whenever you want to derive more than one hash output block's worth of key material using PBKDF2, since it reduces the attacker's work advantage.

As for PBKDF2, I'm not quite sure whether it should be counted as an "approved KDF" for this purpose or not. Certainly it has been approved by NIST for password-based key derivation, and one could (and I certainly would) argue that key-based key derivation is merely a subset of that, but I'm not sure if that argument is actually explicitly supported by any official NIST publication. In particular, I'm not sure if the use of PBKDF2 with an iteration count of 1 as a KBKDF is really sanctioned by any NIST publication.

In any case, HKDF isn't too different from PBKDF2 (they're both based on HMAC), and should be a simple and safe choice for a second-stage KDF.

"Should I generate new random salt for each DPK? Or should I use something related (timestamp or file name) for the salt?"

The important requirement for the salt is that it should be globally unique. A sufficiently long random string (at least 128 bits, preferably 256) is certainly one way to satisfy that requirement, but there are other options too.

For example, in the KDFs described in SP 800-108, the "salt" is, in effect, specified as the concatenation of two strings, Label and Context (separated by a null byte), defined as:

"3) Label – A string that identifies the purpose for the derived keying material, which is encoded as a binary string. The encoding method for the Label is defined in a larger context, for example, in the protocol that uses a KDF.

"salt: optional salt value (a non-secret random value); if not provided, it is set to a string of HashLen zeros."

"info: optional context and application specific information (can be a zero-length string)"

The "info" string, however, is part of the second (expansion) stage, and can, among other things, be used to allow several different keys to be derived from the same compressed master key (PRK in the HKDF terminology). For example, in your use case the "info" string could consist of a file number / name, a user ID and perhaps an application ID, plus whatever other information might be relevant. The important part is that it should be globally unique for each DPK.

5
Entropy Loss of KDFs
2
Deriving 256-bit key from PBKDF2-SHA1
2
AES GCM encryption, authentication and PBKDF2
4
Encrypt a small amount of data with a password derived from PBKDF2
5
Are PBKDF2 derived keys related if only the number of iterations is changed?
3
HKDF: ikm, salt and info values
3
Are two keys derived from the same password vulnerable to a related key attack?
1
Best practise for encryption in a password manager
1
Question about PBKDF salts and cryptographically secure randomness