I'm struggling with understanding this part of the literature:

It can be assumed that the entire ciphertext AND plaintext is known. 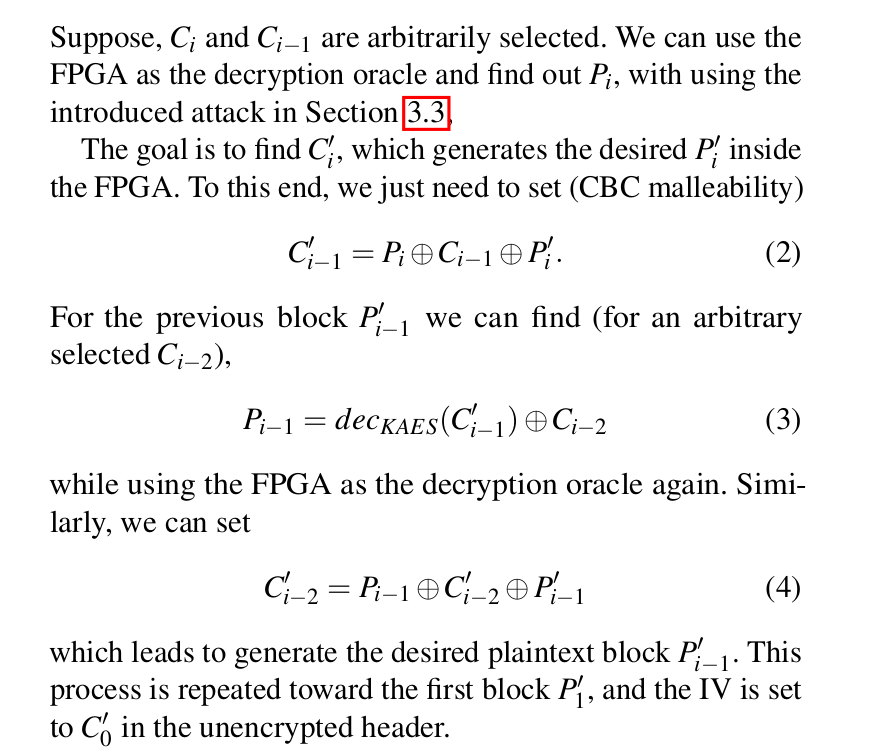 Why does it say in equation (2) say that we can generate the desired ciphertext of the previous block this way?

I don't really get equation (4) and why is it different from equation (2)?

As we know this will make the decryption of $C_{i-1}$ as a garbage block ( random block). But we started with a random block, too. Similarly, as the first step, request decryption then adjust the previous block;

In this way, we repeat to the beginning where the last adjusted value is the nonce of the CBC mode.

The Unpatchable Silicon: A Full Break of the Bitstream Encryption of Xilinx 7-Series FPGAs

HMAC key can also be decrypted using the above technique using the FPGA as a decryption oracle.

Note that for arbitrary selected $C_i$ and $C_{i-1}$ using the decryption oracle one can find out $P_i$.

Then put values into equation \ref{1}

CBC has the chaining so they need to modify to the beginning.

This is also a typo, since

Results of the article

Not the answer you're looking for? Browse other questions tagged aes cbc malleability decryption-oracle or ask your own question.

9
Cipher Feedback Mode
0
AES-128 (cbc mode), is it possible to deduce the IV if the plaintext, ciphertext and key are known?
3
How to break CBC cipher with partly known plaintext?
0
Find first two blocks of plaintext given a final plaintext block, the IV and ciphertext for CBC?
2
Padding Oracle Attack CBC Mode: If the set of characters of plaintext is known, then can you speed up the process