Why does the PAKE ideal functionallity allow the keys to be the same when the passwords differ?

My intuition for the security a symmetric PAKE is supposed to provide comes from the example of a login page. Both the user and the server know the password (assuming unhashed passwords), and the purpose of the protocol is to authenticate both the user and the server to each other using this fact, while simultaneously generating a session key known only to them and avoiding any man-in-the-middle attacks. Specifically, I thought that one of the key properties of a PAKE is that the user and the server would get different keys if they provide different passwords, so a malicious party attempting to log in would be thwarted if it does not know the password. However, this does not seem to be the case according to the security definition. 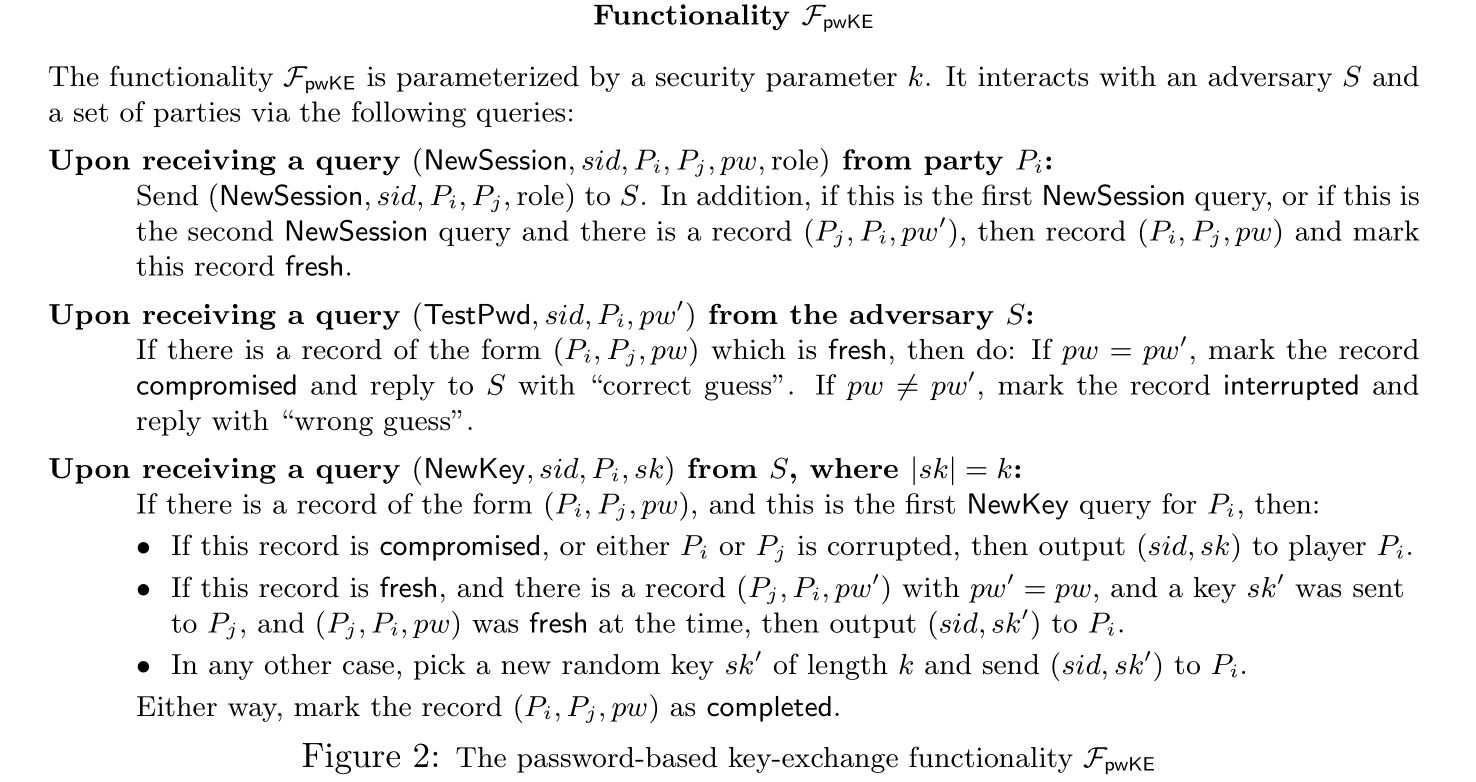 Notice (top bullet under the $\textsf{NewKey}$ query) that if one of the parties is corrupted then the adversary gets to choose the session key $sk$, regardless of whether the two parties provided the same password. By using two queries to $\textsf{NewKey}$, the adversary can set both parties' session keys to be the same. Why would the definition be chosen to allow this? If the passwords differ, the functionality could instead have been written to give the adversary the power to choose only the compromised party's key, and not the honest party's key.

The paper contains text that explains why this is OK. I quote:

However, from your question, I think I understand what you are worried about. If the adversary $P_k$ can set the value of its key with $P_i$ and with $P_j$ then it could seemingly behave like a man-in-the-middle between $P_i$ and $P_j$. However, this is not the case. Specifically, $P_i$ knows that its key with $P_k$ is $sk$, and when communicating with this key, it knows that the communication is with $P_k$ and not with $P_j$ (and vice versa). When $P_i$ wants to communicate with $P_j$, it has a different session key.

Bottom line, the reason that this doesn't matter is that the identity of the other party is given together with the key.

One more note: it may not be absolutely necessary to allow this, but there's no reason to disallow it. Disallowing it may rule out protocols that are perfectly fine. Therefore, it's better to allow it if there's no reason not to.

The question is essentially why the line

is used in the ideal functionality, rather than

This change would make it clear that a malicious user $P_j$ cannot successfully run this protocol to log in to an honest server $P_i$ if it makes an incorrect password guess, even when there is no man-in-the-middle (MITM) attack. I still do not know the reason for the current ideal functionality, but I do know that it is equivalent to the proposed modification when the underlying communication ideal functionality allows MITM attacks. In particular, I will assume that the PAKE, like every PAKE I know of, is based on the unauthenticated channel functionality, where the adversary is allowed to view all of the messages and modify them arbitrarily.

If there is one honest party $\newcommand\honP{P_i}\honP$ and one corrupted party $\newcommand\corP{P_j}\corP$, then $\newsim$ imagines a scenario where $\honP$ is still present, but also there is a second honest party $\newcommand\imagP{P_k}\imagP$ and a MITM attacker $\newcommand\mitmP{P_j'}\mitmP$. Specifically, $\imagP$ inputs a uniformly random string in $\{0,1\}^\kappa$ as its password, and the MITM attacker $\mitmP$ drops and ignores all messages from $\imagP$, instead sending all messages from $\honP$ to the original dishonest party $\corP$ and vice versa. $\newsim$ asks $\oldsim$ to simulate the environment's view for this scenario. It then forwards $\oldsim$'s queries to the ideal functionality, except that all queries mentioning the imagined honest party $\imagP$ are ignored, replaced with replies of "wrong guess" in the case of $\newcommand{\ucsymbol}[1]{\textsf{#1}}\ucsymbol{TestPwd}$ queries.

For the proof of indistinguishability (in the case of one honest party and one malicious party) between the real protocol $\prot$ that uses the communication functionality $\commfunc$, and the ideal functionality $\newfunc$ composed with the simulator $\newsim$, consider the following hybrids, starting from the real world.

After these hybrids, we are now at the ideal world where the simulator $\newsim$ is composed with the ideal functionality $\newfunc$ in order to generate the view of the environment.

Not the answer you're looking for? Browse other questions tagged passwords universal-composability pake or ask your own question.

4
Is public-key cryptography the only option in this scenario?
4
How can one share information using the 'host-proof' paradigm?
3
Asymmetric password encryption - Viable? Which algorithm?
3
What's the principle to design the functionality under UC framework?
3
Public SRP verifiers or public hash chain “public keys” when secret is low entropy password
4
On the security definition of password-authenticated key exchange
0
Issues with Seeding Random Number Generator Using Password
2
Salt for non-stored passwords
3
Is the following PAKE protocol UC secure?