Given ciphertexts C1, C2 of different messages P1 and P2; how can we prove that both C1 and C2 were encrypted using public keys of the same pair?

I vaguely recall reading about a scheme that accomplished this but am not able to figure out which one it was. For the sake of brevity I'm gonna omit any nonces.

P1 is known. It can verified that by performing E(Kpub, P1) the result is indeed C1.

P2 is not known to the observer, but they are provided a proof that they can use to verify that C1 and C2 are indeed ciphertexts that can be decrypted by the same private key (or in other words; were obtained by encrypting using the same public key).

I think ElGamal and NIZK were part of the proof but I'm not sure. Any ideas?

Chaum-Pedersen protocol tweaked with Sigma AND composition should do.

The high level intuition: using Chaum-Pedersen protocol for DH-triple, one can prove knowledge of secret witness $\alpha$ in the following relation in (honest verifier) zero-knowledge:

where $(x,y,z)$ is the statement ("claiming that they are a DH-triple") 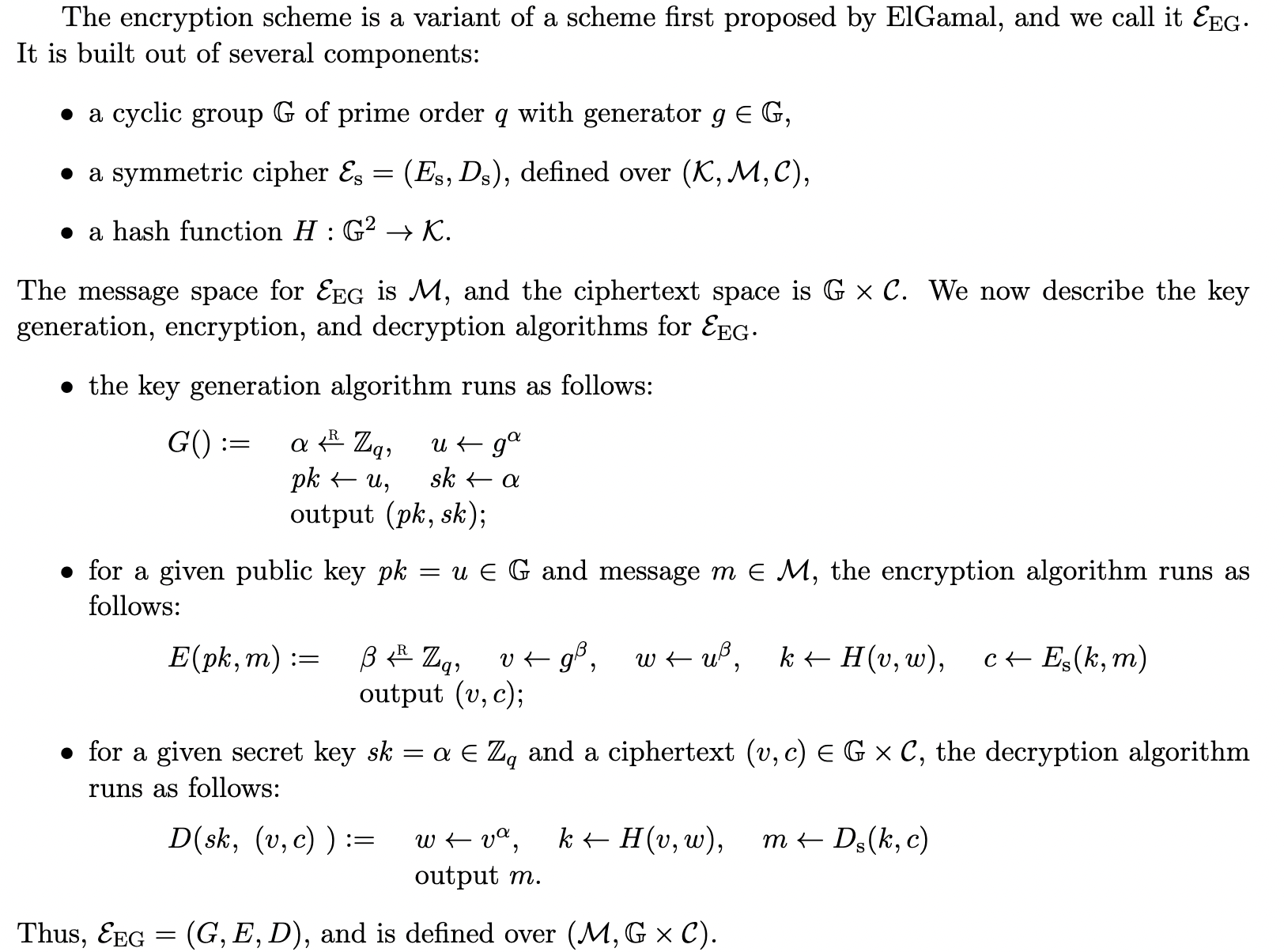 Now let $y$ be your public key and $\alpha$ your secret exponent (secret key), let $x$ be the first part of the ElGamal ciphertext above (namely $v$ in the screenshot), and naturally $z = y^\alpha = g^{\alpha\cdot\beta}$ is the shared secret and let it be the $w$ in the ElGamal encryption process.

With Chaum-Pedersen Sigmal protocol above, we can prove knowledge of a secret key that produce a ciphertext for a certain message.

Finally composing two Sigmal protocols, one for each (message, ciphertext) tuple, using AND-proof construction, the verifier could easily verify that the two ciphertexts are encrypted under the same key as the two statements shared the same $y$. $\blacksquare$

For any given El Gamal public private key pair, every pair of group elements $(a,b)$ represents a legitimate El Gamal encryption of some message.

In other words, for any given $C_2$ there exists some $P'_2$ that encrypts to $C_2$ under the same public/private pair used for $P_1$ and $C_1$. If a different key pair were used, we would have no way of knowing unless there we have some knowledge about $P_2$.

Not the answer you're looking for? Browse other questions tagged public-key zero-knowledge-proofs protocol-design elgamal-encryption verifiability or ask your own question.

8
Zero Knowledge Password Proof
3
How can two UProve token holders prove to a 3rd party that they aren't the same user?
3
Decrypt a public encrypted message and Sign a signature, how the math is different?
1
Is there a administrator key that can decrypt all ciphertexts encrypted with different keys by different persons in a group?
1
Can I prove that a message is part of a set of known messages without disclosing the message?
3
Is it possible to see whether different EC encrypted messages are (likely to be) encrypted on the same public key?
1
How to find the secret key and nonce from two messages encrypted using the same nonce?
0
How can I prove I'm the recipient of an encrypted message without revealing my identity and the message?