Is this a valid AES instruction reordering?

I'm trying to understand a verilog AES implementation. I know the order of the AES encryption steps to be as shown: 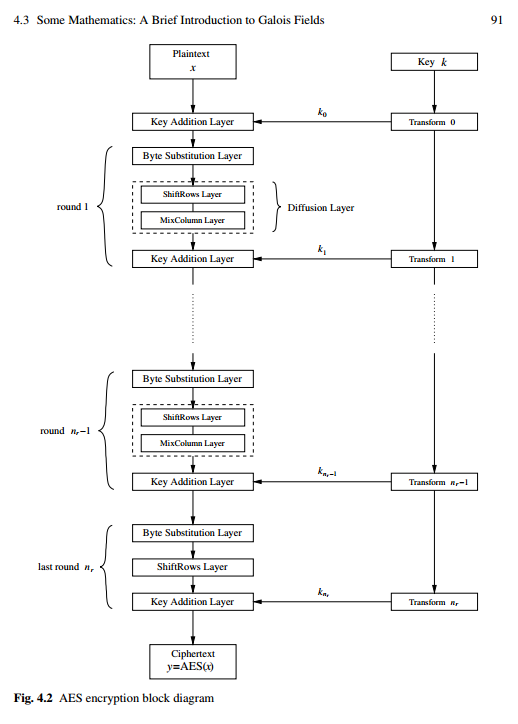 However the code I see doesn't do this. They do the following flow graph: at the beginning of the encryption state is loaded with newstate or the plaintext. The round is set to max and is decremented each round.

They then do the following set of operations for each round until round reaches 0. The internal variables are inside brackets and the operations are without.

They select the output of each round based on the round variable, this is used to set the newstate which sets the new input state:

The problem I'm having is I'm expecting to see the operations Sub, Shift, Keyadd for the last round (0 in this code). But that is not what it does and even taking the output of round 1 and seeing that as the 'last round' is wrong as that does a double key add.

Are you sure round is getting decreased? The counter reminds the decryption setting. You also probably missed the AddRoundKey somewhere. Otherwise the description looks correct.

Not the answer you're looking for? Browse other questions tagged encryption aes or ask your own question.

2
Confused with the role of AES round keys
5
Help with breaking AES reduced to 2 rounds
1
What makes an open source encryption algorithm safe?
9
How does AES introduce confusion and diffusion?
2
Is this an acceptable way to increase the block size of a block cipher?
4
Confusion and Diffusion in the AES functions
2
AES with no SubByte - recover the key
1
AES attack 4 rounds
0
AES and the Feistel Structure Used Together?