I seek a quantitatively better proof of theorem 13.11 in Katz and Lindell's Introduction to Modern Cryptography (3rd edition) (or nearly equivalently, theorem 19.1 in Dan Boneh and Victor Shoup's freely available A Graduate Course in Applied Cryptography). The proof is about the Schnorr identification scheme for a generic group $\mathcal G$ of prime order $q=\lvert\mathcal G\rvert$ and generator $g\in\mathcal G$, for the claim:

If the discrete-logarithm problem is hard relative to $\mathcal G$, then the Schnorr identification scheme is secure.

Can we reach a more quantitatively convincing reduction to the DLP ?

This is my attempt, for criticism. I claim we can solve any particular DLP in $G$ with expected time $2t/\epsilon$ (and with probability $>4/5$ within time $3t/\epsilon$), plus time for identified tasks, assuming an algorithm $\mathcal A$ that identify for a random public key in time $t$ with non-vanishing probability $\epsilon$, and $q$ large enough we can discount hitting a particular value in a random choice in $\mathbb Z_q$.

First we build a new algorithm $\mathcal A_0$ that on input the description of the setup $(\mathcal G,g,q)$ and $h\in\mathcal G$

Algorithm $\mathcal A_0$ is a PPT algorithm that for any fixed input $h\in\mathcal G$ has at each run probability $\epsilon$ to outputs $(u,r,s)$, because $\mathcal A$ is run under the conditions defining $\epsilon$. 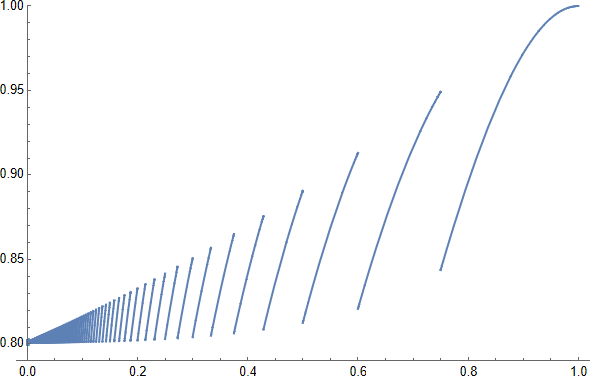 This is the best rigorous analysis I could come up with -- it uses the Splitting Lemma, but decided to type it up anyway hoping someone might find it useful (please feel free to point out any errors).

(The analysis below is for a fixed DLP instance, but the ideas can be extended easily.)

Here, $\sG$ is the set of 'good' random coins in the sense these lead to the adversary being successful and $\sB\subseteq\sG$ is the subset of 'better' random coins in the sense that a rewind and replay using these coins is likely to be successful. The first conclusion of the lemma is that a good coins is better with probability at least $\beta/\epsilon$ and the second conclusion is that resampling a better coin will lead to a good coin with probability at least $\epsilon-\beta$.

Let me try to answer your question:)

First of all, according to your description(I did not have the book you mentioned), this question belongs to provable security theory. The general idea of provable security is that: assuming that there an algorithm/adversary A can break a crypto-based scheme with non-negligible probablity e, then a simulator/challenger S can solve an instance of the mathematical problem, the scheme is based on by interacting with A with non-negligible probablity **e' <= e** determined by failure probability.

In a simulation world created by simulator, the simulator can have some super power, by which it could solve an instance of a hard problem in real world according to the output of the adversary. The super power in the above proof is so-called rewind, a famous rewind simulation lemma, to extract secret value from adversary's outputs.

Now, let's take a look at the original proof. To sovle the DLP, the simulator rewinds A at the step 3. That is the A was ran twice, therefore the probability of successfully extracting x is $e'=e*e=e^2$, due to this being a continous event. Furthermore, in the step 3, the probability of $r_1=r_2$ is $1/q$. So, we also need to minus $1/q$ to fix the final sucessful probability $e'=e^2-1/q$.

The process of security proof is a kind of thought experiment, like Schroedinger's Cat(maybe not appropriate), we have no need to put it into a real experiment. It is sufficient that we just reduce the security of the scheme to one or more hard problems.

The proof process you claimed is very interesting and out of my knowledge. There was a wonderful book to further understand provable security.

Not the answer you're looking for? Browse other questions tagged provable-security schnorr-identification or ask your own question.