Basically it is said that The main differences are that a KDF does not expect a fully uniformly random secret as input (as long as it has enough entropy).

Uniformly random means that all possible values are equally likely. Where "all possible values" would be those in some set which, when not otherwise defined, is the set of bitstrings the size of the variable considered.

An example on non-uniform input to a KDF is when the KDF is fed with the result of a Diffie–Hellman key exchange in $\mathbb Z_p^*$ with $g$ a generator of that whole group. The input of the KDF could be the value of $g^{a\,b}\bmod p$ expressed as a bytestring (e.g. big-endian) of fixed size (that of $p$, rounded up to a multiple of 8 bits), with $a$ and $b$ random ephemeral secrets. Some bytestrings that are valid at the input of the KDF can never occur in that actual use: the input bytestrings that do not represent an integer in $[1,p-1]$, including the all-0x00 and all-0xFF bytestrings. And among those that can be reached, quadratic residues (reached when either $a$ or $b$ are even) are three times more likely than non-quadratic residues (reached when $a$ and $b$ are odd).

Another example on non-uniform input is a passphrase, which is a common input for some KDFs (such as the modern Argon2 or the obsolete PBKDF2).

A process generating a $b$-bit bitstring $X$ has $b$-bit entropy (for either definition) if and only if it generates uniformly random bitstrings. When non-uniformly random, it's entropy is less than $b$-bit, down to $0$ when it always generates the same bitstring.

Informally, there is enough entropy at the input of a KDF if the output of that KDF is essentially uniformly random (for more or less stringent definition of that). That's possible when the input of the KDF is not uniformly random, but only if that input has (min-)entropy at least the KDF's output width of $b$ bit (or at least $b$ such that $2^b$ defies enumeration by adversaries). And then that's not strictly a sufficient condition.

This is randomness with a non uniform distribution illustrated as a probability mass function (PMF):- 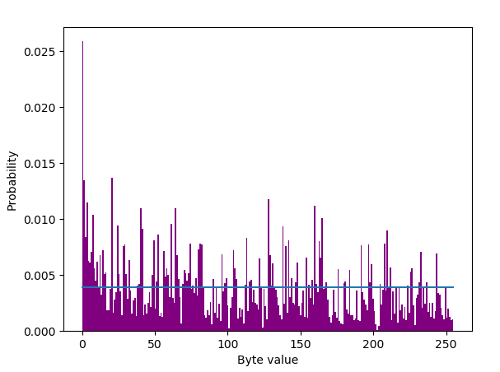 Had the PMF been uniformly random, we'd have $H_{\infty} = 8$ bits/byte. This is maximal entropy which is characteristic of uniform distributions.

Not the answer you're looking for? Browse other questions tagged random-number-generator key-derivation randomness entropy or ask your own question.

10
Are there any authoritative definitions of "key stretching"?
6
Using chi square for distinguishing between compressed and random data
3
Which PRNG security requirements do I need for key generation
6
Is this a good entropy collector and whitening technique?
7
True Random Number Generator by milliseconds per keystroke (TRNG-Kms)
3
Derive cipher IV and cipher Key using PBKDF2 with random salt?
15
What is the difference between TRNG and CSPRNG?
5
Entropy preservation through cryptographic hash function
3
Distribution of the Difference of Uniformly Random Elements