Do people manually select every integer used in a crypto hash function or are they generated by a computer? 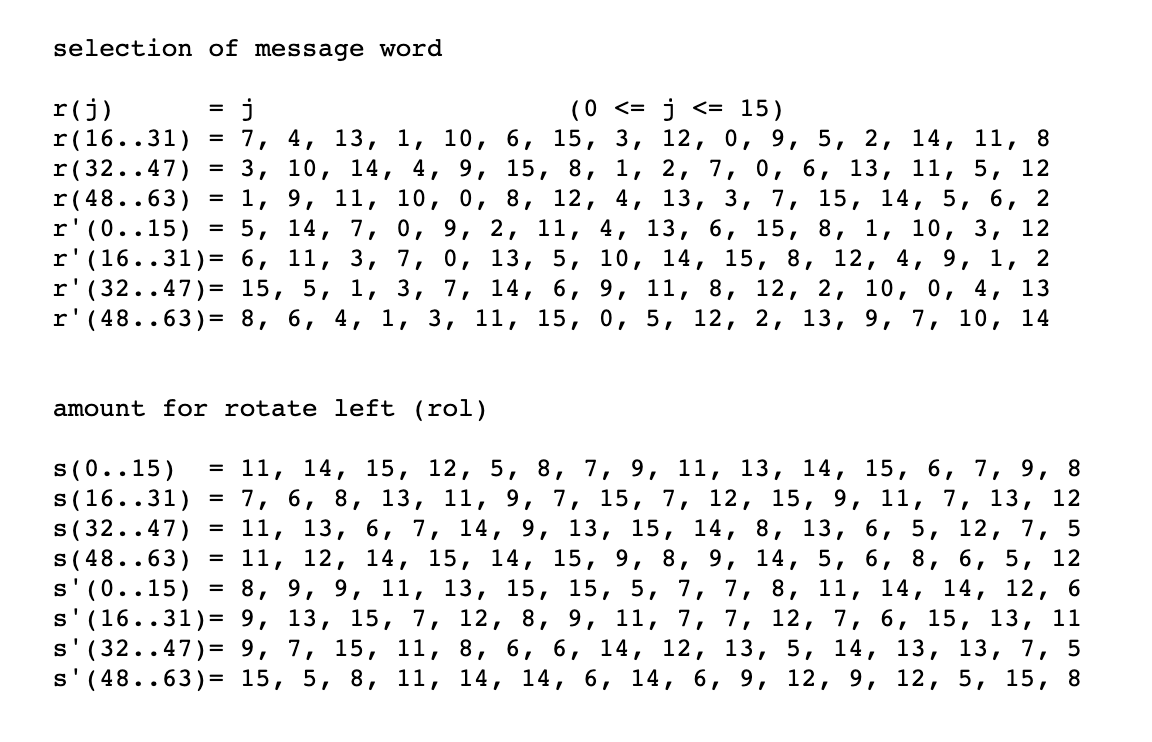 Generally no. In cryptography, the appearance of "random" strings of numbers is generally quite suspect --- what if there are certain "weak" choices of numbers that yield the entire construction insecure? How do you know the designer didn't use their freedom in choosing these numbers to embed a backdoor? Note that this does happen, famous examples are:

Note that there are certain "arbitrary constants" that are seen as less suspect --- common choices are the digits of $\pi$, or things of this sort (say the digits of $\sqrt{2}$ or $\sqrt{3}$). These are often called nothing up my sleeve numbers, and can be reached for when the designer just needs some arbitrary numbers that satisfy some minimal constraints that "most" numbers should satisfy.

Anyway, returning to RIPEMD. It was initially specified in the 1995 paper "Integrity primitives for secure information systems." (I found this info via this link). In particular, the specification is contained in this document. I draw your attention to page 75 of the document (on page 7 of the pdf).

This explains the constants in the added constants part of the file you linked --- they are nothing up my sleeve numbers. Unfortunately, the particular table you ask about is not satisfactorily explained. The authors state that they reproduce a modification of the compression function of MD4 (including the table you noticed), but simply state that they include modifications of B. den Boer, which they cite as Personal Communications (so their particular reason for the modification is unknown).

Unfortunately, other material on the cipher is not enlightening either. Consider this attack on the hash. The authors mention (as is readily apparent) that the "selection of message word" indices must specifically be a permutation (this was mentioned in the initial specification as well), but it is not clear why those particular permutations were chosen.

The last thing that I will mention is that sometimes you are in a situation where there are many possible choices of some structured object (like a permutation, so you cannot hope the digits of $\pi$ will suffice), and you need to pick one. One strategy you can do (rather than pulling it out of thin air) is:

The AES designers justify this choice (and others which you may find interesting) in section 7 of their proposal.

So they appeal to some ordering by authors other than them. I have also seen (and thought I had for AES in particular) the choice to:

Of course, this is unfortunately not useful for your particular table.

2
Estimating random number entropy for input into 256 bit hash
2
Combining Random Hashes - avoiding collisions and ensuring randomness
2
Can you use a hash as a password?
4
Hash function used to find duplicate data, at what point is the risk of a chance match sufficient to switch to a stronger hash or bytewise verifying?
3
Mechanism to get 10 pseudo-random positive numbers up to maximum from a seed (32-byte hash)?
1
Best way, how to convert 32-byte Keccak hashes to positive numbers up to maximum?
0
How might one create a system of election by lot (sortition) that is both secure and verifiable?
2
Toy one-way hash function for six digit number
5
If a new hash function were made that simply truncated sha-256 to the first N bits, how much insight would it provide into sha-256?