First, I want to know what is the logarithm used in the following system of equations (from the paper Flexible and Robust Privacy-Preserving Implicit Authentication - Domingo-Ferrer, Wu, Blanco-Justicia): 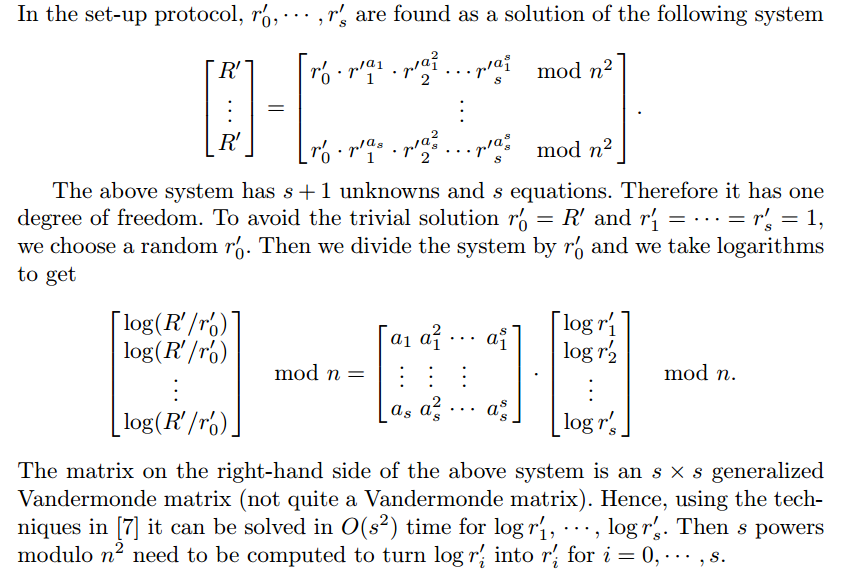 There are serious errors in the fragment quoted in the question, which is (an appendix of) the paper: Josep Domingo-Ferrer, Qianhong Wu, Alberto Blanco-Justicia, Flexible and Robust Privacy-Preserving Implicit Authentication (in ICT Systems Security and Privacy Protection, Volume 455 of the series IFIP Advances in Information and Communication Technology pp 18-34; also in arXiv:1503.00454).

we used straightforward Gaussian elimination which takes time $O(s^3)$, although, as mentioned above, specific methods like [7] exist for generalized Vandermonde matrices that can run in $O(s^3)$ (such specific methods could be leveraged in case of smartphones with low computational power).

Even with Gaussian elimination, I am left puzzled at the description of how the authors proceed in the setup phase. My best guess is that their $\log$ really is discrete logarithm to base $g$ in the multiplicative group $\bmod n^2$ (where $g$ is some generator, possibly the same as in the public key); but in that case, the linear system obtained won't be $\bmod n$ as written: an appropriate modulus $m$ would be one with $g^m\equiv1\pmod{n^2}$, and there is no reason that $g^n\equiv1\pmod{n^2}$. I'm cautiously optimistic that using $m=\lambda(n^2)=p\cdot q\cdot\operatorname{lcm}(p-1,q-1)$ would be a step towards reason (note: $\lambda$ is the Carmichael function).

But I see another issue: computing discrete logarithm to base $g$ is computationally involved in the general case even with factorization of $n$ known, we have not been told in appendix B to choose $p$ and $q$ making that operation easier, thus I do not see how we could (as told in section 4.1, Set-up item 4)

as to match the system of equations in the question, by the reduction to a linear problem that (my reinterpretation of) the paper suggests.

I find the paper lacking on many more points than exposed above; among such pitfalls:

Not the answer you're looking for? Browse other questions tagged authentication or ask your own question.

7
What is “Implicit Authentication”?
3
Setting protocol parameters to achieve concrete security
12
Is there a way to make RC4 (ARCFOUR) secure, or is it completely broken?
4
Difference entity authentication and implicit key authentication
1
What is the best way to share a shared secret key over HTTPS to be used for HMAC authentication?
4
Key derivation of public key without knowledge of private key
2
Is this authentication system insecure or not
0
SRP with random, but constant private-value b